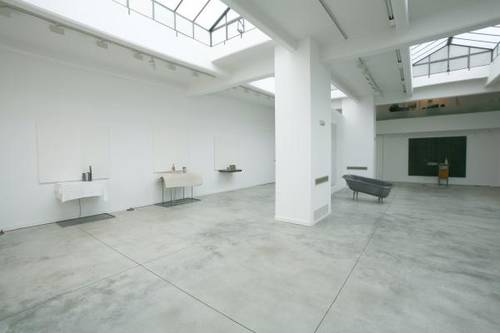 Both the Galleria Cardi and the Galleria Stein will be exhibiting in Milan a completely new series of works by Pier Paolo Calzolari. These works, created after an interruption due to a series of engagements by the artist abroad, are all concerned with meditation in albis, one as luminous and regenerative for the eye as it is rigorously disciplined and calibrated by a sculptural topos. This is underpinned by the metaphysical feeling and the ghostly aspect of the objects which have been a constant in Calzolari’s work. In all their nakedness, his newest forms - in lead, iced copper or marble and displayed on bases, shelves and tables covered with bright white cloths or placed directly on the floor – always seem to be in dialectical opposition to referential surfaces. These surfaces consist of large and virtually monochrome white pictures as though to suggest that the space of painting is to be identified with that of the theatre. This new ‘anatomy lesson’ by Calzolari does not deal so much with the pathetic body of still-lifes viewed with an awareness of the Manner, of David’s neo-Classicism or Morandi’s metaphysics but, rather, with its own repertoire of forms by now quite detached from their original Arte Povera matrix. So we are dealing rather with language than with the ‘historicized’ aspects of form. However, for some years now Calzolari has been undertaking similar inquiries with the use of wax and wicker to create ornaments which are no less ‘luminous’ and amazing because of the way they highlight the simplicity of plastic organisms. And just like then, what is underlined in Calzolari’s work today too is the spatial and philosophical relationships, both static and dynamic, of his forms: from table to picture, and from the shelf back again to the picture, spreading all around a sense of sensuality and existential expectation. Having completed his studies in Bologna, Calzolari began his career in 1965 in the Studio Bentivoglio with his performances Il filtro and Benvenuto all’angelo. These brought him to the attention of the most attentive viewers, in particular those who were critical of current visual culture and were about to launch Arte Povera. Since then Calzolari’s work - as a result of his unmistakable style which sets off iced surfaces against neon lights, and makes use of salt and felt, as well as moss, soot, tobacco and the petals of flowers - has been seen in all the major international shows from Documenta in Kassel to the Venice Biennale, as well as in the most important museums and collection throughout the world.