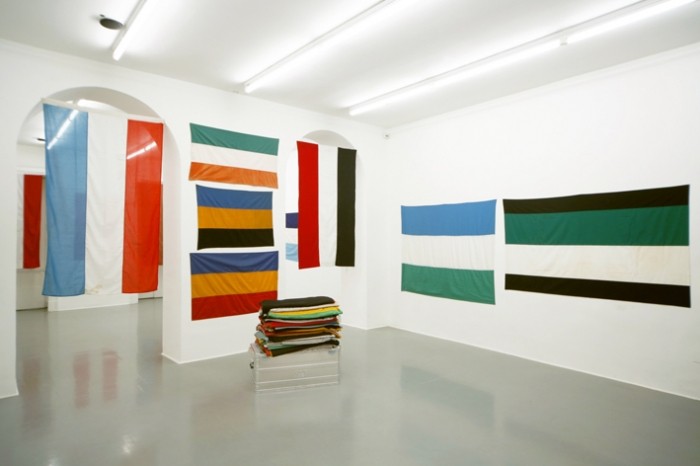 Galleria Fonti presents, Saturday 12th October at 12.am. at Vulcano Solfatara in Pozzuoli, the opening of a new exhibition by Daniel Knorr called Vulkanstr.

Artist Daniel Knorr, who has been living and working for a long time in Berlin, decided to call Vulkanstr. his double feature show in the gallery in Naples and in Vulcano Solfatara, the amazing naturalistic oasis in the area of Campi Flegrei, among fumaroles and volcanic phenomena, yet active for 4000 years.
At Solfatara, in the ancient 'Sala del Bianchetto', (where, since the beginning of the twentieth century, alum rocks, sulphur and Bianchetto extracted from this volcanic ground were kept safe in big vases), there will be on view “Instant Community”, while at Galleria Fonti, will be from October 22 two large works on display: “Site Inspection” (2005) and “Nationalgalerie” (2008).
“Instant Community” is a work where at the opening of the show, the artist starts to unroll an aluminium bobbin wire passing it to the viewers inviting them to participate in unspooling the reel. The wire is soft and can be modeled by the spectators. The work relates to the practice of Edward Krasinski and minimalists like Piero Manzoni and Carl Andre, allowing the materialization of a dynamic group expression. After the opening, the viewers can still change the form and position of the wire. The work materializes further the experience of material in haptic and expansive dynamic way, enabling the perception of common consumption and expression in cultural space.

The second part of the exhibition will be on view at Galleria Fonti in via Chiaia 229, from October 22nd until December 7th.
“Site Inspection” is a collection of flags from 33 student leagues of Göttingen. The flags are specked with traces of use in ceremonies and other events or meetings. The work reveals the existence of student leagues and corporations and their connection to flags and colors in relation to German history and present power structures.
“Nationalgalerie“, was first installed at the Neue Nationalgalerie in Berlin for the fifth Berlin Biennial in 2008. The concept of the work was to install 52 flags of Berlin fraternities on the rim of the building, respecting the size of architectural modules, as a color bar code representing a power structure in the state. Implemented at a certain society level in Germany, with strong expansion potential, the student corporations serve nationalist and conservative structures and are hierarchically organized towards certain colors and codes. Large number of corporated students are positioned on high society levels importing the principle of their “colors“ into social fabric. The student leagues are hermetic systems developed through generations connected by tradition, affirming traditional and nationalistic principles.
www.galleriafonti.it