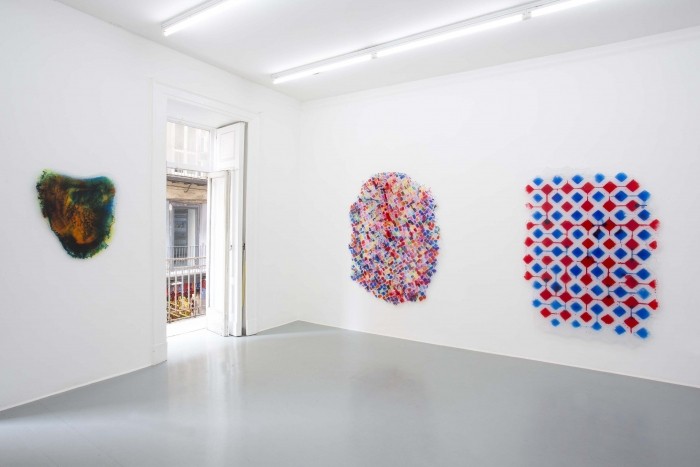 Galleria Fonti is pleased to announce the third solo exhibition in the gallery by artist Daniel Knorr. in which will be presented two groups of new works: Depression Elevation and Capillaire.

Capillaireis a series of acrylic tubes containing different types of poison and displayed forming a circle in the first room of the gallery
The title refers to the capillary vessels of a body. The architecture - the gallery - could be seen as the prolongation state body. In fact architecture corresponds to state standardization and incorporates a biopolitical structure. The presence of poison in a body can have different reasons. It can be used as a so - called antibody (anticorps) in order to boost the immune system and to destroy “foreign objects” like viruses or dangerous bacteria. In the same time it can be dangerous in the body if its concentration is higher than recommended. Continuing the analogy with the state, while on one side the poison controls the society, it can at the same time be dangerous if it gets out of control. (The poison stands also for the “bad” veins in the state body, namely the terrorists and the anti-governmental structures, the antibody as a needed “vaccine” in the governmental play.)

The used poisons have the role of forming the shape of history related to its social, political and cultural background. Poisons have been used to kill statesmen (Napoleon by arsenic), or to control the demonstrans durig riots (Pompidou used teargas against the students in 1968), or birth control (Atropa Beladona as abortifacient agent in east Europe) or Brugmansia as educational tool for naughty children (West Amazone - Chile), just to name a few.
Poisons are designing tools and a kind of biopolitical structure of our society and the work Capillaire is examining the abundance of their use in our common "historic body".

In Depression Elevations Daniel Knorr explores the surface of cityscape using a series of resin sculptures cast from impressions of city streets exhibited in the second room of the gallery.
Knorr’s topographical concern is biopolitical; while infrastructure is produced by the state to facilitate connectivity, it also proscribes social movement and imposes parameters upon a population. The city’s vast and complex network of roads leaves an indelible mark upon the wide, flat plane of the cities, begetting a cultural landscape dominated by car culture and urban sprawl.

The hollows of the street, however, worn by the ravages of time and human use, provide a small footprint of the city’s past. In casting from these puddles and potholes, Knorr catches history in his mold, engendering form and substance from a literal void. The resultant sculptures derive an evocative power not from their undeniably beautiful façade, but from the intimate aura of a swiftly fading past.
www.galleriafonti.it