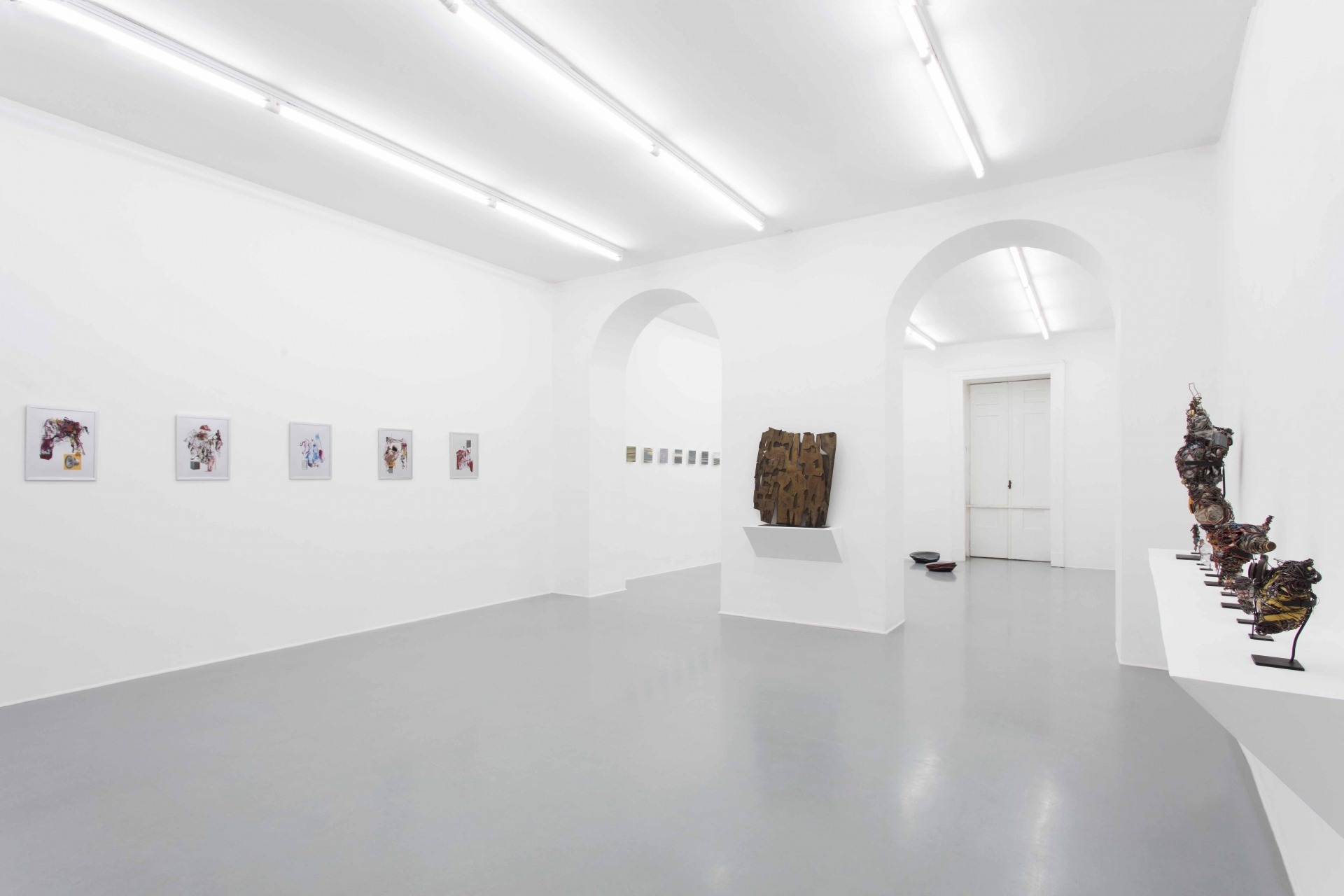 The project - whose title is taken from the sculpture "Colloquio Mitico" (1959) by Pietro Consagra - creates "unexpected conversations" between artists from this century and the past one through different ways and media: Consagra, Marti and Wireman using sculpture, Capogrossi and Patane using painting, Thorel using photography, they all investigate the concept of abstraction. A thematic that unifies different practices. It is a rhizomatic path, to cite Deleuze and Guattari that in A thousand Plateaus invite "to practice a multiple and horizontal concatenation through the logic of closeness and of contagion (never of filiation or descendance)".

Colloquio Mitico by Pietro Consagra (Mazara del Vallo, 1920 - Milano, 2005), is a sculpture realized in two editions (one is part of the Peggy Guggenheim collection in Venice and the one exhibited in the gallery comes from a private collection). The work is part of the sculpture series in bronze "Colloqui", realized by the Sicilian artist at the beginning of his career between 1952-1963. "Abstract sculptures characterized - as the artist liked to say - by the research of the frontal using an innovative reduction to a one point of view". Achille Bonito Oliva in “Scultura Consagrata” writes:« Sculptures by Consagra occupy another space, the one related to the imaginary of the viewer. [...] Therefore the possibility of a non-imposed dialogue but a stimulated one was born. Art has that aim, to produce signs and avoid signals» (text taken from the video "Artists in the mirror" dedicated to Pietro Consagra and produced by Rai in 1987).

Giuseppe Capogrossi (Roma, 1900-1972) is known for his straight and personal abstraction characterized by the reiteration of only one form-sign which, from 1950 on, made him famous all over the world. In the show will be exhibited Superficie 535 (1961) - from private collection - which comes from the series of canvases which represent the passage of the artist from figurative to a personal sign abstraction. Superficie 535 was the image used in the manifesto realized in occasion of the X Quadriennial in Rome in 1973.

The presence of Philadelphia Wireman in the show represents a special case in the XX century art history. Behind "the man of wires of Philadelphia” - that's how he is identified - there is a mysterious unknown American artist who represents an example in the wide territory of the Outsider-art. The story is curious. Between the end of 70s and the beginning of 80s in a neighborhood of Philadelphia next to a dumpster there were found some boxes containing many objects ( about a thousand, mostly of small sizes) made with recycle materials tide together with iron wire. " In few hours the boxes and their content went from that suburb alley to the studio of the local University art department director and finally to John Ollman gallery, one of the most important gallery for the Outsiders market. Even today the author of these sculptures is unknown and the case, let's say so, is still unsolved and becomes a real symbol of the outsider-art. The sculptures of the mysterious Philadelphia Wireman has a lot in common with other famous outsiders, like Judith Scott and Emery Blagdon, and many analogies with many masterpieces, like Christo or John Chamberlain” (cfr www.equilibriarte.net/article/424/Philadelphia-Wireman).

The work by Fabian Marti (Fribourg, 1979. Lives and works in Zurich and Los Angeles) - artist who has already done three solo exhibitions in the gallery in 2007, 2011 and 2015 - consists in using, often in ironic and desecrating way, symbols, allegories and representations of pagan and religious ancient traditions and their reinterpretation in the history which often turns their meaning upside down. The artist makes an his own minimal interpretation in terms of form and language of those historical signs. Using computer and scanner he works on contaminations, changing and conceptual concealing. A series of sculptures in ceramics which have lost their original form and function will be exhibited in the show. They play being something else. Are they no working vinyl records or targets? An exercise on different variations of abstract colours and forms.

Seb Patane (Catania, 1970. Lives and works in London), - artist who has already done three solo exhibitions in the gallery in 2007, 2011 and 2014 - focuses on the concept of the physical and mental alteration making a sort of editing remaking and transforming existing elements that generate new narration. That artistic method is a metaphor of the idea of control and possess and a metaphor of the contrast between figurative and abstraction. A series of multi material collages linked to the dodecaphonic and "abstract" visualization of the sound.

Always interested in going beyond the limits of the traditional photographic territory, Paul Thorel can be considered as a ground breaking of the digital use of image, a way followed by him since early 80s. His "memory photographs" of portraits and landscapes, in black and white and provided with a tridimensional depth, become elements of a dizzying manipulation of abstract outcomes. *
* The artist is represented by Guido Costa gallery Turin and Massimo Minini gallery Brescia
www.galleriafonti.it