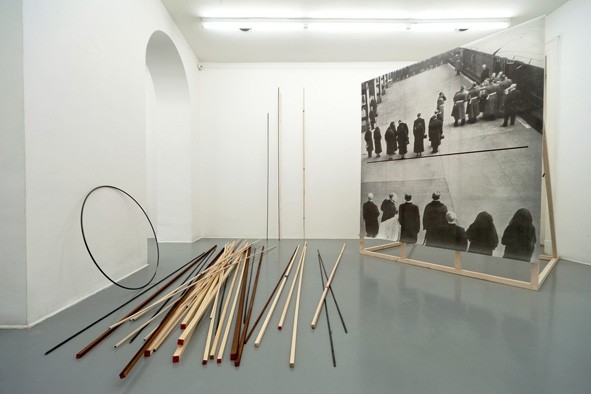 Fonti Gallery is pleased to present “Entrano il coro e gli attori”, Seb Patane’s second solo show in Italy.
The project of the show consists in a series of two and three-dimensional new works, and a new sound piece.
The artist’s concern with the search for what seems to be a particular kind of archetypical imagery, the success or failure of dissent and history and politics past and present achieves a further layer of elaboration through the introduction of newer, seemingly timeless figuration, some quasi-psychedelic complex found patterns, a more organic form of audio stratification and simple sculptural structures that resemble a mixture between theatre props and painting displays.
Ideas of performance and ceremonies get filtered through implicit references to confusional psychological stages, cerebral and physical reminders of mechanism of attack and defence, and nods to the notion of the Jungian hero, and its various stages of development, from the ‘trickster’ through to the conflicting ‘twins’.
Patane’s assemblages and contaminated narrations, with their implications of dance, alcohol consumption and counterfeit violence, also retain an indirect approach to intend theatre and accidental choreography, while aiming to induce the viewer into taking a position of alignment, or resistance, that the artist himself seem to orchestrate in the installations themselves.

«There is a great event taking place in the early part of the year.
Among the jolly followers of the coopers some ridiculous harlequins caper about; one office of the procession is to make a way through the crowd and clear a circular space for the dance. This is done by the men in motley thumping the heads with a rattling rod, which is wielded, however, with more noise than force.

Next come the band of musicians, followed by the main body of dancers, twenty-five fine young fellows, carrying between them the traditional paraphernalia.
The music and the dance begin, the tune being as old as the dance itself.

For more than half an hour the dancers execute a series of beautiful figures, during which men and garlands wind about in constantly changing, ever effective gyrations.
At one point in the dance the quieter of the harlequins stands with a high gilt rod, surmounted with the “orb of power”. This speedily becomes the centre of a colossal royal crown, which the dancers develop, winding nearer and nearer, and successively adjusting their garlands round about the orb in such manner as to complete the form.

Suddenly the music ceases, the scarlet jackets stand back in the circle, divided from one another by the green arches they hold, and the barrel is rolled to the centre and set up on end. Three of the coopers walk around it, beating a tattoo with hammers on its rim, representing coopers at work, and then the head man mounts on the barrel and exhibits a series of graceful juggling tricks, swinging and twirling two hoops, on the inner rims of which are placed glasses filled with wine, no drop of which he spills.
He then proposes the health of the master, and drinks the wine, tossing the empty glass over his shoulder.

The band then plays the whole party into a gay march tune, and, still holding their green arches on high, they file into the nearest tavern. »

(from ‘A Series of Graceful Juggling Tricks, 2011)
www.galleriafonti.it