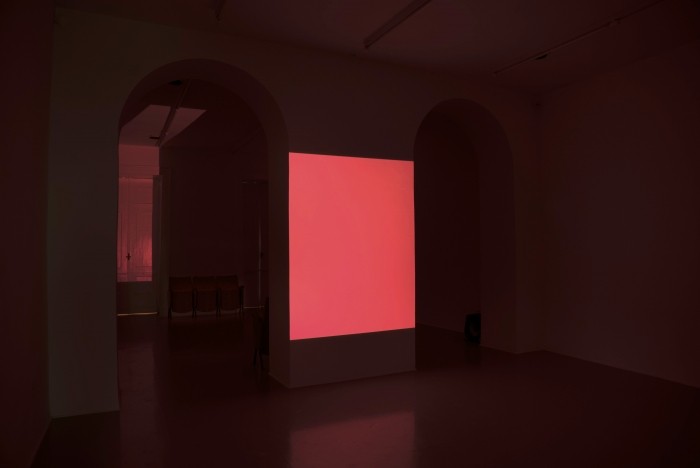 Galleria Fonti is pleased to presentAbdomen, third solo exhibition in the gallery by Seb Patane.

In October 2013, whilst in residency at Wysing Arts Centre, Bourn, UK, Seb Patane met with fellow resident artist Gustav Metzger. The meeting prompted Patane to ask Metzger to be recorded reading a short section of avant garde theatre director Erwin Piscator’s book The Political Theatre (1929), which Patane was reading at the time. In this particular excerpt, Piscator describes the ill-fitting outfit he is forced to wear, minutes before setting off for World War I, a metaphor perhaps of his own reluctance to join the German army.
It is this interest in the shift between reality and altered storytelling, biography and the communal subconscious and the possible manipulation of history and literature that lies at the core of Seb Patane’s practice, with an emphasis on the continuous cycle between performance and authenticity and between seemingly mundane details and ‘higher’ concepts. Patane saw a playful, yet dramatic, potential in the idea of Metzger almost impersonating Piscator’s words, the two men being both German, politically involved and innovative artists, albeit having lead lives separated by time, place and practice.

This short recording was the starting point for the two works exhibited at Fonti: Gustav Metzger as Erwin Piscator, Gera, January 1915, a short monochromatic video/sound work, and Abdomen, a longer, almost suite-like sound piece in which the voice of Metzger again lends an unsettling start, followed by an audio collage including original musical interventions, recordings of the Cambridgeshire countryside, and a reading of a passage from The Good Soldier Sveik, a satirical war novel by Czech writer Jaroslav Hasek (1923), from another Wysing fellow resident artist, Cécile B. Evans. The piece, like the sound for the video, is composed by Patane, with long time collaborator Giancarlo Trimarchi.

Finally, the conclusive part of Abdomen features a short song written by Patane and sung and arranged with Berlin based musician Andrew Moss, a song inspired by Patane’s own occasional bouts of hypochondriasis, but also by the letters of Dante Gabriel Rossetti to Ford Madox Brown about a very ill and dying Lizzie Siddal, “I have been in the most agonizing anxiety about poor dear Lizzie’s heath, she has seemed ready to die daily and more than once a day”(1860).

However, Patane utilizes this juxtaposition between historical and personal source material in order to cross it with contemporary musical references, the process ultimately aided by a kind of psychedelic approach to music making. The artist’s aim is to create a current video/soundscape that hints at timeless and universal notions of ideas of anxiety; this leads towards a sense of lack of control over physical and emotional transformation and the horrors of war, clashes and conflict, albeit hinting at change and a death seen ultimately as renewal, followed by its consequent rebirth.
www.galleriafonti.it