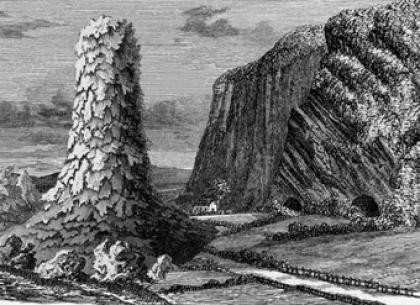 © Salvatore Arancio
Ancient Seacliff Eroded and Pierced at its Base by Sea Worn Caves Fronted by a Lava Column Eight Feet High, 2008
Photo-etching on paper
37.5 x 43.5 cm
Courtesy the artist
(NO) VACANCY

The project consists in recreating the atmosphere of a domestic envinroment in the most realistic way. The space of the gallery will be transformed adding furniture, chairs, sofas, a small fridge, tvs and wallpaper.
The aim is not to establish a remark on the idea of a 'house' or on the relation between private and public space, but to simply create a stage , a scenography for the exhibited works.The works in the show will not be chosen according to a specific topic but instead will be chosen indipendently and following my personal taste. The spectator should have the feeling that he is watching works in an intimate space. private almost as if it was someone's personal collection.
It should be an enviroment to live in where one can sit down, read, listen to music, spend time with the works.
Three weeks after the opening of the exhibition, the show will transform itself and become the container for another project. The editorial office of NERO magazine will move into the same space and will use it as its own office for the remaining two weeks of the show. Within these two weeks it will be presented the solo show of Nicola Pecoraro. This new show will be installed with the works already there and create a dialogue with them.
www.galleriamaze.it