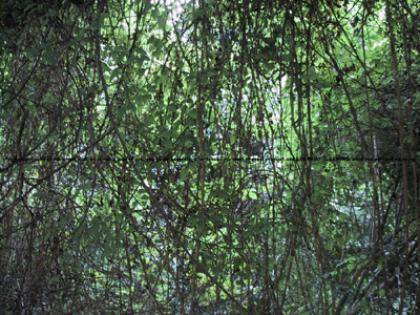 Three years after his last solo show, Galleria Maze is pleased to present Sandrine Nicoletta’s new art project.
From 1998 to 2001 the artist focused on the concept of pause, by using the island’s form to define a field, a privileged room from where to start again stronger and more conscientious. The art works, created between 2002 and 2005, as well as the last show for Galleria Maze in 2003, mt 0,5 ——••• ∞, were devoted to the search of equilibrium trough attempts and experiments.
While same of her characteristic patterns, both visual and conceptual, are at the bottom of the new works, that are inspired as well by the search of a centre and a reason, a change is going on. The attention is focused on rhythm, on the orchestration among different people. The people, between improvisation and determination, can find together the solution or better the direction; slowly, quickly, following their own breath.
The concept of the show is the nunc maxime (now especially), something that happened barely beyond the uncertainty, a state of choice, a step closer to decision where the perspective changes.
On show it will be display photographic projects, installations, videos and a sound work, created especially for the gallery’s space and mounted following the idea of the scale.
Thank to Raum/Xing

Sandrine Nicoletta was born in Aosta, (Italy). Lives and works in Bologna (Italy).
She took part to the Musical Practices research group at the Ircam, Centre Pompidou, Paris, 2003/04 and to many artist residences, as the International Open-Air Expressions, Tokyo Denki University, Tokyo, Japan, 2003, World Views, LMCC, World Trade Center, New York, 2000/2001, Keum River International Art Symposium, Kongju, Korea, 2001,the workshop The mountain, Velebit, Croatia, 2001.
Selected off site projects: Io sono questo, curated by a.titolo and Rebecca De Marchi, Nole (Turin) 2006; Slubfurt City, created by Michael Kurzwelly, Bernardo Giorgi, and Roland Schefferski, Germany and Poland, 2005, International program on Public Art, organized by the European Union, curated by Roberto Daolio and Mili Romano, Paris University 8, France, 2000.
Among her solo shows: Doppler, curated by Laura Garbarino, Galleria Autoricambi, Rome, 2004. Equilibrismi, curated by Elisa Fulco, Ospedale psichiatrico S. Colobano, Milan, 2004. mt 0,5 ——••• ∞, Galleria Maze, Turin, 2003. Surplace, Present Future, Galleria Neon, Artissima, Turin, 2002. Maestri, Nin, Zara (Croatia), 2002. Mistral, Galleria Graffio, Bologna, 2000. Demi-bain, ESBAM, Marsiglia (France), 1999.
The project is an analysis of that exact moment when we react to an impulse, with no fear, facing ourselves in the present time.
This analysis was developed trough an “experiential” full score.
The full score was performed by five singers, from tenor clef to treble clef, recorded in different places at different times. Each singer never listened to what the others have recorded before. They actually did not sung words, but produced sounds, react with the voice on certain situations given by the author.
Something more likes an artistic performance than a singing action.
Afterwards the five tracks have been combined together creating a 21 minutes track in PROTOOLS, with no sound effects.
The final result is an interplay of voices, an abstract sonorous space, disembodied. After meeting and clashing with each other, following settled lines and routes, the voices become pure sound
Interplay has been elaborated and written in August 2006 by Sandrine Nicoletta; produced, recorded and mixed by Massimo Carozzi.
The five singers are: Alessandro Berti, Margareth Kammerer, Nicoletta Magalotti, Valerio Tricoli and Leo Chadbourn.