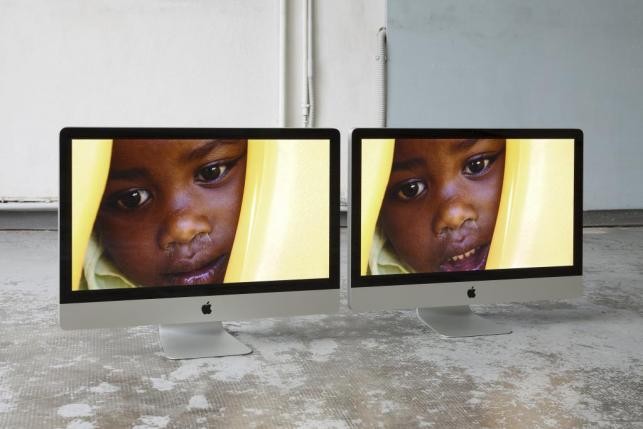 Massimo Grimaldi's work explores the nature of what we call ‘art’, the way that it is perceived, judged, and understood. It is an investigation of the criteria used to produce and circulate images, the power and limitations of aesthetic speculation, the possibility of redefining it in an ethical way.

The exhibition SURFACES is made up of nine new works.

Mariem Before The Image 'Rubine' and Daba Before The Image 'Magnesia' are two hyperdecorative images in front of which two children, Mariem and Daba, are standing, looking back at the viewers watching them. Once absent, their names remain bound to those of the images, recalling their presence and representing their absence.

They Were Mostly Women And Children, They Were Defencelessand They Were Unprotected, They Died Without Knowing Why Or How make up a gratuitously iconic graphical form. The phrases of the title are drawn from a blog that describes the recent massacre in Jos Plateau, Nigeria.

Ryszard Kapuściński Lights consists of the dull and perpetual vertical sliding and semi-rotation of two lights mounted on linear guides driven by a cog mechanism.

February 1990 Playlist is the reproduction of a playlist composed of 20 musical tracks, with 10 minute intervals of silence, in such a way that the previous piece may be forgotten and the beginning of the next one may seem a surprise. This playlist is an apocryphal and sweetened representation of one month in reality lived tragically.

Emergency's Bangui And Mayo Paediatric Centres Photos Shown On Two Apple iMac Core 2 Duos has come about as the result of the awarding of the Adolfo Pini Prize for Contemporary Art then donated to Emergency as a contribution in support of its paediatric centres in Bangui, in the Central African Republic, and in Mayo, in Sudan. As a result of this donation, the two Centres have become the affective subject of the photographic reportage that documents their activities. Emergency is an independent and neutral Italian organization founded in order to provide free, high quality medical and surgical treatment to the civilian victims of war, landmines and poverty.
www.galleriazero.it