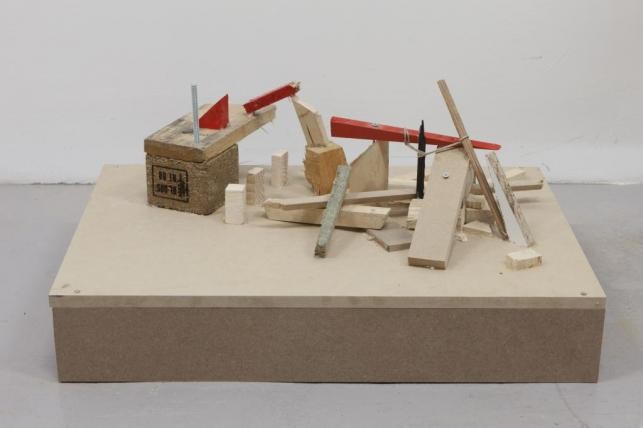 Mixing objects pieced together in his studio, with cinematographic-quality videos, sculptures, images, - things that “function” right before our eyes and echo one another - Beloufa’s work seems to happen "in between", when we suspend disbelief: from a document to a fiction, from a functional object to a sculpture, from a work to another one or to its display context. Neïl Beloufa forces us to undergo a cleansing, and liberating, immersion in a self-contained and playful universe paralleling our own, where what is incidental becomes a full-fledged subject, and where these subjects are as likely to meet as two submarines or two satellites... which seems to happen rather often these days.

More than embodying procedures, Beloufa’s works can be considered as distilling principles. One example is that of not “lying”: we are given a behind the scenes look at every detail so that every trick of fabrication is plainly visible without any illusion. Our interpretation is constantly contradicted, twisted, and destabilized until it only exists in a parasitic relationship with the structural presence of details, medium and even the installation itself.

Closing off the space with green screens, the show constructs itself around Sayre and Marcus(2010), a three-channel video installation. The video shows a number of Americans seating in a circle and trying to find a culprit among them. The music and the circular shots emphasize the narrative tension. The projections are rythmed by subjects, sculptures, objects, and images which open up to potential meanings or an alternative way of dealing with the real. Chicken nugget, a photocopy of a teeneger, a palm tree or half a desk...

These elements appear ruled in the same way, taking the empirical premise that fiction is to documentary what a sculpture is to a functional object. In both cases viewers have to suspend their coherent reasoning, to put a belief in an object, and thus consider it through a higher level. The thing is that (maybe) videos are made to be watched, whereas a functional object is made to be used. This may offer to Beloufa’s videos more authority through the habits of the viewer to watch. In order to balance this authority, the artist chooses to reflect upon this system, working to bring other potential meanings to the videos while keeping the same gestures, like betrayed artifices, or useless pretexts as subjects.

Neïl Beloufa creates a universe of chaos, consisting of images, sounds, and meanings, united in an offhanded esthetic coherence that makes each detail seem like it’s participating in a dissociative design plunging us into a haze of interpretation. We can stand here looking at his works for a long time, looking for references, allusions, or criteria: the pieces of the puzzle have been tossed down before us.