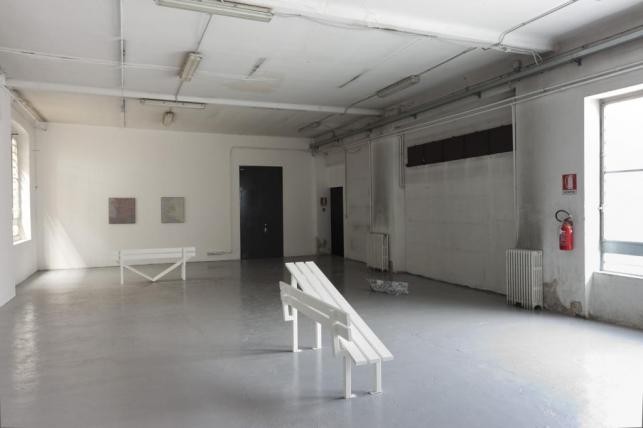 Mikhail Baryshnikov is the best dancer in the world...’

Works by artists from different generations are in dialogue with each other in the fourth presentation of the series partoftheprocess.

In the wait for something to come, there is a feeling of temporal suspension in the first room which is juxtaposed by works where the passing of time is a fundamental element of their formal aspect.

‘Mikhail Baryshnikov is the greatest dancer the world has ever seen...’

Barrow’s expansive works revolve around the structure and geometries of weaving, both as material substrate and conceptual framework. Working on hand-loomed linen that his wife Sarah Parke fabricates, Barrow methodically applies paint corresponding to Parke’s pattern. This collaborative gesture is emblematic of the entire process, a free flow of information and marriage of forms. Just as the distinction between image and object dissolves with each dot placed, so too do the boundaries between antithetical ideas. The empirical and the accidental, the mechanical and the handmade, the systematic and the intuitive are all conflated in a complex matrix.

‘Mikhail Baryshnikov is the greatest dancer ever...’

A sequence of images showing a selection of Parisian scenes, including keys in a locked door, café tables with extinguished cigarettes, outdoor views...). Davey, who took these photos, had mailed them to friends, and the marks of transmission (postage, date stamping, address) they bear suggest that they not only depict but also embody the passage of time and of the travel the images made.

‘Mikhail Baryshnikov is incomparable amongst dancers...’

“Dear Alice, yes I will send you a publication from which viewers are invited to tear a single page and take away...what is left of the book remains with the concrete piece...With the installations I have been producing over the last two years there is always an associated book work...I thought in this case it would work in relation to the single piece the book can simply be dropped next to the sculpture..on approaching the book a closer look of the sculpture is attained...anyway....waiting and reading material”.

Out of investigating architecture, communication, and social behavior in the urban space, a series of bench designs was born under the common title Modified Social Benches. The bench designs borrow their basic form from normal park or garden benches seen everywhere, but are altered in various degrees to make the act of sitting on them a conscious physical endeavor. With their modification, the spaces they inhabit become active rather than places of rest and solitude; they foster exchange between the users and the passers-by, thus lending the work a social quality.

‘Mikhail Baryshnikov is top of the dancers...’
www.galleriazero.it