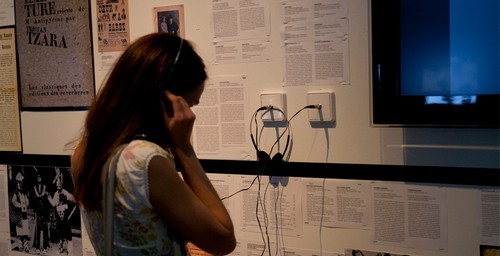 100 Years of Performance, curated by Klaus Biesenbach, PS1 Chief Curatorial Advisor and MoMA Chief Curator of Media and Performance Art, and RoseLee Goldberg, Director and Curator of Performa, will trace the development of performance art over the past century with a wealth of assembled archival documents, photography, film, and audio materials, culminating in a performance festival.

100 Years of Performance (Version #3, Moscow, June 2010) provides a fascinating overview of some of the most significant performance art movements, happenings and seminal works from the Futurist Manifesto in 1909 until the present day. The exhibition includes work by Yayoi Kusama, Yoko Ono’s Cut Piece (1965); Francis Alÿs’ When Faith Moves Mountains (2002); Matthew Barney’s Drawing Restraint (2005).

The curators have created this exhibition as a living and evolving project and invite russian artists and visitors of the exhibition to add their ideas.

Klaus Bisenbach:
"Moscow-based artists, scholars, curators and general public are invited to contribute to the “living exhibition” nature of 100 Years of Performance, by adding performances, happenings, actions and gestures that you consider influential, which happened in Moscow and Russia in the last decade. Your ideas will be added to the growing exhibition and then celebrated at a special performance festival for the closing of the exhibition at the Garage Centre for Contemporary Culture."

Please send your proposals entitled "100 Years of performance" to rsvp@garageccc.com

Biesenbach founded Kunst-Werke (KW) Institute for Contemporary Art in Berlin in 1991, as well as the Berlin Biennale in 1996, and remains Founding Director of both entities.

RoseLee Goldberg is an American-based art historian, author, critic and curator. She wrote a study of performance art, Performance Art: From Futurism to the Present. First published in 1979 and now in its third edition (2001), Goldberg's book is now a key text for teaching performance in universities and has been translated into over seven languages. As director of the Royal College of Art Gallery, London, Goldberg set precedents[citation needed] for exhibiting modern and contemporary performance and organized exhibitions, performance series, and symposia on a broad range of multi-disciplinary artists including Marina Abramovic, Bernd and Hilla Becher, Christian Boltanski, Brian Eno, the Kipper Kids, Piero Manzoni, Anthony McCall, and Christo and Jeanne Claude. Goldberg was curator at The Kitchen, New York, where she presented works by Laurie Anderson, Phillip Glass, Peter Gordon, Meredith Monk, and Robert Wilson and curated the first solo exhibitions of Jack Goldstein, Sherrie Levine, Robert Longo, David Salle, and Cindy Sherman, among others.

Goldberg has curated several performance series including "Six Evenings of Performance," as part of the High and Low: Modern Art and Popular Culture, exhibition at the Museum of Modern Art, New York and Couleurs Superposees: Acte VII, a performance by Daniel Buren, (in association with Works & Process), at the Guggenheim, New York. In 2001 Goldberg commissioned and produced Logic of the Birds, a multi-media performance by Shirin Neshat in collaboration with composer and singer Sussan Deyhim. She is a frequent contributor to Artforum, and her publications include Performance Since 1960 (1998), Laurie Anderson (2000) and Shirin Neshat (2002). Goldberg has two forthcoming books in 2007: PERFORMA, the first in a series of publications to accompany the PERFORMA biennials and Performance Now: New Art, New Dance, New Media published by Thames and Hudson. She was recently named a Chevalier of the Order of Arts and Letters by the French Minister of Culture and Communication.

100 Years of Performance (Version #3, Moscow, June 2010) is organized by MoMA PS1 and Performa. The exhibition is curated by Klaus Biesenbach, Director of MoMA PS1 and a Chief Curator at Large at The Museum of Modern Art; and RoseLee Goldberg, Director and Curator of Performa. The exhibition is made possible by the Annual Exhibition Fund of P.S.1 Contemporary Art Center with generous support from Julia Stoschek. is being presented with P.S.1 Contemporary Art Center, an affiliate of New York’s MoMA-Museum of Modern Art, and Performa (New York).
www.garagemca.org