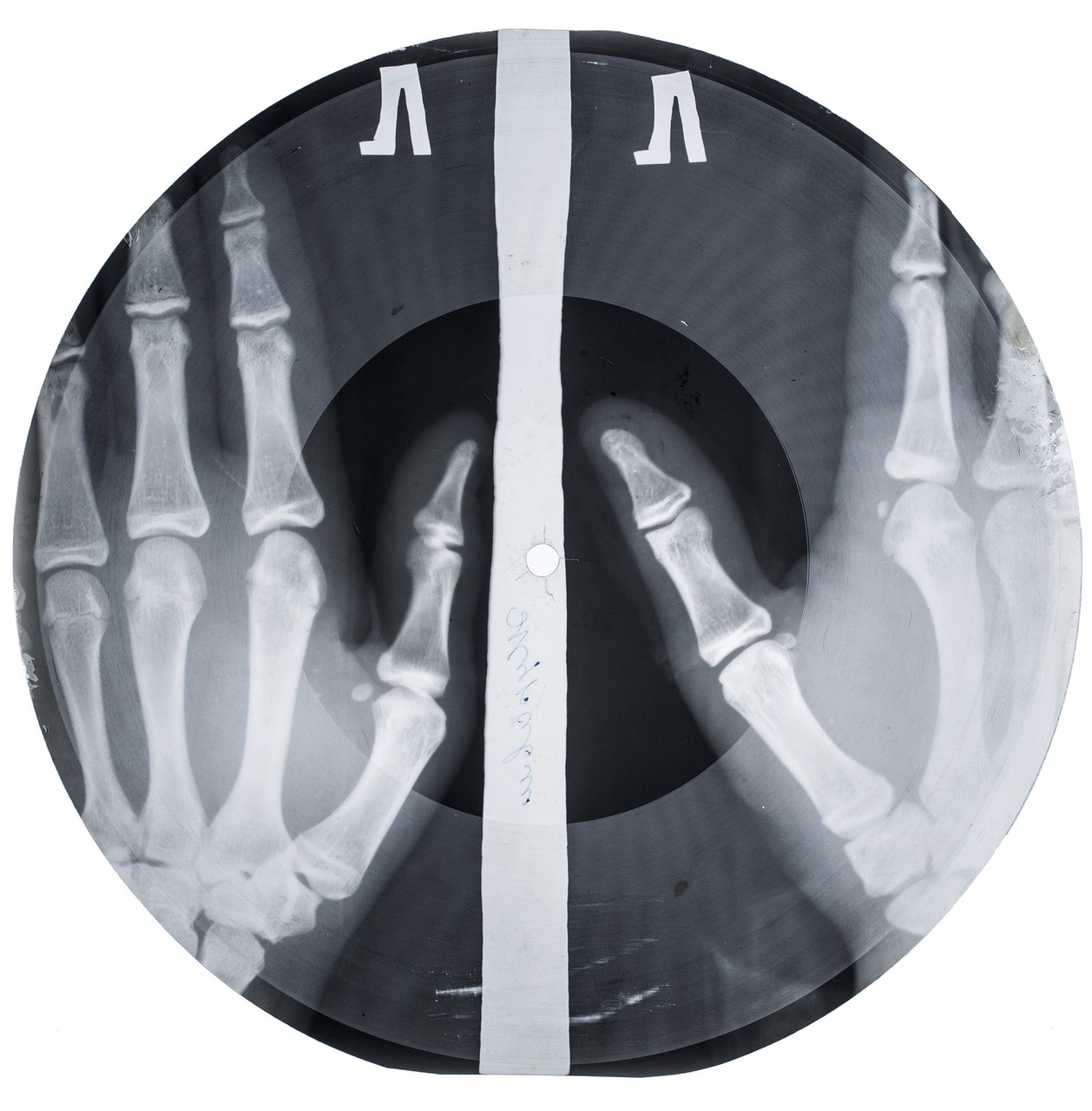 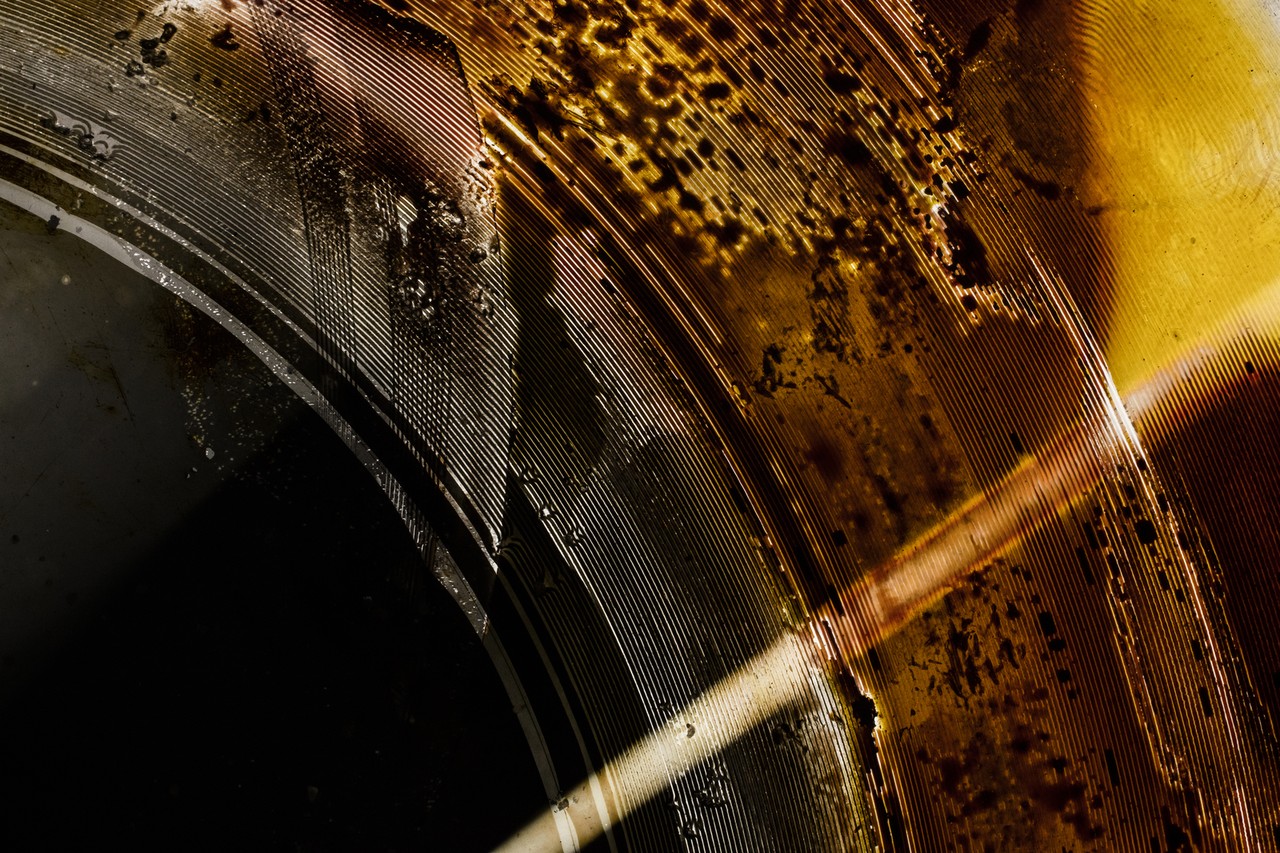 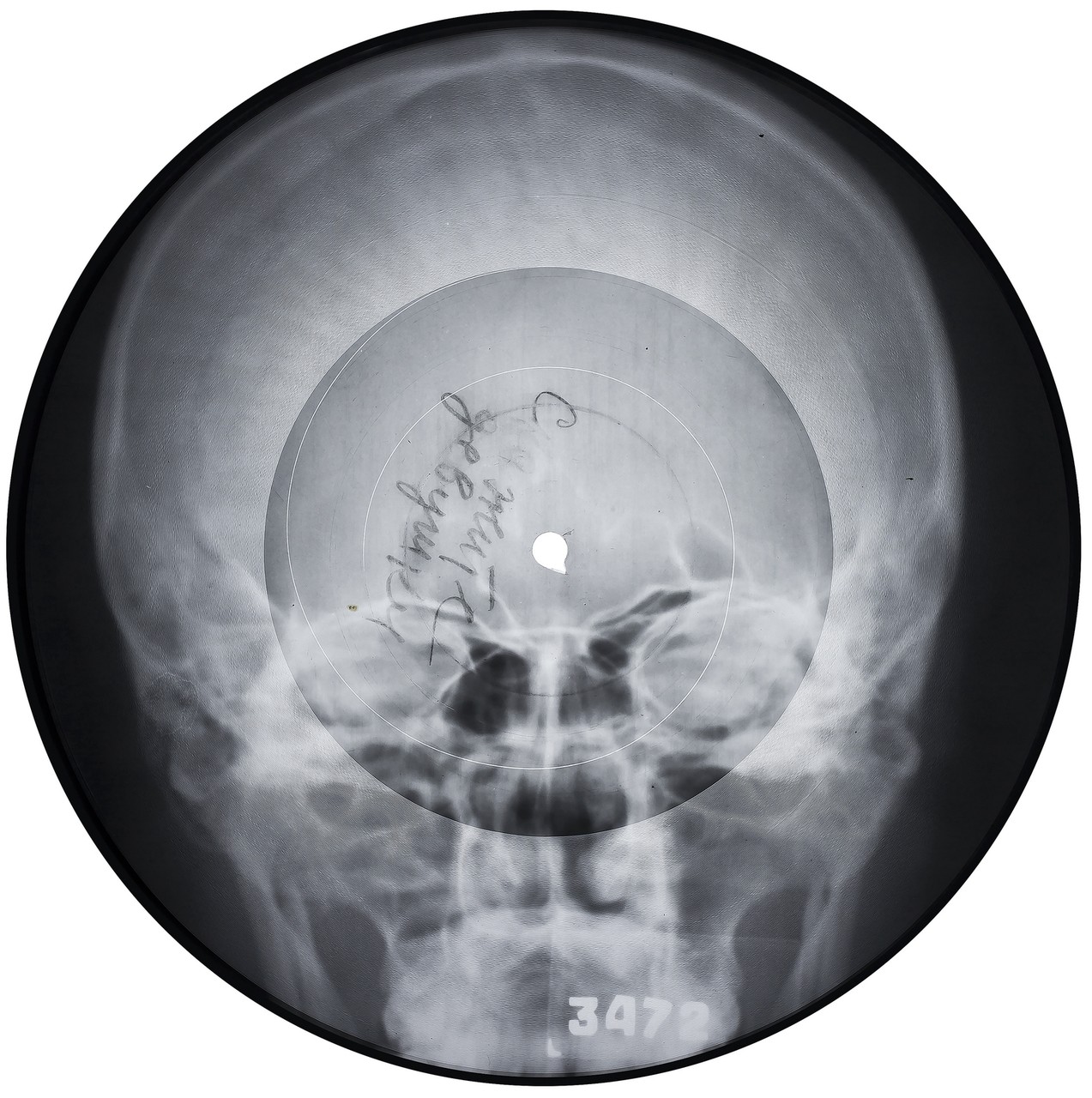 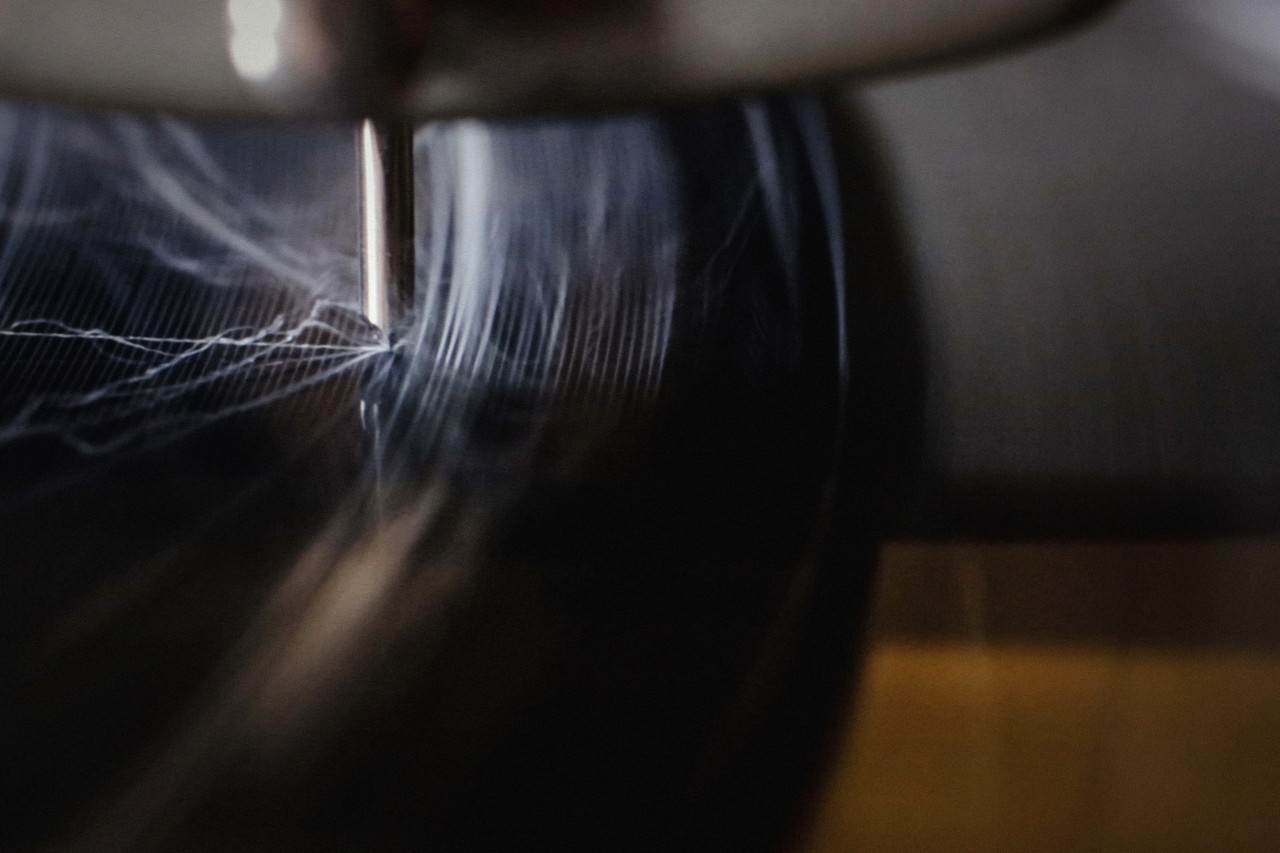 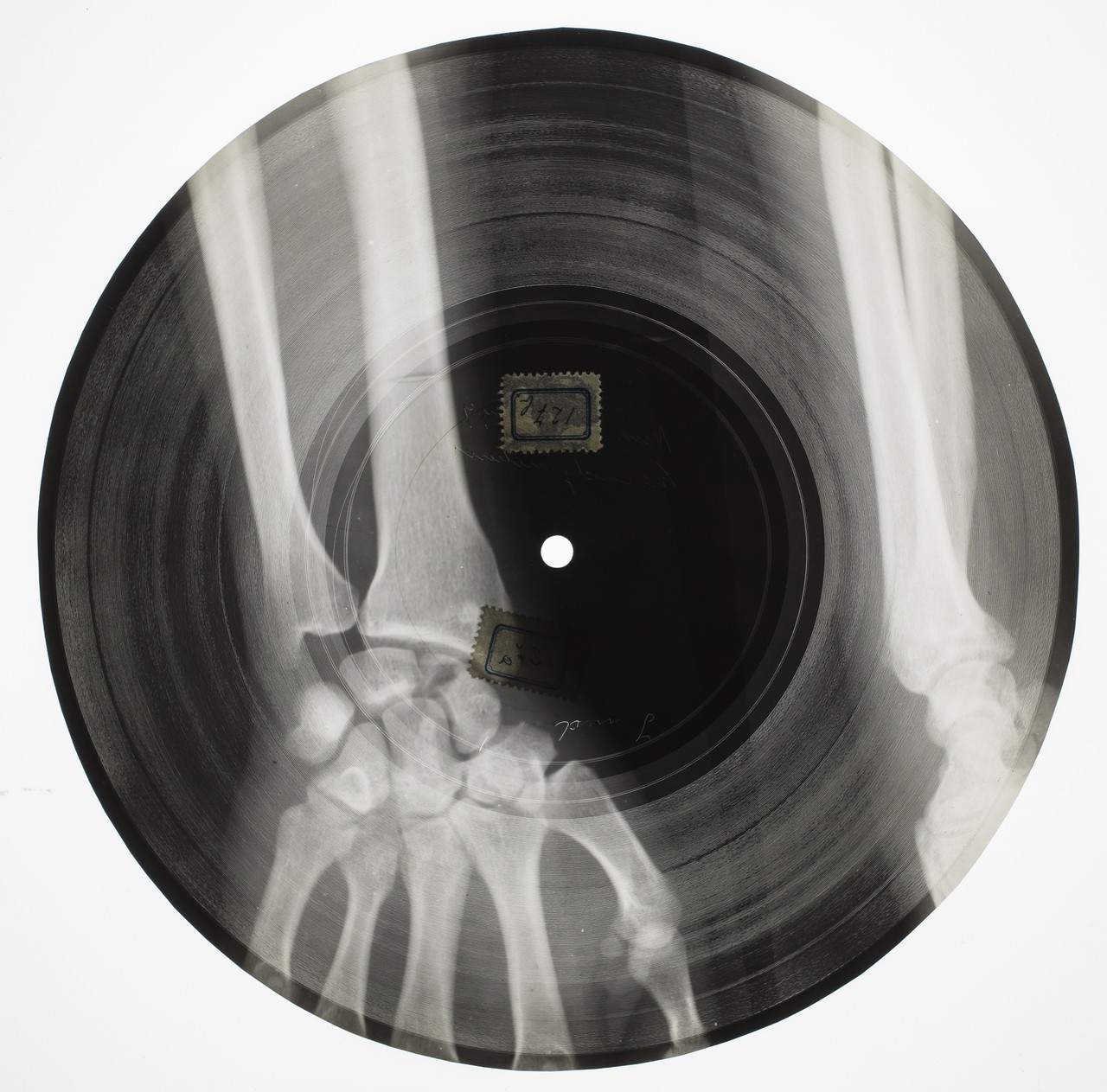 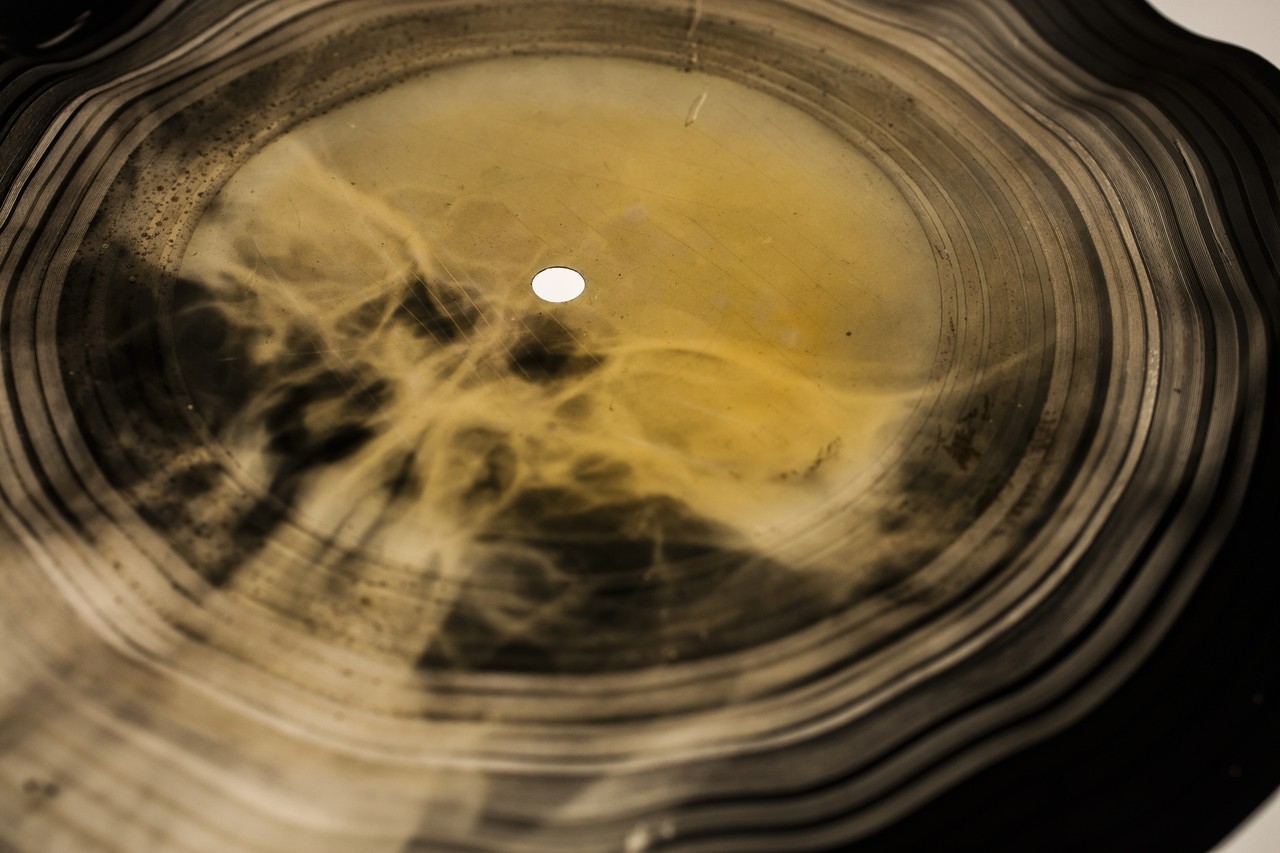 Bone Music is an exhibition examining a unique episode in postwar Soviet history. From the late 1940s to the early 1960s, inventive Soviet music lovers made illegal copies of banned music on used X-ray film.

Their recordings were not limited to Western jazz and rock-n-roll, but also featured Russian émigré music, as well as popular prison and gypsy songs. Putting their freedom at risk, Soviet bootleggers brought some of the hits of the era to a broader Soviet audience and added an exciting chapter to the history of samizdat. Their craft died out in the mid-1960s with the introduction of reel-to-reel recorders, but left a legacy of sonically and visually unique artifacts.

The exhibition at Garage presents research by the X-Ray Audio project (London). Along with the original recordings on x-ray film, visitors will hear the stories of people who made, distributed and played them. The installation produced for the Moscow exhibition features ephemera of the period immersing the audience in an atmosphere where underground technology, forbidden culture, recycling, Cold War politics, and human ingenuity intersect. It reveals the unintentional beauty of the rare “bone music” disks and accentuates the accidental aesthetics of these artifacts of clandestine production, born out of necessity.
“The project is a labor of love researched over many years, an archive of samizdat creativity, cultural resistance, daring entrepreneurialism. It uses forensic snapshots of physical bodies in order to shed light on a spellbindingly obscure subgenre of discography, and as a portal into a little-known but imaginatively intoxicating chapter in postwar communist history.” (Sukhdev Sandhu, Professor of English, Social and Cultural Analysis, New York University)

“They are images of pain and damage inscribed with the sound of forbidden pleasure; fragile photographs of the interiors of Soviet citizens layered with the ghostly music they secretly loved, they are skin-thin slivers of DIY punk protest; they are ‘Roentgenizdat’. In a culture where the recording industry was completely controlled by the state, music lovers discovered an extraordinary alternative means of reproduction.” (Stephen Coates, curator of Bone Music)

A program of public events will accompany the exhibition:

In the first days of the exhibition the X-Ray Cabaret in Garage Atrium will comprise live performances by very special musical guests, who will cut new recordings on x-ray film using a vintage 1950s recorder in real time and in the presence of the public.

From September 7-10, Garage will organize a roundtable discussion and a short film festival, programmed by the X-Ray Audio project as a celebration of cultural freedom. Musicians, filmmakers, “bone music” contemporaries, and cultural theorists will discuss the phenomenon of “bone music” in the context of musical experiments and cultural censorship, as well as recent examples restrictions on popular music in other countries.

Bone Music is curated by X-Ray Audio (Stephen Coates and Paul Heartfield, London) and produced in Russia in collaboration with Sergey Korsakov and Cardboardia Project. The exhibition at Garage is organized by Ekaterina Lazareva, assistant curator.

The X-Ray Audio project was created in 2012 to research, record, collect, and publish the images, stories, and sounds of the extraordinary Soviet x-ray records and the people who made, played, and traded them. It published the book X-Ray Audio. The Strange story of Soviet Music on the Bone in 2015 and a documentary film, X-Ray Audio: The Documentary, and has organized a number of exhibitions and public events on the subject. For more information: www.x-rayaudio.com

Stephen Coates
Stephen Coates is a composer and music producer. A graduate of the Royal College of Art, he is particularly interested in the interaction between music and culture. In 2010, Stephen wrote and presented an eight-part radio documentary series for Resonance FM (London), "Sounds of propaganda and the Cold War," investigating the way music and audio was used for political purposes in the West and in the Soviet bloc. He came across the subject of the x-ray recordings when travelling to Russia to perform over the last six years.

Paul Heartfield
Paul Heartfield is one of London's most experienced and respected portraitists. He has worked extensively in the music industry, photographing many international bands and musicians over the last decade. He is the regular portrait and archive photographer for the Houses of Commons and Lords in Westminster and has photographed most of the senior British politicians of the last few years.
www.garagemca.org