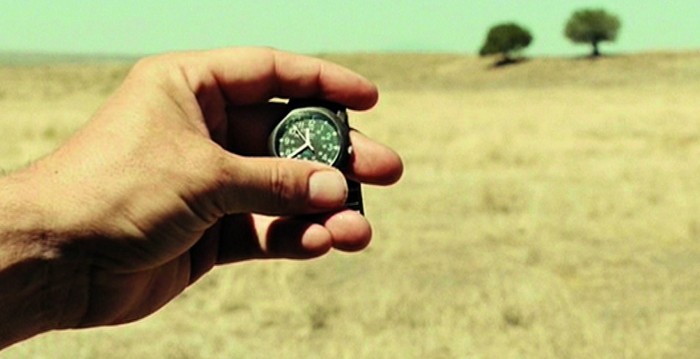 The Clock has been constructed from thousands of clips extracted from different films where time is expressed including clocks, wrist watches, buzzing alarms and cuckoo clocks. The artist has excerpted each of these moments from their original contexts and edited them together to form a 24 hour montage, which unfolds in real time.

The Clock will function as a working timepiece synchronized to local Moscow time, yet the viewer will experience a vast range of narratives, settings and moods with each passing minute of actual time. Whilst constructed to play in real time, the multitude of different narrative directions from different films including the suspenseful, the tragic and the romantic, result in a compelling and relentless work which plays with the way the viewer experiences the cinema. Through The Clock, the artist explores the conventions and devices used by filmmakers to create a persuasive illusion of the duration of time in cinema. When watching a film, the viewer is removed from their local time and swept up by the narrative of the fictional reality they are watching. By corresponding to real time, The Clock disrupts this fiction and the viewer experiences a peculiar awareness of the countless narratives of cinema from the last 100 years.

Using collage in this way has been a recurring theme within Christian Marclay’s work since the late 1970s when he was pioneering mixing sounds and records, through to his most recent work Manga Scroll which features hundreds of onomatopoeic words from Manga cartoons.

Over the past 30 years, Christian Marclay has explored the fusion of fine art and audio cultures, transforming sounds and music into a visible, physical form through performance, collage, sculpture, installation, photography and video.