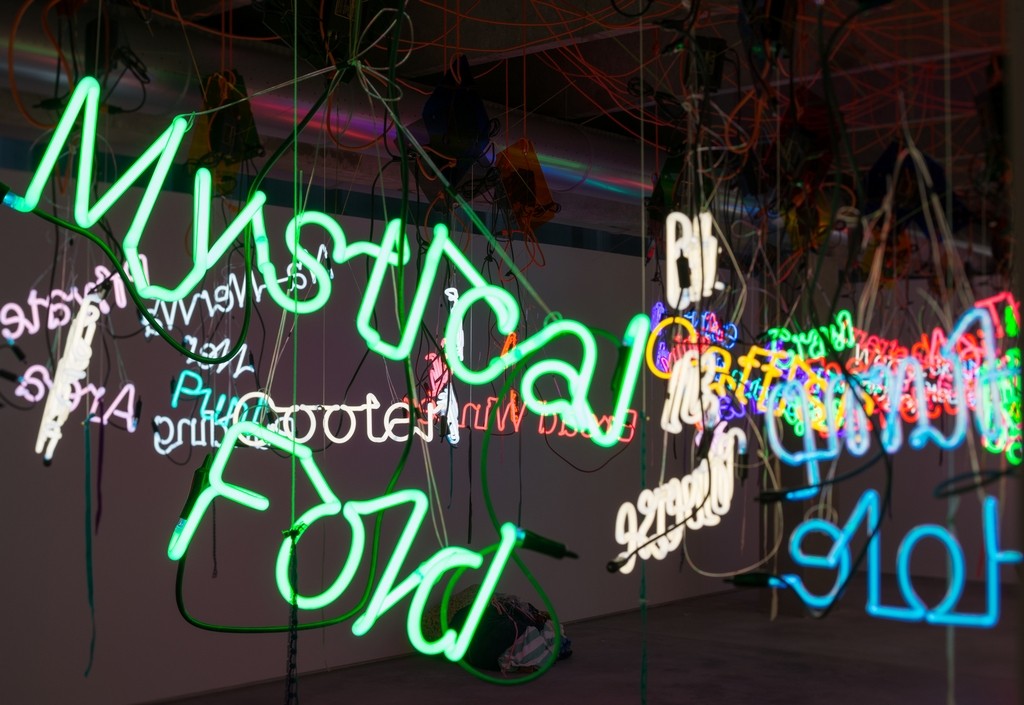 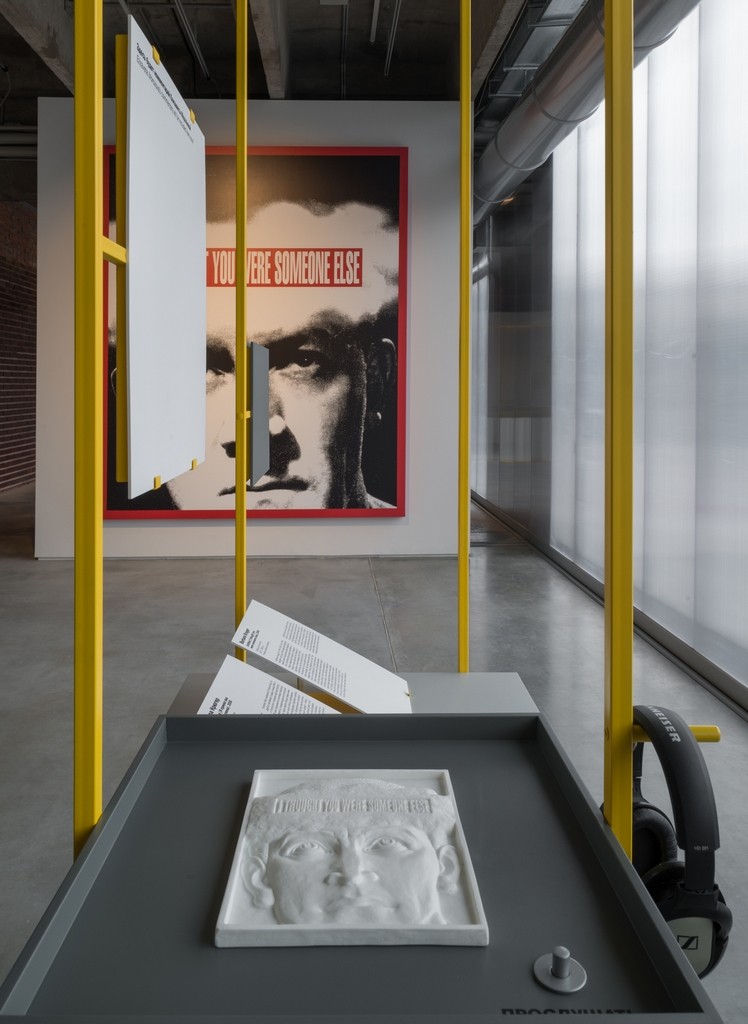 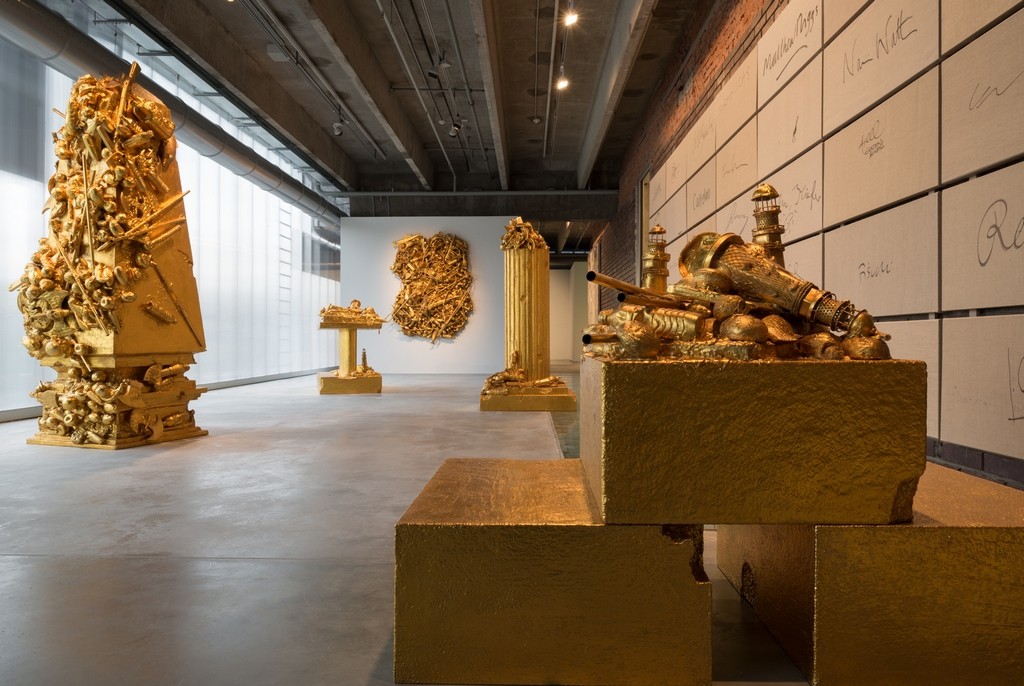 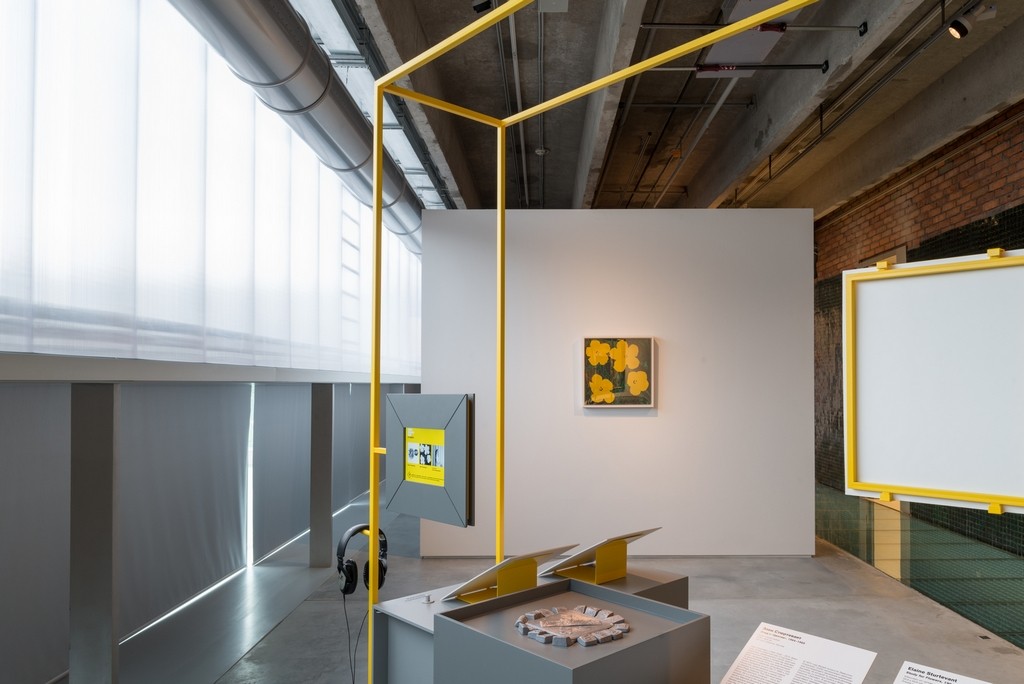 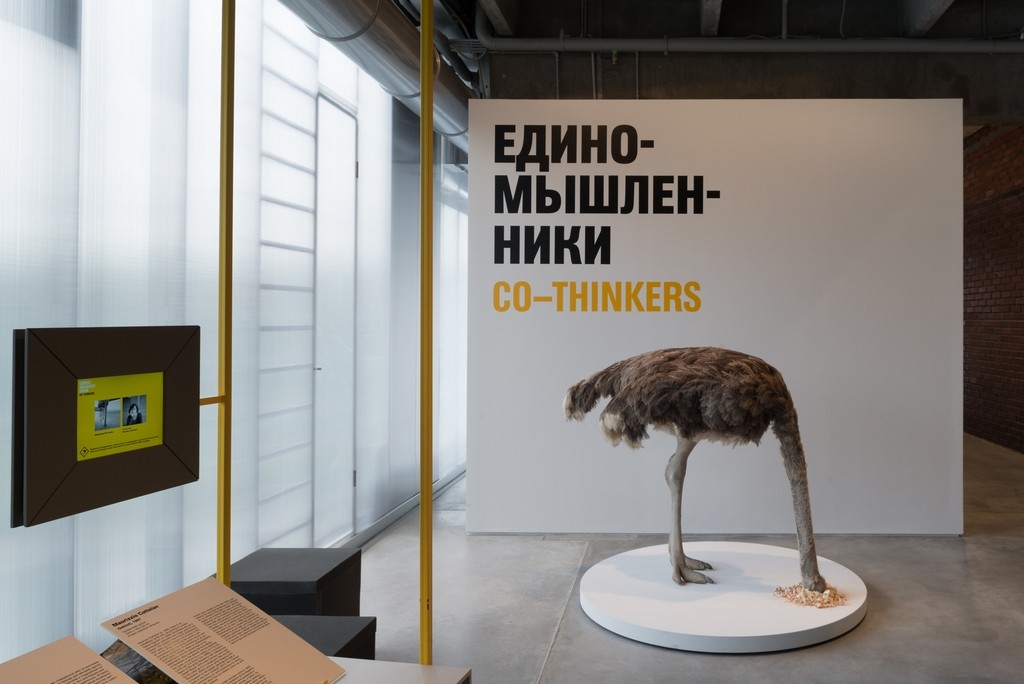 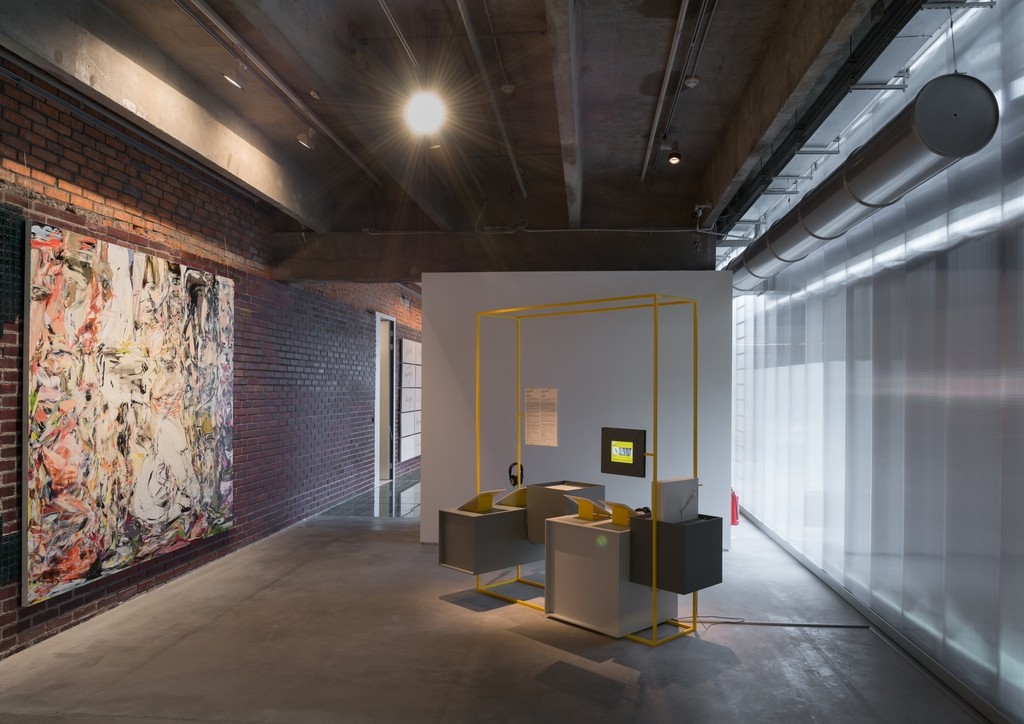 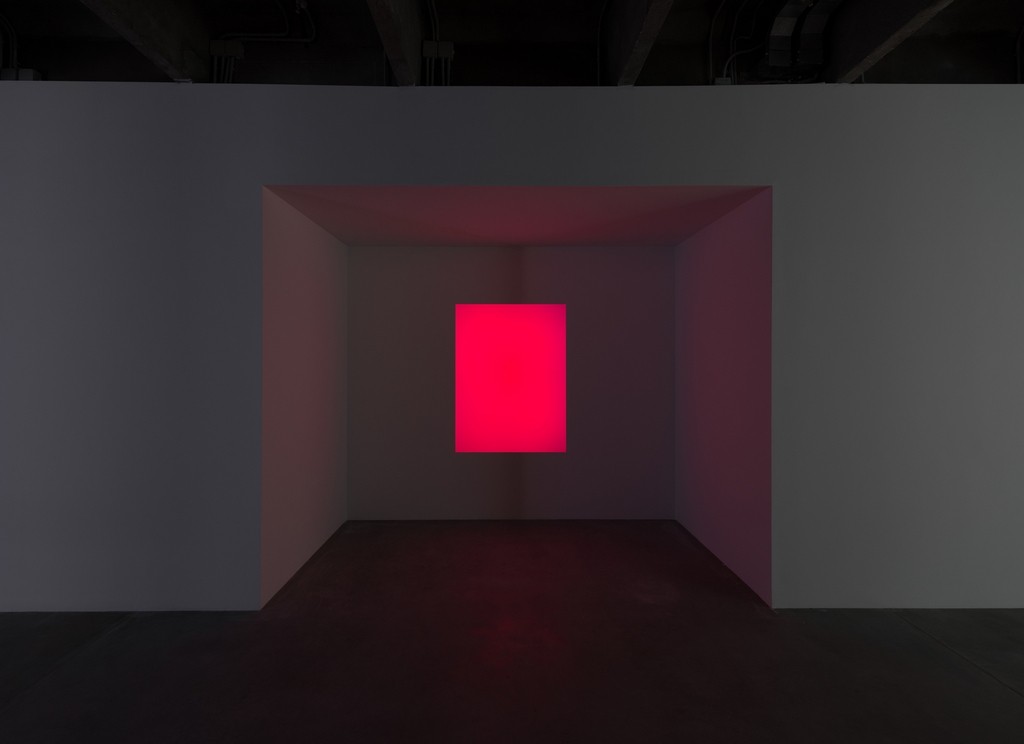 Co–thinkers is the first in a series of projects at Garage Museum of Contemporary Art that seeks to expand the notion of inclusion in an art institution.

The exhibition aims to move beyond the definition of “inclusion” as making the Museum physically accessible to wider audiences, to explore how a team—which includes differently abled people—can make an exhibition for everyone. Four collaborators with varying disabilities—Elena Fedoseeva, Evgeny Lyapin, Elizaveta Morozova, and Polina Sineva—joined a group of Garage curators to make the final selection of artworks—which are on loan from Moscow-based private collections—and develop the architecture and mediation of the show.

Intended as a sensory experience for all audiences, Co–thinkers includes interactive stations that combine a range of tools for perceiving art, including touch and sound. Throughout the show, there is also a large public program of tours, talks, and workshops in the gallery spaces, using new formats that have been conceived specifically for this project.

Following the success of the 2015 Garage Mediators Program, which trained members of the public to become guides and interlocutors for visitors to the newly–opened building, Co-thinkers is the focus for the second iteration of this initiative. In response to a general lack of support for and engagement with people with Asperger syndrome and high-functioning autism in museums, the 2016 Mediators Program comprised a two–month training program devised by one of the co–thinkers, Elizaveta Morozova, to enable Garage volunteers to interact more closely with groups visiting the exhibition.

Garage Director Anton Belov commented: “Co–thinkers is the latest in a series of initiatives aimed at making Garage a place accessible to everyone, not just on a physical level, but also in terms of working with the broadest possible range of collaborators and audiences. So we hope that the methods of this project will enable us to build approaches that involve communities who usually don’t feel a contemporary art museum welcomes them.”

“I would like that the regular museum visitor—who very often think an art museum is an ivory tower—could find a personal connection to an exhibition and see how it is interrelated to the social environment around them. Delving into the process of display creation leads to a drastic change of your opinion and I hope that after this project very different audiences, not necessarily with disabilities, can find ways to understand the message the museum shares“ – says one of the co-thinkers, Elizaveta Morozova.

The project and its public program will result in a critical analysis by invited specialists and the collaborators, so the co-thinkers working methods could be extrapolated onto the cooperation with other communities.

Evgeny Lyapin (b. 1995, Moscow) and was quick to speak (and sing!). At age 5 he felt a strong connection to God, then spent his childhood participating in competitions and festivals and missed a lot of school classes. He featured in renowned documentalist Tofik Shakverdiyev's film About Love. He traveled across half of Russia with the UNESCO World Children’s Choir, and also won the Moscow children’s wheelchair dancing championship. Other accomplishments include: presenting a report on inclusive education to Russia’s Federation Council; watching Yuri Butusov’s almost five-hour-long production of The Seagull eight times; and working as a presenter on the Inva Media TV channel. Lyapin is also a winner of the Russian Presidential Prize for Talented Youth and the TV project President 2042 on the Dozhd news channel. Argued on sex with the head of the State Committee on Family, Women and Children Elena Mizulina, bought in Crimea a T-shirt with Putin’s portrait, and has entered this year the actors’ school at MKHAT Theater and adores his girlfriend Liza Larina.

Elizaveta Morozova from 2000 to 2011 worked actively in the fight against HIV/AIDS, and for reproductive health and women's rights. She was also a hotline consultant for many years. Morozova is co-author of a number of books about HIV/AIDS. During the last four years she has been working as a tutor preparing children with autism to attend school. She created the website About Autism, and maintains the website of the Vykhod Foundation. She co-authored the book Resursny klass (Resource Room) on organizing activities for children with autism in secondary school. Morozova regularly conducts seminars for parents of children with autism, and has Asperger syndrome herself.

Polina Sineva (b. 1982, Moscow) graduated in deaf education and psychology from Moscow State Pedagogical Institute, and in screenwriting from the Gerasimov Institute of Cinematography. She contributes to the publications Mir Glukhikh (The World of the Deaf) and V edinom stroyu (In Unison). She is a certified sign language instructor. Currently, Sineva works as a freelance screenwriter. Among films based on her scenario: Pig in a Poke (Dir. A.Znamensky, 2010); The Deaf: Per Aspera ad Astra (Dir. P. Rodionov, 2013); Entryphone (Dir.M.Belousov, 2015). She was once a professional table tennis player and loves graphic novels. Sineva has been deaf since childhood.

Elena Fedoseeva (b. 1985, Moscow) started attending at a special school for blind and visually impaired children at age 13. She later took a post-graduate course in Russian Literature while simultaneously attending medical college, where she specialized in medical massage. Fedoseeva works in a children's municipal hospital as a massage nurse, and teaches a course on socio-cultural rehabilitation for the deaf-blind. For over a decade she has contributed to the journal Nasha Zhizn (Our Life), published by the All-Russia Association for the Blind. Fedoseeva devotes her spare time to track and field athletics, English, and music theory and practice.
www.garagemca.org