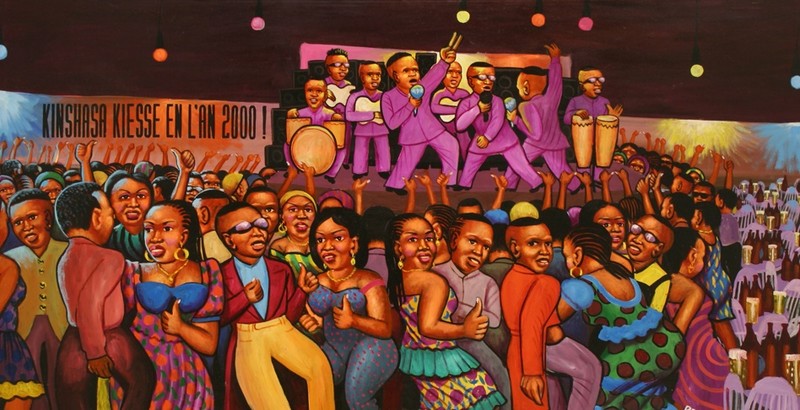 Artist Carsten Höller’s double-take on Jean Pigozzi’s collection of Japanese and Congolese art, juxtaposed to form JapanCongo, will be presented at Garage Center for Contemporary Culture this summer.

The exhibition’s design and installation by Höller positions Japan on one side and Congo on the other in the form of a corridor, highlighting the similarities and differences between the two groups of work. At the narrowest point, the visitor becomes the missing link between the two walls, and the cultural personalities of Japan and Congo draw closer and yet enhance the precision and complexity of Japan versus the art brut style of the Congo.

This architecture of duality generates a coexistence of two cultural identities that is central to Höller’s work. Symmetry and reduplication, lead to the visitors to walk through the central space with pictures and small chambers on either side. However, they can also choose the reverse option, the exhibition’s negative double, and follow a route behind the walls that have been left untreated and visibly makeshift.

JapanCongo has evolved from Höller’s continued exploration of the concept of duality. He divides and re-divides spaces and objects, such as The Giant Triple Mushrooms exhibited at Garage last year. Recently however, his interest in division has been engaged in the explorations of the theme of cultural specificity. In association with Fondazione Prada, he opened The Double Club in London (2008-2009) - the famous bar, restaurant and discotheque, where visitors’ experience of the interiors, music and dining were divided completely into ‘Congolese’ and ‘Western’ parts.

Carsten Höller (b. Brussels, 1961) is a German artist working and living in Stockholm, Sweden. Höller's artistic practice focuses on personal experience, and often involves viewer participation. His intention is to produce a specific, individual or social experience that occurs the moment one comes into contact with the artwork.

His works have been shown internationally over the last two decades, including solo exhibitions at Fondazione Prada, Milan (2000), the ICA Boston (2003), Musée d'Art Contemporain, Marseille (2004), MASS MoCA, (2006), and Kunsthaus Bregenz, Austria (2008). In 2006, he conceived the giant slide installation Test Site at the Turbine Hall in London’s Tate Modern, and represented Sweden (with Miriam Bäckström) at the 51st Biennale di Venezia. Recently he opened the Congolese and Western restaurant, nightclub, disco The Double Club in London in collaboration with Fondazione Prada for a six-month period.

Jean Pigozzi (born 1952) is an Italian businessman, art collector and photographer. He lives between Geneva, New York and Panama. Over the last twenty years, Pigozzi has put together the world’s largest collection of contemporary African art (www.caacart.com). The collection is based in Geneva and has been presented in major museums around the world. For the last three years, he has also been collecting contemporary Japanese art by young Japanese artists (www.japigozzicollection.com).

Jean Pigozzi started taking pictures at age 7. Since then, he never stopped photographing everything around him, which meant friends, dogs, icebergs, himself and a great many celebrities. His photographs have been shown at the Modern Art Museum in Paris, the Light Gallery in New York, the Helmut Newton Foundation in Berlin, the Rencontres de la Photographie in Arles and recently at Gagosian Gallery in New York. His latest book: Catalogue Deraisonne (Steidl-Dangin) was published in October 2010.

Frustrated that he could not find clothing that matched his colorful and casual aesthetics, Jean Pigozzi created LimoLand, a menʼs clothing and accessories line, in 2007. As founder and creative director, Jean is the heart and soul of the brand, which represents the culmination of his many years collecting, working with colors and prints and traveling the world. It now has its own LimoLand store in New York. The brand has been featured in such influential fashion magazines as Vogue, GQ, Vanity Fair, T: The New York Times Magazine and The International Herald Tribune ( www.alimoland.com). In 1996, Jean started buying land in Panama, on the pacific coast, and created the Liquid Jungle lab that is dedicated to research in marine biology and brings high technology to environmental conservation. Scientists and students from around the world use the marine lab facilities and experimental farm to conduct their research.
www.garagemca.org