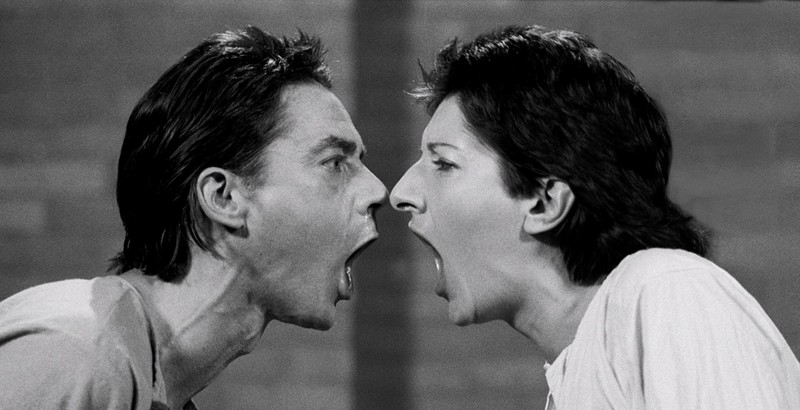 Internationally recognized as a pioneer of performance art, Abramović has been testing the boundaries of performance for over 30 years, presenting work that physically and mentally challenges the performer and the viewer. Since the beginning of Abramović’s career in Belgrade during the early 1970s, the body has been both her subject and medium. Exploring the limits of her being, she has withstood pain, exhaustion and danger in the quest for emotional and spiritual transformation. This retrospective will introduce Abramović, widely acclaimed for the importance of her contribution to the history of performance art, to a Russian audience. In so doing, it follows in the footsteps of worldwide exhibitions of Abramović’s oeuvre such as Balkan Baroque, presented at the 1997 Venice Biennale, Seven Easy Pieces at the Solomon R. Guggenheim Museum, New York (2005), and in Marina Abramović: The Artist Is Present at The Museum of Modern Art, New York (2010).

Intending to transmit the presence of the artist and make her historical performances accessible to a larger audience, the exhibition will present five landmark Abramović pieces performed by live ‘reperformers’, alongside video and photographic documentation, sound recordings and objects used in the original performances, incorporated within a chronological presentation of the artist’s career.

In addition, Abramović will present a new performance installation entitled Measuring the Magic of Mutual Gaze, which has been created as the result of a close collaboration between the artist and a team of American and Russian scientists. Garage visitors are invited to participate in an experiment that measures brain activity when seated opposite one another – an exercise that privileges emotional, over physical, interaction. The viewing public can observe this activity, to see which areas of the brain are physically stimulated when participants are engaged with each other in thought. The work is reminiscent of Abramović's The Artist is Present, performed at MoMA New York, as different visitors sat opposite the artist over a number of months.

Abramović will be holding a special training workshop for the participating reperformers from 2 to 6 October 2011. Visitors are invited to come and observe the process at Garage, as the artist will work with the Russian reperformers in a uniquely devised program of exercises to prepare them for the endurance required for the exhibition ahead.

Imponderabilia, Relation in Time and Point of Contact were originally created and performed by Abramović and the artist Ulay (Uwe Laysiepen, German, b. 1943), her partner from 1975 to 1988. The group of performers chosen by Abramović will reperform these pieces continuously in shifts throughout public hours.

The first section focuses on solo performances created when she was based in Belgrade (1969–75). For the performance Rhythm 0 (1974), Abramović placed on a table 72 objects that people were allowed to use in any way that they chose. Among these objects were scissors, a knife, a whip, a gun and a single bullet. For six hours, the artist allowed audience members to manipulate her body and actions. By the end of the performance, she had been cut, painted, cleaned, decorated, crowned with thorns and had the loaded gun pressed against her head. A table with examples of these objects, as well as a 35mm slide projection showing photographs of the original performance, is included within the exhibition.

The next section features her collaborations with Ulay. Works include Rest Energy (1980), in which Ulay held a bow taut with its arrow pointed directly at Abramović’s heart and Nightsea Crossing (1981–87), a series of 22 performances that featured Abramović and Ulay sitting motionless at either end of a rectangular table facing each other, completely silent.

The third section focuses on the years 1995 to 2005, when Abramović embarked on a new chapter of solo works about being alone and about dealing with her cultural, ideological and spiritual origins in the Balkans, her family background and feelings of shame and suffering amidst the atrocities that affected her home country in the 1990s. The installation Balkan Baroque (1997), for which she won the Golden Lion for Best Artist at the 1997 Venice Biennale, consists of a three-channel projection portraying life-size images of her mother, herself and her father, 6,000 lbs. of cow bones and copper vessels filled with black water. The original presentation featured a performance by Abramović, who sat for six hours a day for four days and scrubbed the remaining meat off of the bones, evoking the pain and suffering of war.

The final section consists of works from her recent career based in New York, where she has been based since 2001. In The House with the Ocean View (2002), the artist lived in the Sean Kelly Gallery in New York for 12 days in a cross-sectioned structure of rooms.

The exhibition was originally conceived by The Museum of Modern Art, New York.

Marina Abramović (born Yugoslavia, 1946) began experimenting with interventions in sounds and space and composing instructions for imagined performances in the late 1960s. In the 1970s, she introduced her own body as object, subject and medium of her work, starting with a series of durational performances antithetical to the political climate of socialist Yugoslavia. When she was twenty-nine, Abramović left Belgrade unannounced for Amsterdam, where she met Ulay, with whom she collaborated for the next twelve years. In 1988, they ended their collaboration in a final performance, walking from opposite ends of the Great Wall of China to meet in the middle and separate. In the 1990s, coinciding with conflicts in the Balkan region, Abramović produced a chapter of solo work examining her personal cultural and national heritage. Since moving to New York in 2001, she has been investigating reperformance as a means of exhibiting and preserving performance art and has reperformed her own works and those of others. These ideas are explored in The Artist is Present.

Abramović has presented her work with performances, sound, photography, video, sculpture and ‘Transitory Objects for Human and Non Human Use’ in solo exhibitions at major institutions in the United States and Europe, including the Stedelijk Van Abbemuseum, Eindhoven, The Netherlands (1985); Musée National d’Art Moderne, Centre George Pompidou, Paris (1990); Neue National Galerie, Berlin (1993) and the Museum of Modern Art, Oxford (1995). In 1995, Abramović’s exhibition Objects Performance Video Sound travelled to the Museum of Modern Art, Oxford, the Irish Museum of Modern Art, Dublin and the Fruitmarket Gallery, Edinburgh. In 1998, the exhibition Artist Body - Public Body toured extensively, including stops at Kunstmuseum and Grosse Halle, Bern and La Gallera, Valencia. In 2000, a large solo show was held at the Kunstverein in Hannover. In 2004, Abramović also exhibited at the Whitney Biennial in New York and had a significant solo show, The Star, at the Maruame Museum of Contemporary Art and the Kumamoto Museum of Contemporary Art, Japan. In 2005, Abramović presented Balkan Erotic Epic at the Pirelli Foundation in Milan, Italy and at Sean Kelly Gallery, New York. That same year, she held a series of performances called Seven Easy Pieces at the Guggenheim Museum in New York, which were awarded the prize for 2005-2006 Best Exhibition of Time-Based Art by the United States Art Critics Association. In 2011, she participated in an opera based on her life, The Life and Death of Marina Abramović, directed by Robert Wilson and starring Willem Dafoe, commissioned for the Manchester International Festival.

Among the recent exhibitions Biesenbach has organized internationally are Ryan Trecartin: Any ever and Francis Alys: A Story of Deception, Laurel Nakadate, 2011; Performance 1: Tehching Hsieh (2009); Pipilotti Rist: Pour Your Body Out (7354 Cubic Meters) (2008); Doug Aitken: Sleepwalkers (2007, co-commissioned with Creative Time); Regarding Terror: The Red Army Faction Exhibition (Berlin and Graz, 2005); The Shanghai Biennale (2002); Venice Biennale (1995); Hybrid Workspace at Documenta X Kassel, (1997) and 37 Rooms Berlin, (1992). In 2010, Biesenbach curated Marina Abramović: The Artist is Present at The Museum of Modern Art, New York and brought his exhibition 100 Years of Performance to Garage.

Biesenbach founded Kunst-Werke (KW) Institute for Contemporary Art in Berlin in 1991; as well as the Berlin Biennale in 1996, and he remains Founding Director of both entities.
www.garagemca.org