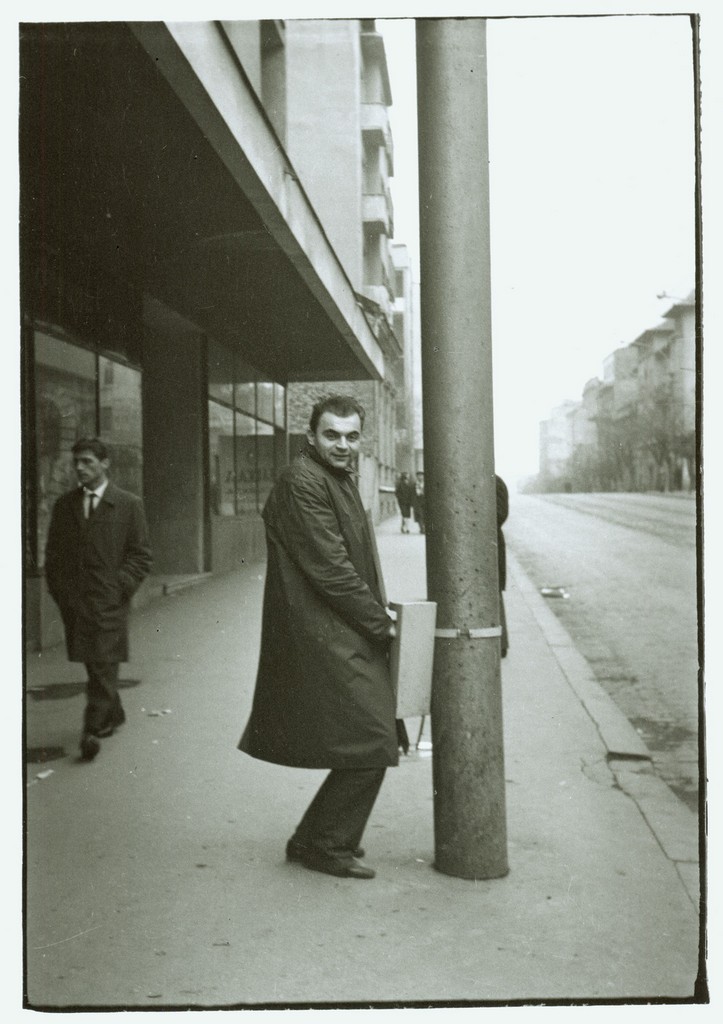 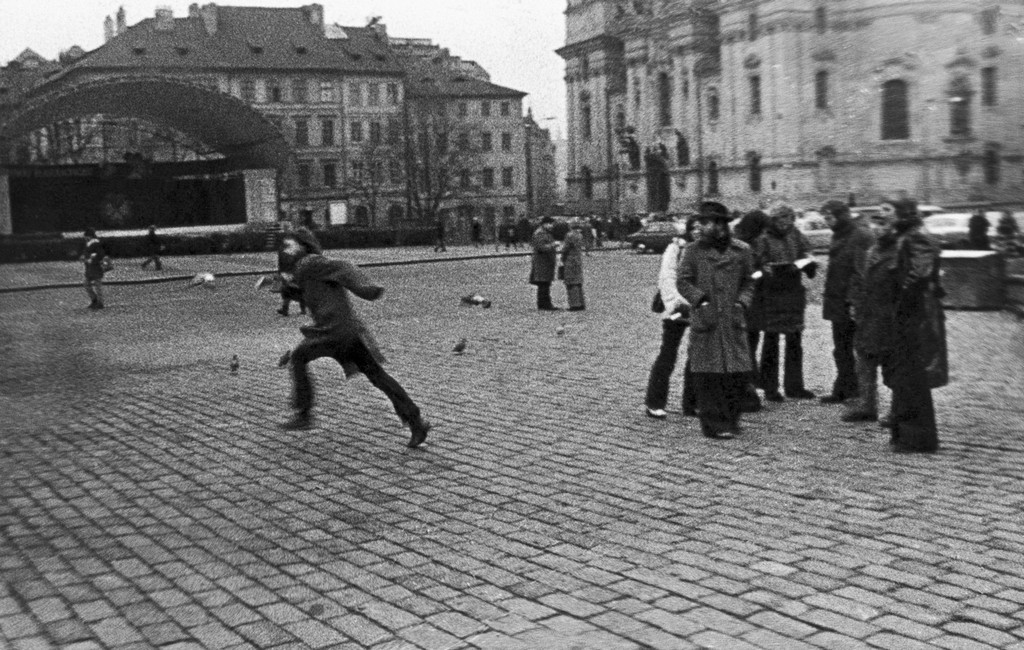 Jiří Kovanda
January 23rd, 1978, Prague
I had a date with several of my friends...we were standing in the square talking... suddenly, I started to run... I was running over the square and got lost in one of the streets...
b/w photograph
Credits: gb agency, Paris and Krobath, Wien/Berlin 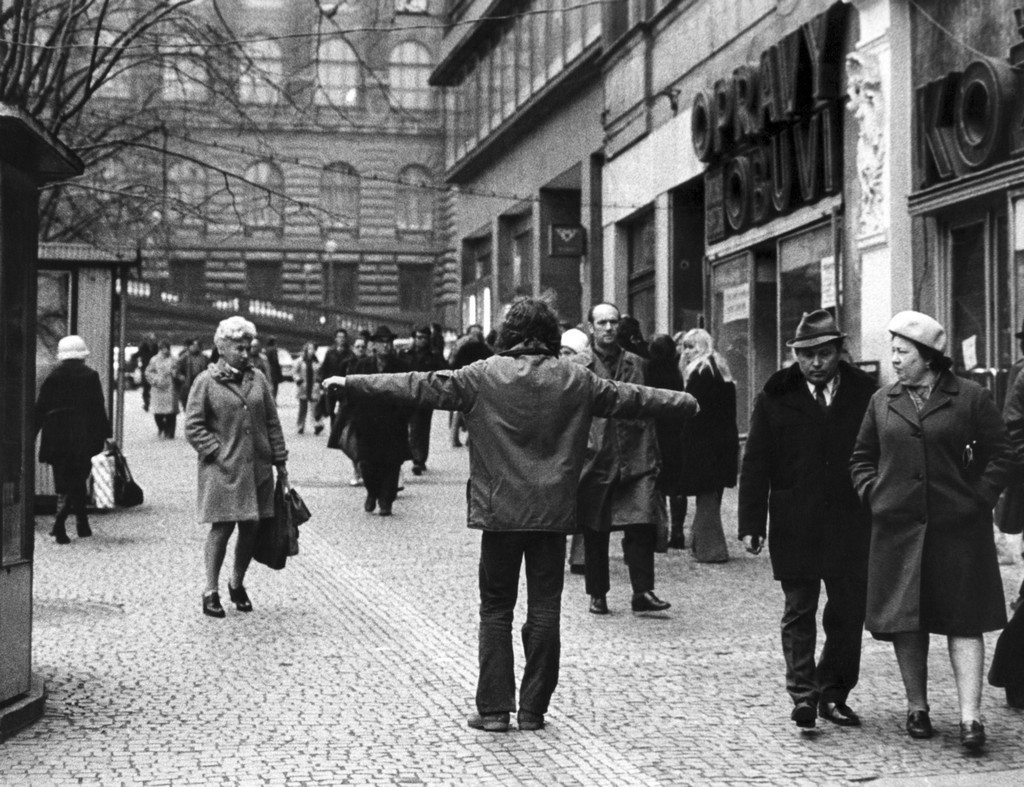 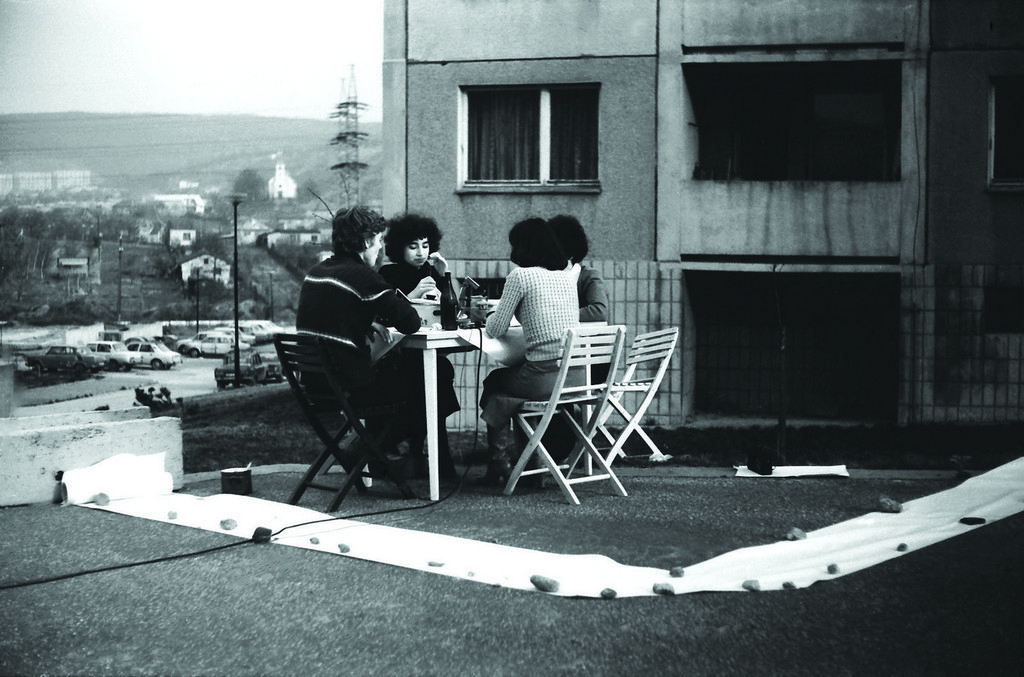 Garage Project Space concludes its program for 2014 with Personal (Hi-)stories, which focuses on lesser-known art from the period of 1960s-80s in Eastern Europe, including twelve artists from the Czech Republic, Croatia, Hungary, Poland, Slovakia and Serbia. The exhibition is the winning proposal selected by an international jury from the first Garage Open Call for exhibitions by emerging Russian curators.

Personal (Hi-)stories, brings together photo and video documentation of artistic actions, performances, and films realized in the public realm, exploring the boundaries between personal and public space. While it is evident that the issue of public and private can never be entirely isolated from the idiosyncratic political contexts of each country at that time, it is also true that, despite their differences, all these countries shared a common ideology based on socialist ideals.

The artists in this exhibition—representatives of the so-called “unofficial” art of that period—opposed this ideology and aimed to distance themselves from the politics of their respective countries, which they perceived as symptomatic of an outdated set of ideals long out of touch with reality. At the same time, they avoided any interpretation of their art as political gesture and insulated themselves from imposed social and political rules. As a result, while the public arena was a site for manifestation and affirmation of their artistic freedom, private space became an important site of resistance in their search for new artistic language and social relationships.

Within the exhibition a lecture by Mira Keratova The Performance of Living will take place.

Ján Budaj (b. 1952, Bratislava, Czechoslovakia) began his artistic activities in the late 1970s during the so-called period of “normalization.” He was a member of the art group Temporary Society of Intense Experience, which worked in Bratislava’s public space, incorporating elements of improvised theatre and sociology. He took an active part in the opposition movement Public Against Violence and the Velvet Revolution of 1989, leaving art and devoting himself to politics. Budaj is currently leader of the Slovakian party Change From Below – Democratic Union, and vice-mayor of Bratislava.

From the early 1960s, Tomislav Gotovac (b. 1937, Sombor, former Yugoslavia; d. 2010, Zagreb, Croatia) worked at the intersection of experimental cinema, body art, and conceptualism, producing a range of performances, films, collages, and photographs. He changed his name to Antonio Lauer in 2005. In 2007, he received the Croatian Association of Visual Artists' Lifetime Achievement Award, and in 2011 he represented Croatia at the 54th Venice Biennial.

Milan Knížák was born in 1940 in Plzen, Czechoslovakia. Throughout the 1960s, he performed street actions for random audiences, published “unofficial” magazines, and was a member of the group Actual Art and the Fluxus movement. In 1965, he was appointed head of Fluxus-East by the movement’s founder George Maciunas. In the late 1960s he traveled across Europe and the USA, participating in a number of Fluxus events, after which he returned to Czechoslovakia. He has lectured at the Prague Academy of Fine Arts since the 1990s, and worked as director of the State Gallery in Prague from 1999 to 2011.

Jiří Kovanda’s (b. 1953 in Prague, Czechoslovakia) early career involved conceptual actions consisting of barely perceptible incursions into the everyday life of mid-1970s Prague. In the 1980s he turned to painting, and in the 2000s, following a short break, he returned to this medium as well as 1970s-style conceptual performances.

Alex Mlynárčik’s (b. 1934, Žilina, Czechoslovakia) artistic career began with wood compositions in the early 1960s. Upon visiting Paris in 1964, he was heavily influenced by the French New Realist movement, and began to create prominent happenings and actions involving random passersby. In the 1960s, he performed a series of actions titled Happsoc (derived from the words “happening” and “social”) along with artist Stano Filko and thinker Zita Kostrova.

Jan Mlčoch was born in 1953 in Prague, Czechoslovakia. His performances and actions, which would normally take place in apartments or suburbs, witnessed by a small circle of friends, tested the limits of the human body, charted the boundaries of personal space, and altered viewer perception. Throughout the period 1974 to 1980, he conducted around 20 events in close collaboration with artists Karel Miler and Petr Stembera, later abandoning artistic practice to work as curator of the Prague Museum of Decorative Arts’ photography collection.

Neša Paripović was born in 1942 in Belgrade, Yugoslavia. In the 1970s, he belonged to a circle of artists based around the Student Cultural Centre in Belgrade (SCC Gallery). Initially launching his career in the early 1970s as a painter, he began working with photography, film, and video as early as 1973. From 1975 to 1980 he was a member of Group 143, a collective devoted to linguistic and semiotic readings of art.

Ewa Partum was born in 1945 in Grodzisk Mazowiecki, Poland. She began her artistic career as a student at the Warsaw Academy of Arts in 1965 and belongs to the generation of Polish conceptualists, most notably pioneering feminism in Eastern European art. She has worked in variety of different media, including action, object art, photography, film, performance, visual poetry, and mail art. Partum has lived in Berlin since 1983.

Bálint Szombathy was born in Pacsér, Yugoslavia, in 1950. Since the 1970s, his practices have ranged from visual poetry and land art to performances and conceptual art. Grounded in the public space, his works draw upon political language, analyzing the ways in which it impacts on our everyday lives.

Endre Tot was born in 1937 in Sümeg, Hungaria. He first delved into art informel, moving on to mail art and performance in the early 1970s, genres with which he still works to this day. Around the same time, he declared a “state of zero”– the concept of negation and nothingness – as both a reaction to state censorship in the public space and an acknowledgement of the new “planetary” dimension to his art. He has lived in Cologne since 1980.

Stano Filko (b. 1937, Velka Hrdna, Czechoslovakia) performed a series of conceptual actions titled Happsoc (derived from the words “happiness” and “society”) as part of a group consisting of artist Alex Mlynarcik and thinker Zita Kostrova. Filko’s later practices involve a fully fledged cosmology that, similar to Happsoc, encompasses the entire world in the form of art, covering a range of genres from installations to happenings, objects, and drawings. His works featured at the 1982 Documenta, and at the 2005 Venice Biennale.

Tibor Hajas was born in 1946 in Budapest, and died in 1980 in Szegend, Hungaria. In 1967, following a year-long imprisonment for participating in a political demonstration, he began writing poetry, then, inspired by Fluxus ideas of “anti-art,” turned to actions, performances and objects in 1969, and to film and video art in 1975. After 1978, he engaged in performances in the spirit of the Viennese Actionists, which work with and explore the limits of his own body.
ABOUT THE CURATORS

Elena Yaichnikova (b. 1979, Moscow, Russia) is an independent curator, art historian and critic. She was co-curator of Colocation/Living Together (La Box Gallery, Bourges, France, 2007-2008), as well as curating and co-curating exhibitions such as 40 Lives of One Space (Special Project, 3rd Moscow Biennial of Contemporary Art, Red October, Moscow, 2009), RES PUBLICA (Moscow Museum of Modern Art, 2010), Once Upon a Present (SC Gallery, Zagreb, 2011), Generation P (Russenko Festival, Le Kremlin-Bisetre, France, 2012), Double Vision: Contemporary Art from Japan (Moscow Museum of Modern Art, 2012), among others. From 2011 to 2012, she curated the START platform for young art at Winzavod, Moscow. Yaichnikova currently works at MMOMA’s Education Department, and has produced a series of lectures on the history of 20th-century art and another on the history of exhibiting practices. Her written pieces on contemporary art have seen print in Russian and international media alike.

Nicolas Audureau (b. 1977, Paris, France) is an independent curator, art historian, and critic. He was co-curator of Colocation/Living Together (La Box Gallery, Bourges, France, 2007–08), as well as curating and co-curating exhibitions such as French Contemporary Painting: intersections in history (PERMM Museum of contemporary art, Perm, 2012–13), Generation P (Russenko Festival, Le Kremlin-Bisetre, France, 2012), Couch Skepticism (Special Project, 4th Biennial Moscow of Contemporary Art, Art-house Squat Forum, Moscow, 2011), RES PUBLICA (Moscow Museum of Modern Art, 2010), 40 Lives of One Space (Special Project, 3rd Moscow Biennial of Contemporary Art, Red October, Moscow, 2009), among others. He earned a postgraduate degree from the Department of Art History and Criticism at the University of Rennes 2, France, and currently heads the Curatorial Project program implemented by the Higher School of Artistic Practices and Museum Technologies at the Russian State University of Humanities’ Department of Art History in Moscow. His texts on contemporary art have featured in catalogues as well as the magazines Art Press, Critique D’Art, Frieze, Zero Deux, and others.
www.garagemca.org