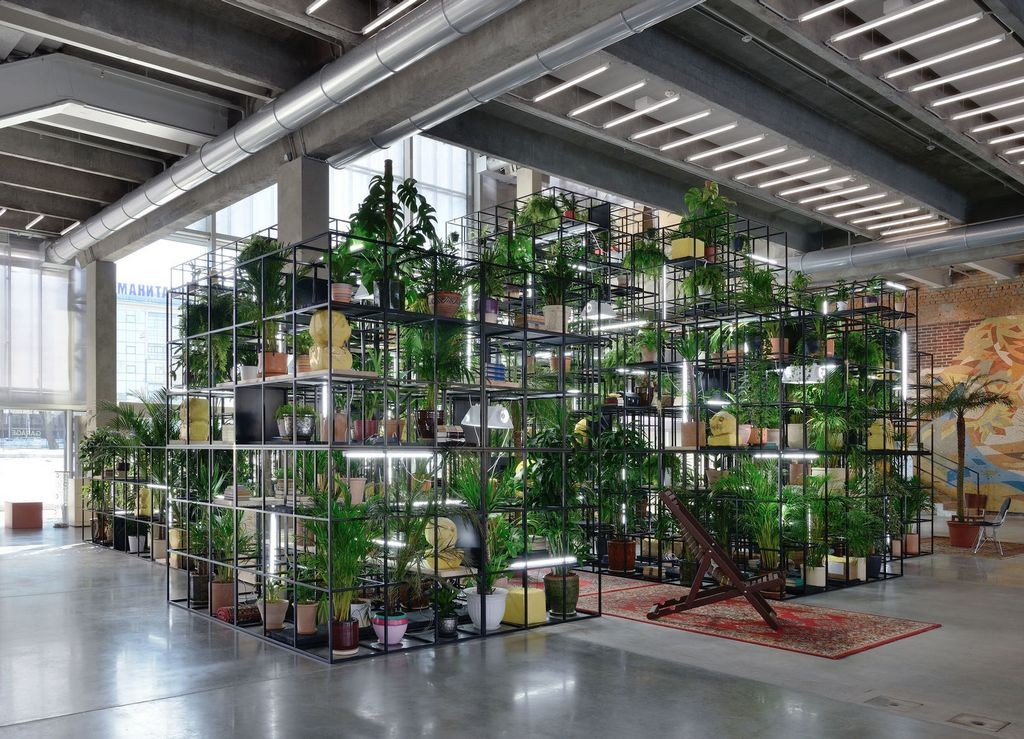 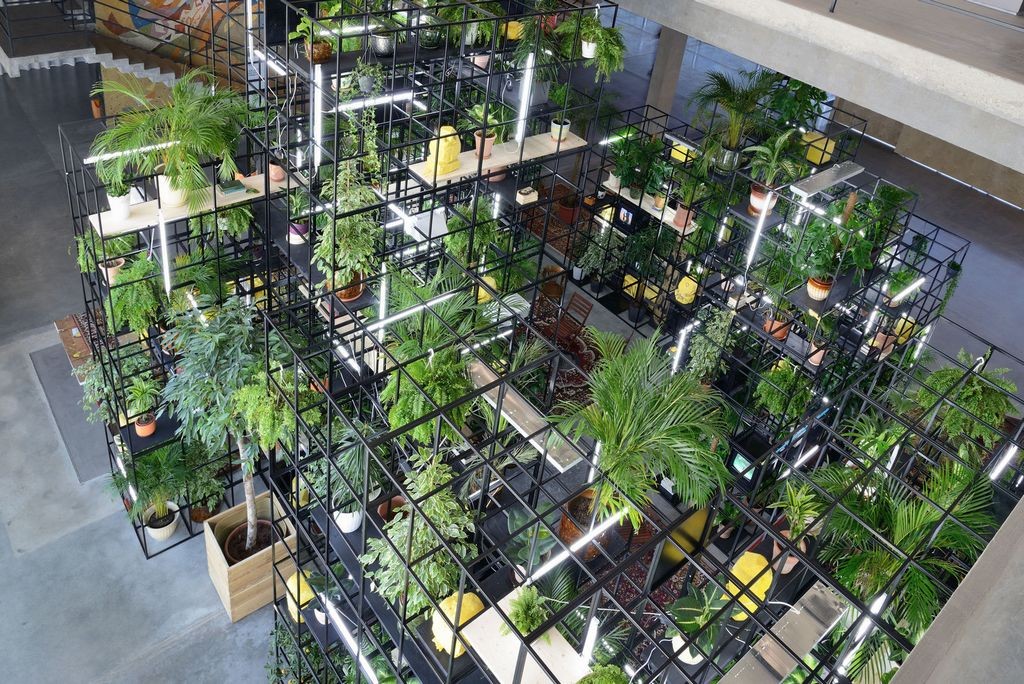 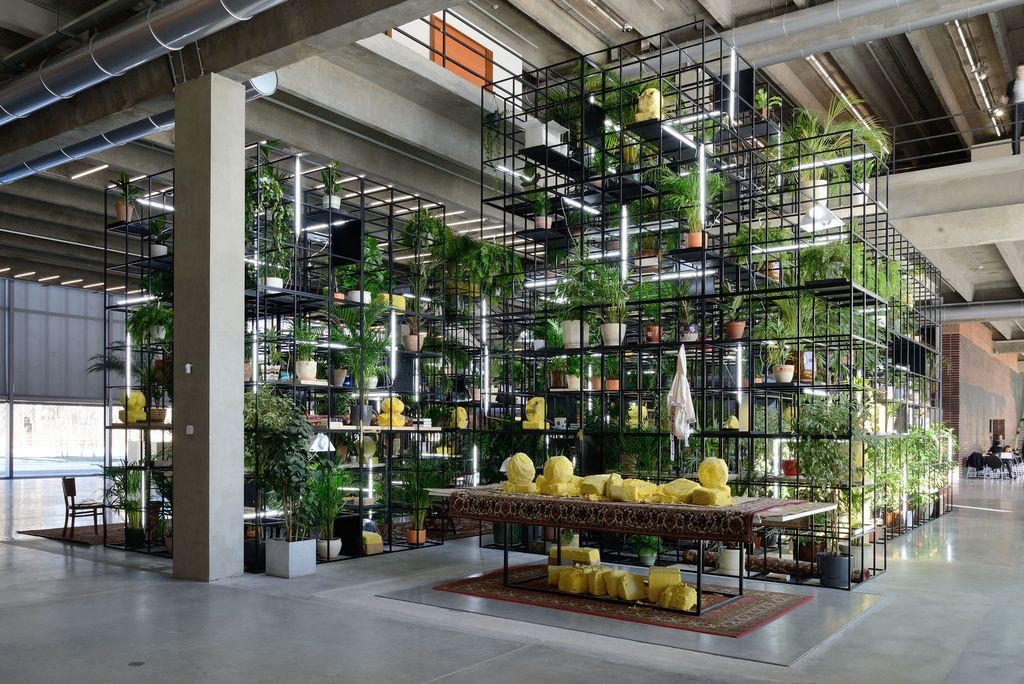 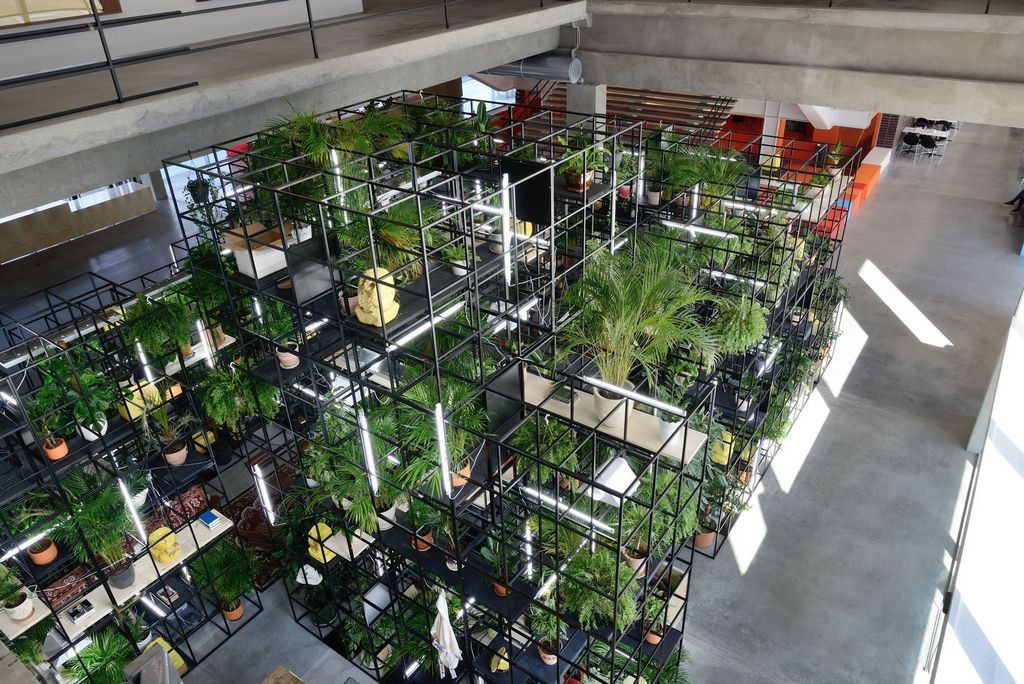 For the second commission in Garage Atrium, New York-based artist Rashid Johnson will produce an installation using a towering grid structure to house a unique, living ecosystem in the Museum that visitors can enter and explore.

Constructed as a maze-like environment for all the senses, Within Our Gates integrates tropical plants such as palms, dracaenas, ficus, and ferns, with sculptural elements, moving image, sound, and everyday objects to immerse the viewer in the artist’s poetic manifestation of a world where fictions and facts, histories and speculations converge. His first project in Russia, this is also the largest work the artist has ever made.

Johnson first visited Moscow in early 2015, when the Museum was under construction. He was visually inspired by the Soviet Modernist architecture—originally built in 1968—in transition. This triggered memories of a visit to Turks and Caicos, where unfinished edifices were overrun by the tropical landscape. Says Johnson: “It was when the place was full of anticipation, but the buildings were never finished and it looked to me like this incredible, deformed dream. There are a lot of different ways to interpret that, but it's the contradictions that I keep thinking about in relation to the new work I’m making for Moscow, which will keep growing and changing over the time it is on show.”

Describing his new work as “a brain,” the artist has drawn on both “high” and popular culture for his source material. For example, influences and objects include artist Sol LeWitt’s three-dimensional minimalist structures from the 1960s; shea butter (a popular hair and skin product from Africa); Russian rugs; the Moscow Botanical Gardens; books by W.E.B Du Bois, James Baldwin, and Frantz Fanon (among other authors); as well as films such as Rocky IV, Woody Allen’s Manhattan, Fellini’s 8 1/2 and Oscar Micheaux’s 1920’s silent film Within Our Gates, which also lends the commission its title. Together these incongruent building blocks give form to a stream of consciousness that offers a different perspective on cultural symbols and artifacts. Transcending worn clichés of class, nation, and race, the sculpture invites viewers to prioritize intuition and affinity as a mode of experience.

The installation of Within Our Gates has started two weeks prior to the launch of the commission and will be publicly visible throughout, enabling visitors to witness the process of creating the work. From the launch onward an 11-hour film screening, curated by Johnson, will be accessible daily inside the installation. A book documenting the process of the commission will be published in English in September 2016.

The project is supported by Hauser & Wirth.

Rashid Johnson (b. 1977) is based in New York. He was born in Chicago to an African History professor and a CB radio enthusiast who owned a small electronics and radio communication company: “I grew up between my father’s laboratory and my mother’s library,” Johnson has remarked. These contrasting views on the world have been an influence ever since.

Earning a BA in photography from Columbia College in Chicago in 2000, and an MFA from the School of the Art Institute of Chicago in 2004, by May 2001 he had made his debut in New York in the seminal group show Freestyle at the Studio Museum in Harlem, curated by Thelma Golden, which introduced the concept of “post-black” through a new generation of artists. But it wasn’t until 2008, three years after he finally moved to New York City, that he received his first solo show at Nicole Klagsbrun Gallery. Since then, Johnson’s star has been on the rise and he has rocketed to prominence, presenting shows at major institutions and galleries in both the US and abroad, including the 2011 Venice Biennale; a survey show at the Museum of Contemporary Art in Chicago (2012) which traveled to the Miami Art Museum; the High Museum, Atlanta; and the Kemper Art Museum, St. Louis; as well as large-scale solo exhibitions at the South London Gallery (2012); Ballroom Marfa, Texas (2013) which traveled to the MCA Denver in 2014; the George Economou Collection in Athens (2014); and most recently at the Drawing Center in New York (2015).

His work can be found in the collections of the Museum of Modern Art, New York; Solomon R. Guggenheim Museum, New York; Whitney Museum of American Art, New York; Museum of Contemporary Art, Chicago; Art Institute of Chicago; High Museum, Atlanta; and the Miami Art Museum; among other institutions.

Garage Atrium Commissions provide opportunities for artists to develop site-specific artworks for the Entrance Hall of the Museum. The first series of its kind in Russia, the commissions respond to the scale of the 9.5-meter (31ft) high, 10-meter (33ft) wide space, which can be viewed from all floors of the building. Presented twice a year, in spring and fall, the series has included new works by Erik Bulatov (June 2015), and an installation by Rashid Johnson (spring 2016). Forthcoming in fall 2016 is a new work developed by Chinese artist Yin Xiuzhen.
www.garagemca.org