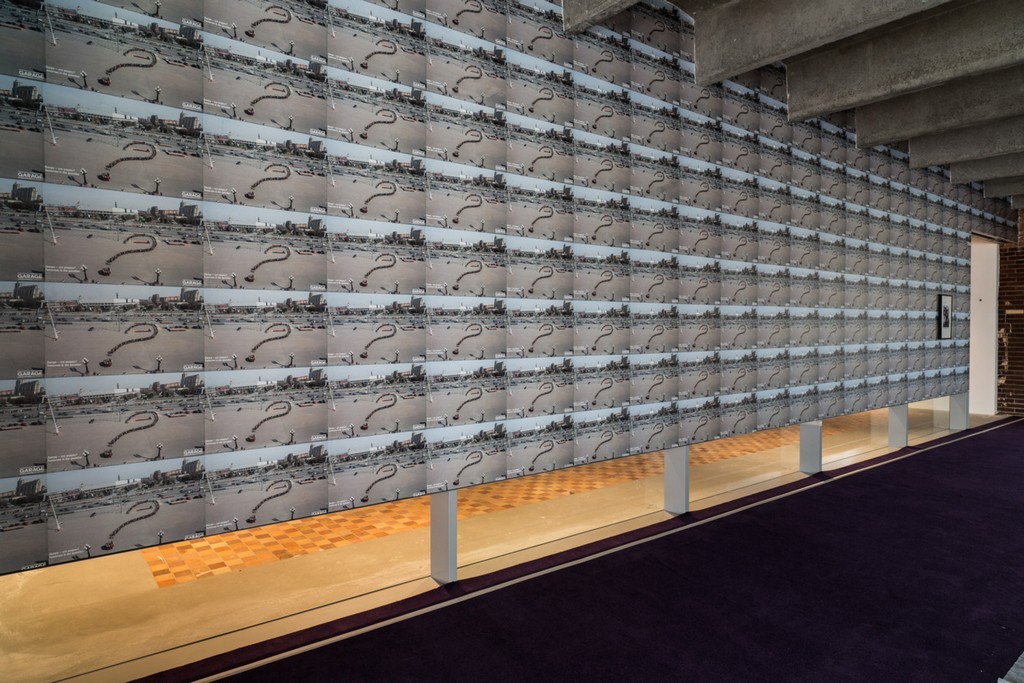 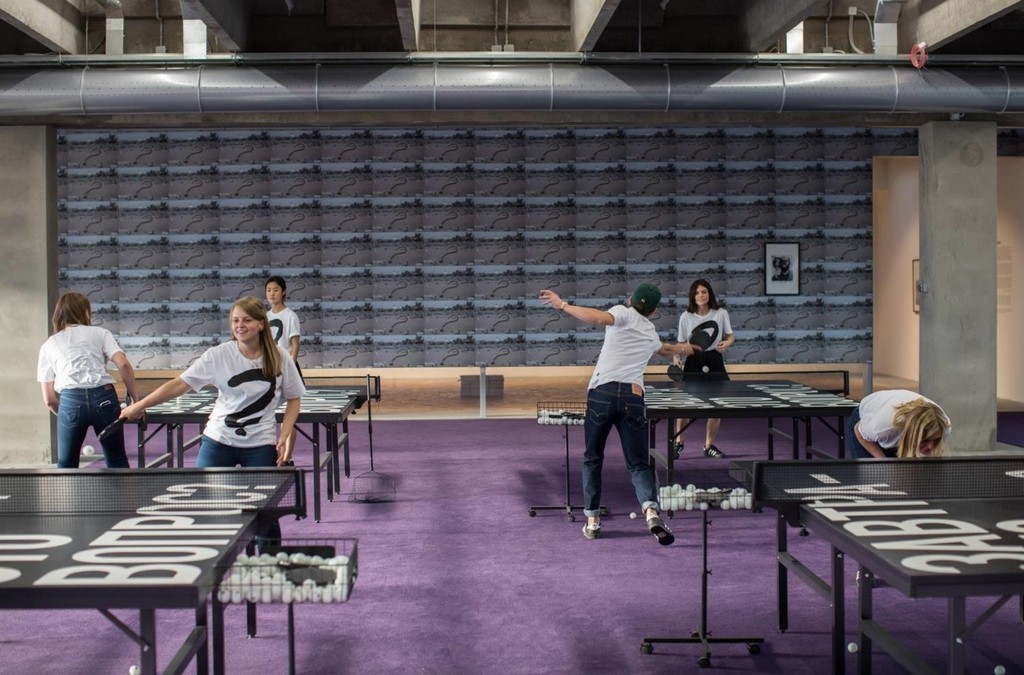 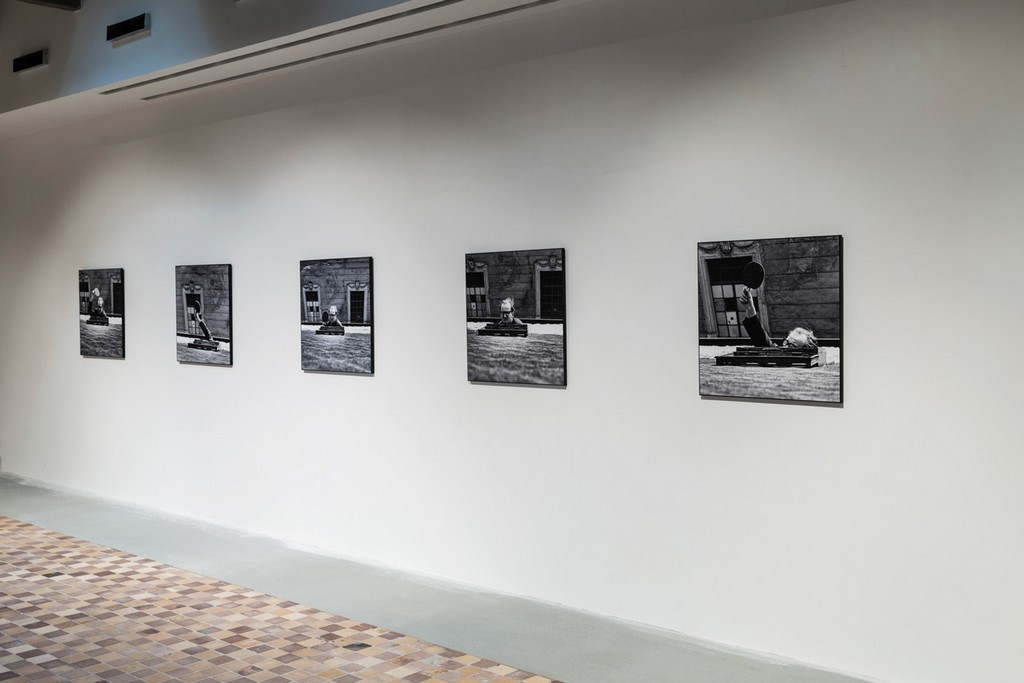 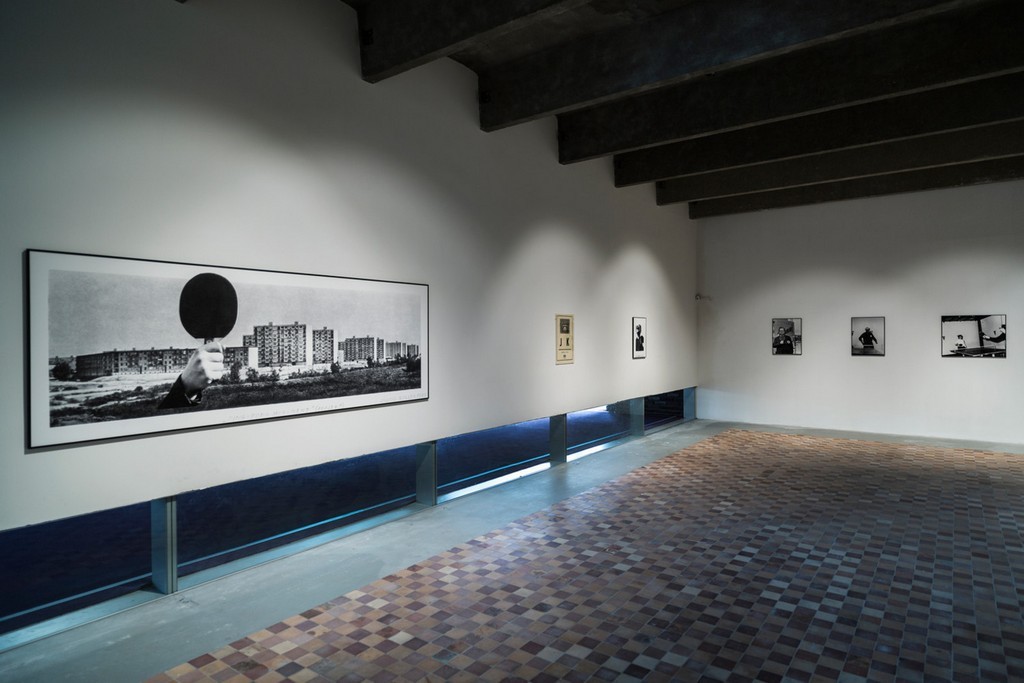 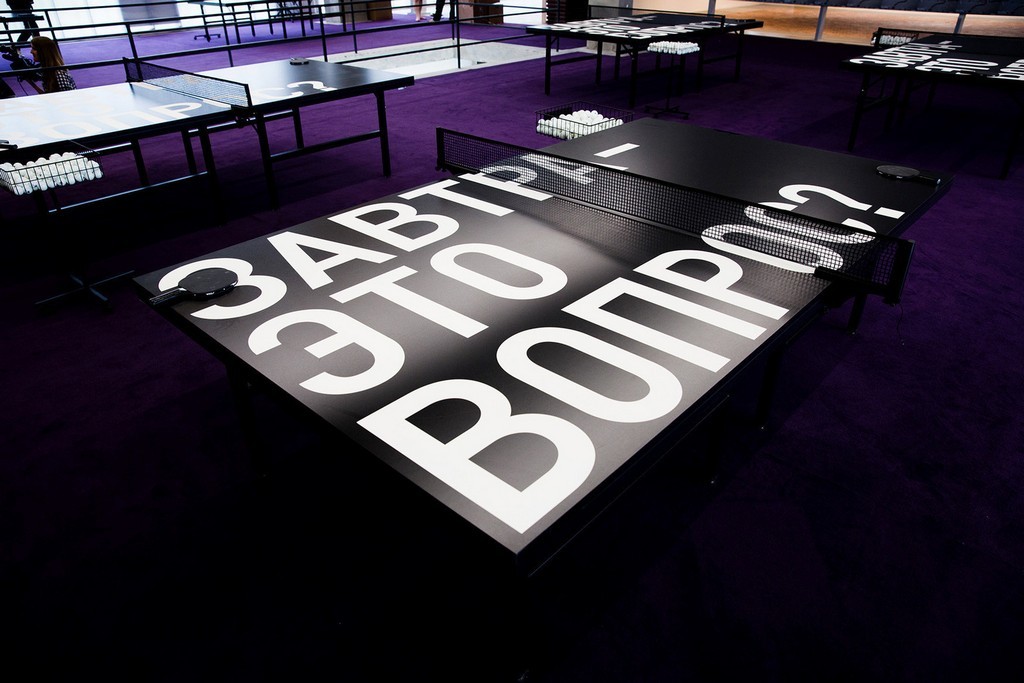 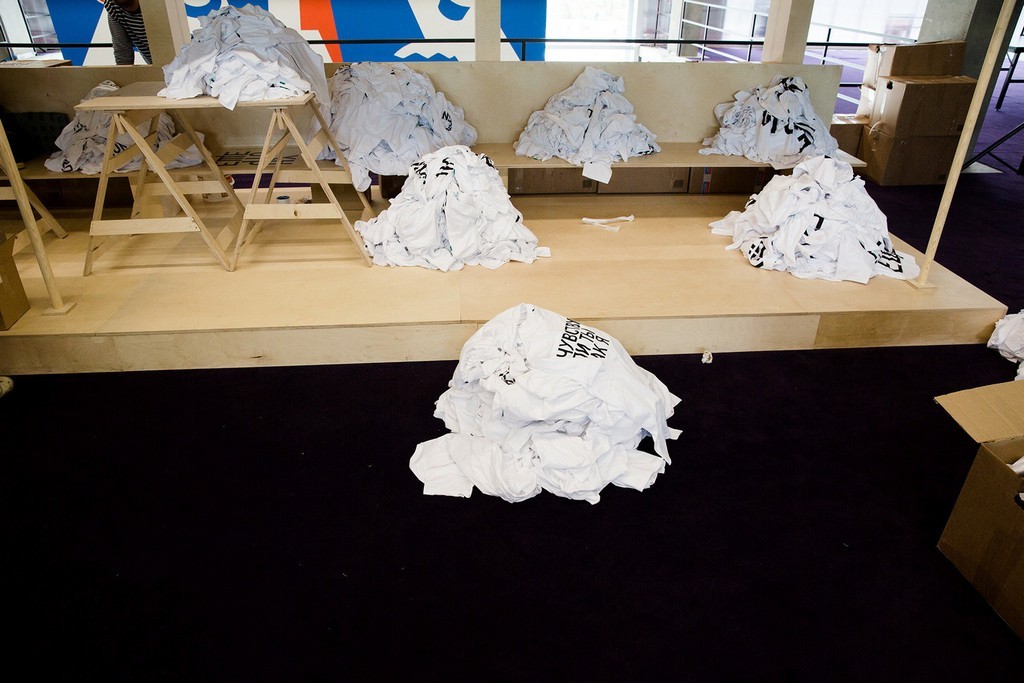 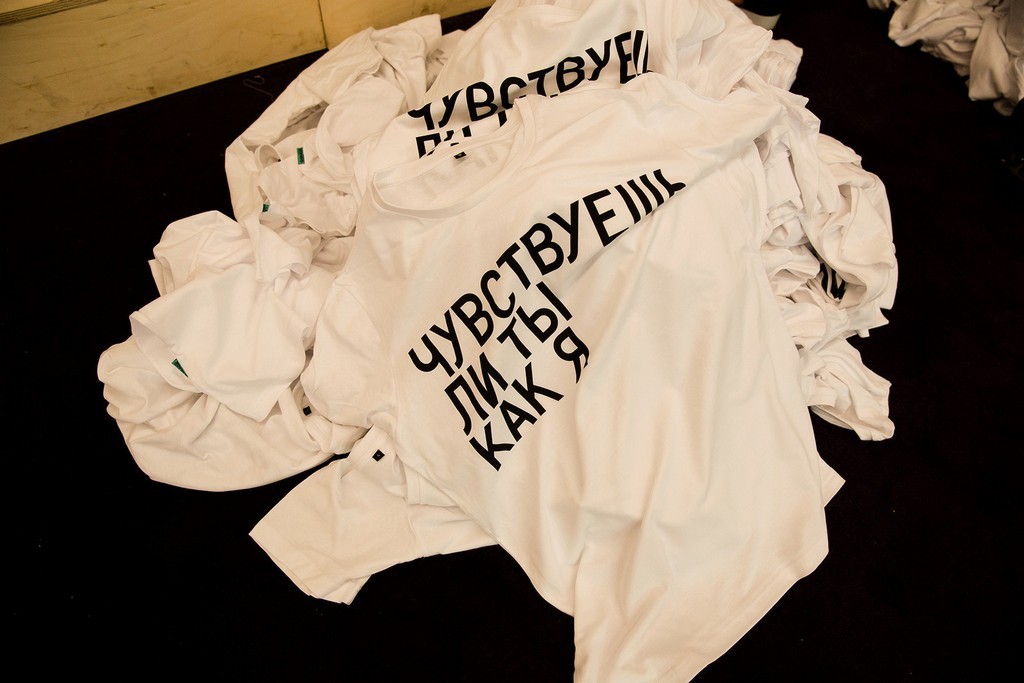 Developed after spending time in Moscow while also expanding on his personal ongoing interests, Tiravanija has created a series of interconnected participatory projects that form a dialog with the history of the Soviet Modernist building Garage inhabits, as well as with popular activities that the artist experienced and envisaged in the city, such as ping pong, producing self-styled t-shirts, and eating pelmeni (the quotidian Russian dumpling).

Adding another perspective to the exhibition, the artist has also paid homage to little-known Czechoslovakian conceptualist Július Koller, (1939-2007) who is both an inspiration and creative source for Tiravanija, particularly in his choice of the exhibition title: Tomorrow is the Question.

Occupying the Central Gallery and Skylight Gallery of the Museum, the exhibition both recalls and updates the original functions of the building as a social hub of the city, as well as highlighting the unique approach architect Rem Koolhaas took in envisaging a permanent home for Garage. Initially designed as a prototype for a 1200-seat restaurant that could be constructed in parks across the country, Vremena Goda (Seasons of the Year) opened in Gorky Park in 1968. The building quickly became a fashionable destination for Muscovites, and eventually the first “beat club” in the city, which emerged from a stage installed in the cocktail bar of the restaurant, providing an outlet for the underground music scene. Forty years later, and decades after Vremena Goda was left derelict, Koolhaas and his OMA studio undertook a groundbreaking preservation project by making very little visible intervention into the original concrete structure, as well as preserving of a number of Soviet-era elements to avoid what the architect calls “the exaggeration of standards and scale” that he considers as ubiquitous in new art spaces around the world. For Tiravanija, this unique approach to renovation and recalling local histories formed the starting point for exploring what the current and future iterations of culture and sociality could be in a contemporary museum.

Covering the floor in a deep plush, purple carpet, Tiravanija will transform the space into a surreal place for leisurely passing time, filling it with custom-black ping pong tables that are flanked by two “stations” reminiscent of Soviet-style bus stop architecture. These will house the equipment for serving guests pelmeni throughout the run of the exhibition, as well as a t-shirt factory, where visitors can choose to have one of a number of slogans devised by the artist screen-printed onto a t-shirt that they can take away. Working in collaboration with the Moscow Ping Pong Club, Tiravanija has also opened up the exhibition as the location for a major, citywide ping pong tournament, which will run through the Summer, as well as welcoming visitors to play in casual games each day.

In a conceptual game of “ping pong” with Czechoslovakian artist Július Koller, whose work is presented in Moscow for the first time, Tiravanija has selected pieces from the Július Koller Archive that both extend and accentuate the paradoxical relationships between art and life that the two artists share. Central to the “exhibition in an exhibition” are the presentation of a number of works that refer to Koller’s interest in table tennis, including the Ping-Pong Society that the artist founded for a month in 1970 in Bratislava, as well as Ping-Pong Monument (U.F.O.) (1971) which is a collage showing a gigantic table tennis bat lifted heroically towards the sky in front of a housing estate. Transforming Koller’s dry humor and “anti-happening” manifesto, into his own call to action, Tiravanija has also restaged one of Koller’s seminal works Universal Futurological Question Mark (U.F.O.), from 1978, wherein the artist sat with children in a field to form a question mark, which was then photographed. Unlike happenings, Koller’s acts intentionally avoided creating situations filled with psychological expression, but rather sought concrete embodiments of abstract symbols that denoted his specific attitudes to the social reality he was experiencing. In Moscow, Tiravanija photographed locals from the gates of Gorky Park as they formed a question mark at the entrance. This image will be produced as a poster, which will be presented within the exhibition.

Thanks go to Georg Schöllhammer and the Július Koller Archive, as well as Gavin Brown’s Enterprise and the Rirkrit Tiravanija studio for their assistance in the preparation of this exhibition.

Rirkrit Tiravanija was born in Buenos Aires, Argentina in 1961 and is currently based between New York, USA and Chiang Mai, Thailand. Recent exhibitions include: Just Smile and Don’t Talk retrospective at Kunsthalle Bielefeld, Germany (2010); A Retrospective (Tomorrow is Another Fine Day) at the Museum Boijmans van Beuningen in Rotterdam, Netherlands, the Musee d'Art Moderne de la Ville de Paris, France; and the Serpentine Gallery, London, UK (2004). Tiravanija has been selected for the exhibition All the World’s Futures at the 56th Venice Biennale, Italy (2015). Tiravanija is a lecturer in Visual Arts at Columbia University School of the Arts and one of the founders and curators of the Station Utopia project, a collaboration between artists, curators and art historians. He is also the president of The Land Foundation, an educational-ecological project located in Chiang Mai and part of a collective alternative space called VER located in Bangkok.