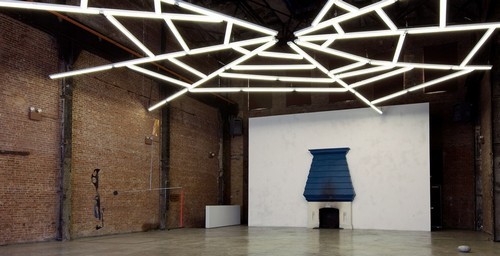 The New Décor is an international survey of over 30 contemporary artists from 22 countries who have created sculptures and installations which explore interior design as a means of engaging with changes in contemporary culture. The artists have transformed, subverted or recast the appearance of objects we associate with the everyday – a bed, a shelf, a lamp – into something uncanny, compelling, and revealing. Their work plays on the evolution of our interior and exterior environments, as objects metamorphose into a hub of competing references, evoking individual as well as collective scenarios, historical events as well as intimate encounters.

Ralph Rugoff, Director of the Hayward Gallery in London and curator of the exhibition commented “The New Décor challenges visitors’ perceptions of their own environment and explores a new chapter in the history of exhibitions looking at art and design. In French the word décor refers to stage sets as well as interior design, and in a similar spirit the works in this exhibition explore an arena between practicality and imagination, theatre and everyday life by drawing out the social, historical and personal stories which are embedded in the furnishings that surround us.” To celebrate The New Décor travelling to Moscow, Garage has invited two artists - Jaroslaw Kozlowski and Diango Hernández - to create newly commissioned works involving assemblages of locally sourced Russian materials and furniture. The resulting works will allow Garage visitors to reconsider their relationship with more familiar or basic domestic Russian forms as they are refashioned and reconceptualized into art work, they will be challenged to reassess their encounters with both sculpture and décor.

Ralph Rugoff (born 1957) Curator of The New Décor exhibition and director of the Hayward Gallery in London. Since his appointment as Director of the Hayward Gallery in May 2006, Ralph has curated the acclaimed exhibitions, Ed Ruscha: Fifty Years of Painting; Psycho Buildings: Artists Take On Architecture; The Painting of Modern Life and, most recently, The New Décor. Prior to his appointment, Ralph was the Director of the CCA Wattis Institute for Contemporary Arts in San Francisco from 2000, where he was also the founding chair of the Curatorial Practice Program at the California College of the Arts. He has organised numerous group exhibitions over the past 15 years as well as individual projects with artists such as Jeremy Deller, Ann Veronica Janssens, Mike Kelley and Mike Nelson. He has written for newspapers and magazines, and has contributed essays for books and periodicals on a wide range of contemporary artists, including Circus Americanus (Verso), a book of essays on popular visual culture. In 2002 Ralph served as a curatorial advisor to the Sydney Biennale, and in 2005 he was a curatorial correspondent for the Turin Triennale. In December 2005, he was awarded the Katherine Ordway prize given in recognition of important contributions to the field of contemporary arts and letters.
www.garagemca.org