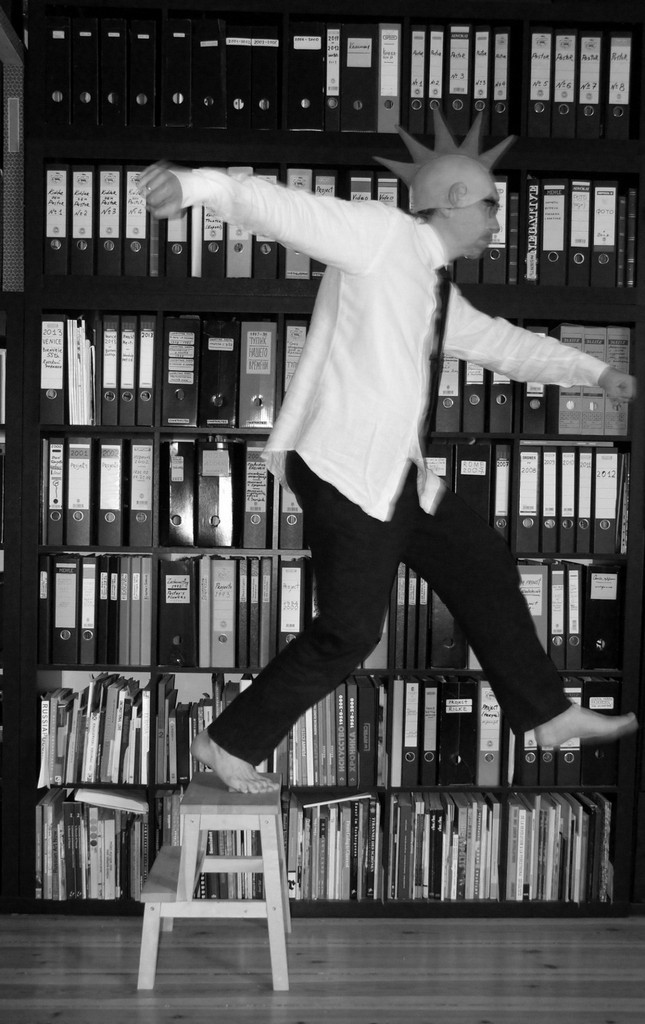 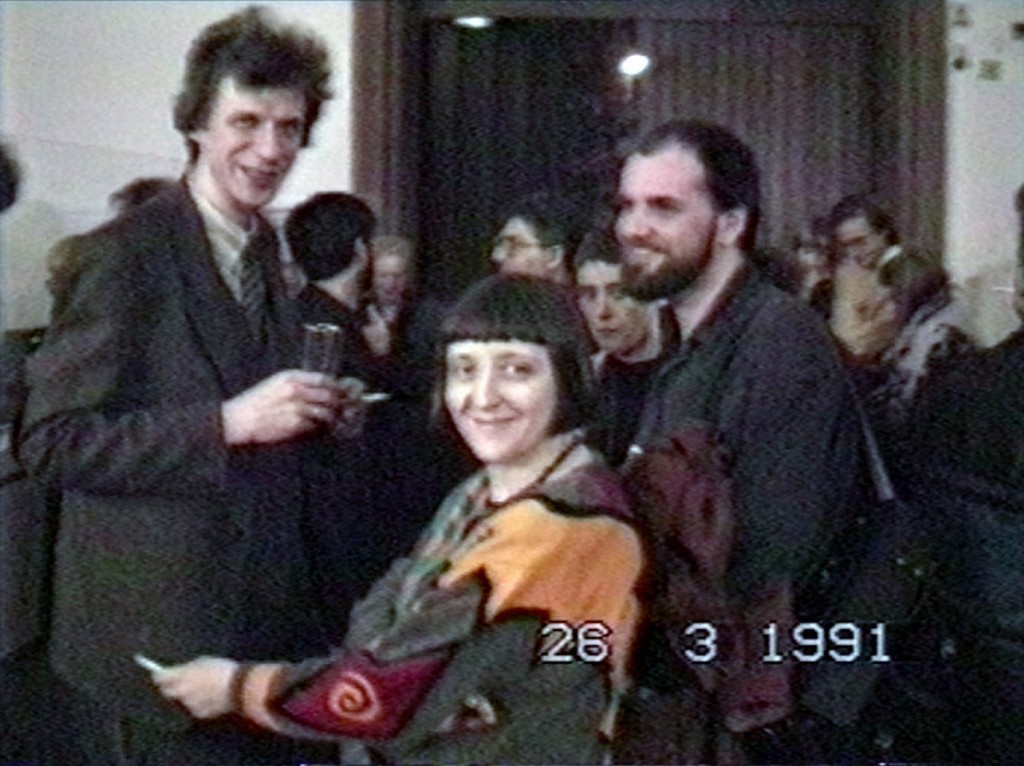 Nikolai Panitkov
Elena Elagina, and Andrei Filippov at the opening of MANI Museum. 40 Moskauer Kuenstler at the Carmelite Monastery in Frankfurt, March 26, 1991 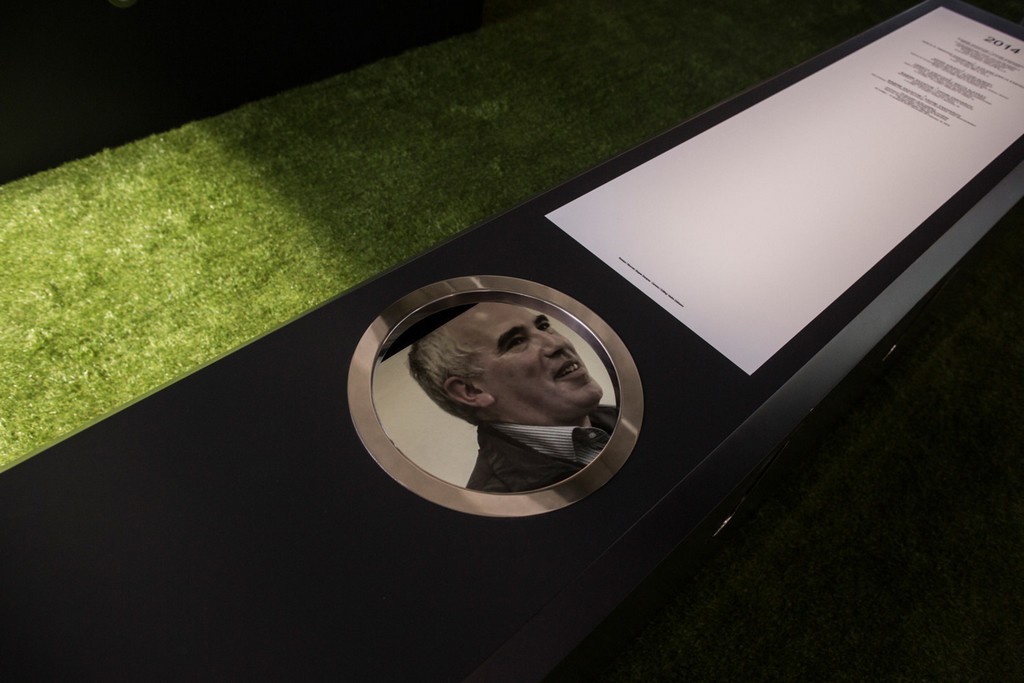 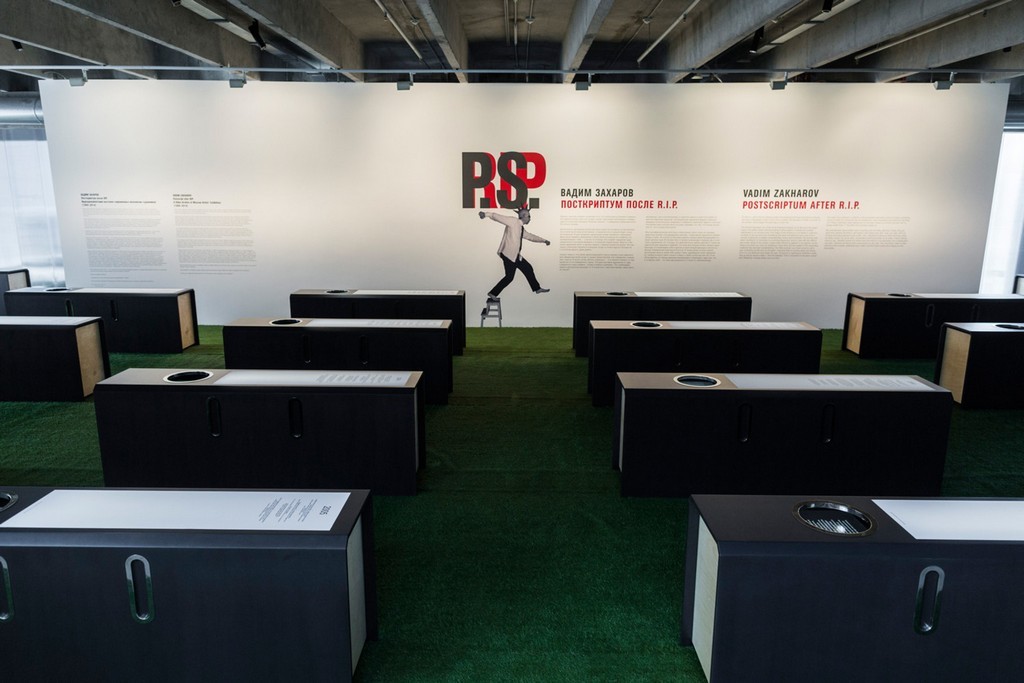 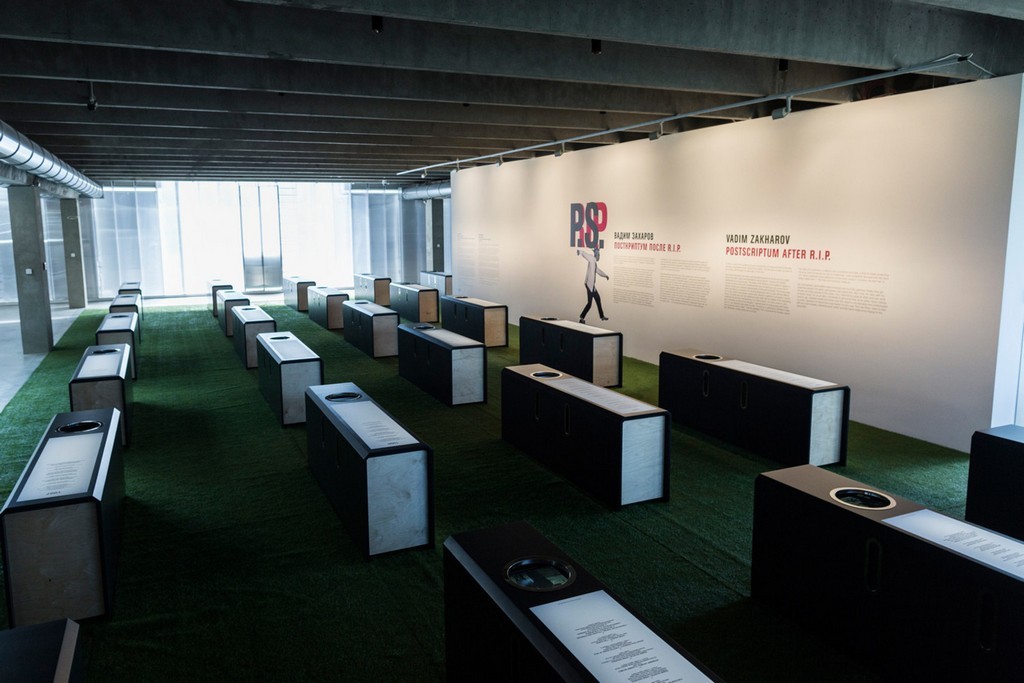 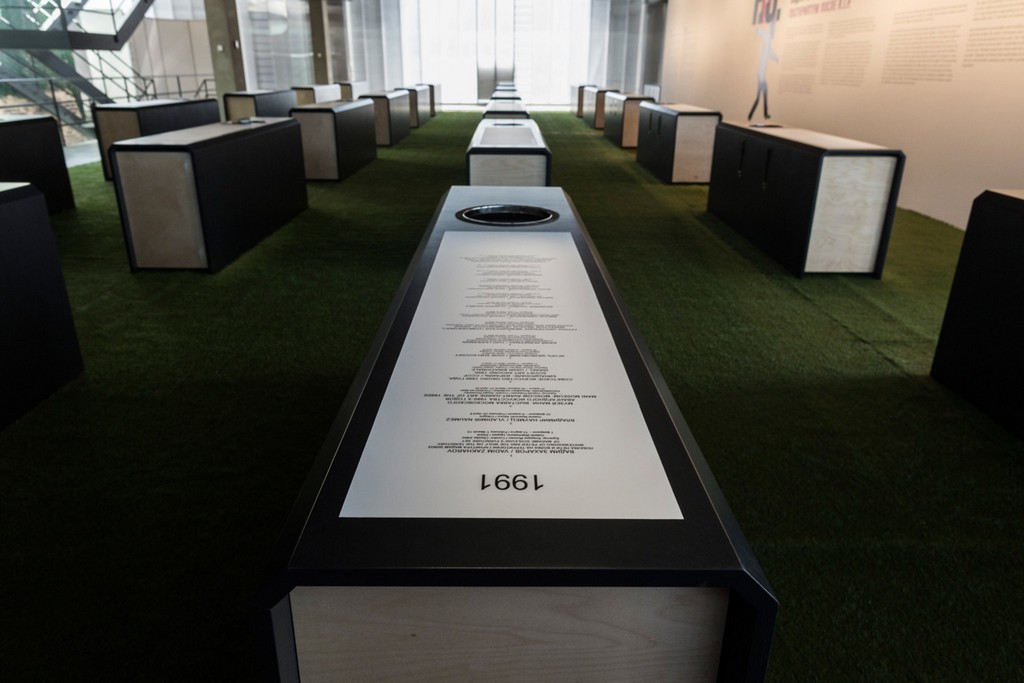 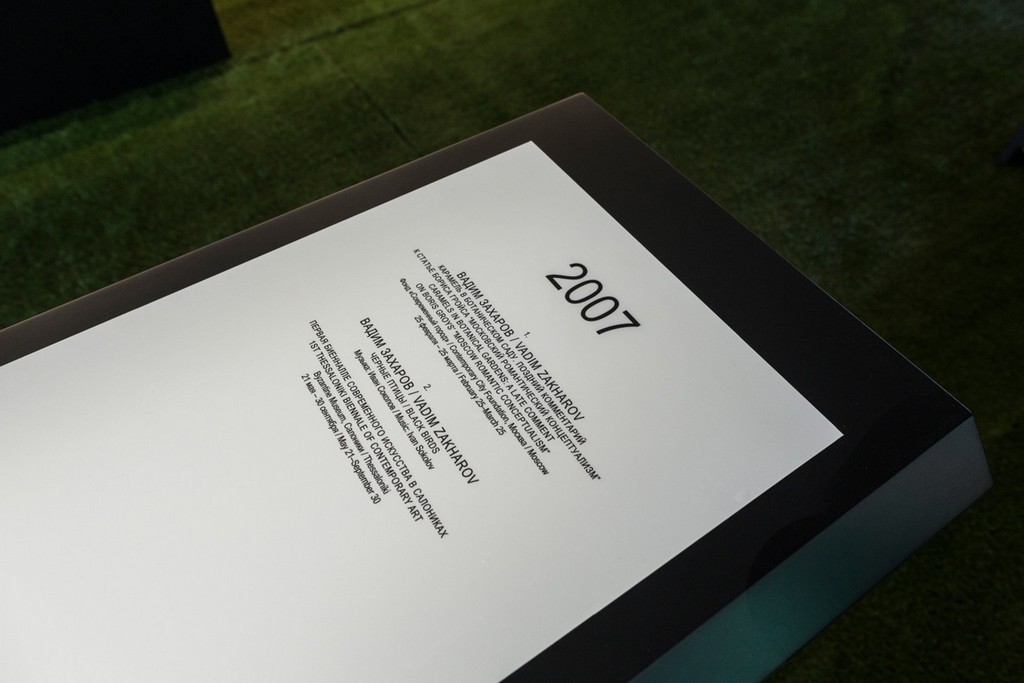 Artist Vadim Zakharov’s video archive—produced over the last 25 years—offers a unique overview of the Moscow Conceptualists, as well as their predecessors and immediate successors, through recording the exhibitions in Moscow and the West that made public the protagonists who formed this community.

Charting the first shows of these underground Russian artists during perestroika—when the boom of interest came from the West—through to the emergence of the post-Soviet condition, wherein the community both came of age and fractured, the Archive includes documentation of over 230 solo and group exhibitions that took place in Russia and abroad from 1989 to 2014. With footage of more than 180 shows that took place in cities such as Paris, Cologne, New York, Rome, Milan, and Berlin, the archive offers an unprecedented, nuanced, and singular view of an era when exhibition-making became the central lens through which artists could communicate with an audience they otherwise had little opportunity to connect with.

Zakharov relocated to Moscow in 1979 to become one of the youngest of the Moscow Conceptualist circle. He acquired his first camcorder in 1988, and a year later decided that it was a tool not only to make his own work but also to document his own experiences in relation to his friends and close colleagues. He was a person who understood the freedom of art as a situation wherein he had many choices—rather than waiting for someone else to record or produce the mechanisms through which artists are historicized, for example, his instinct as an insider was to take control of those functions—becoming both a participant and a witness to the rise, demise, and new-found strategies through which artists from his cohort could express themselves. As philosopher Boris Groys points out, “Vadim Zakharov takes on all the jobs offered by the art system—artist, curator, critic, designer, publisher, biographer, archivist, documentary filmmaker, historian, and interpreter”*—to affirm his cultural autonomy.

Free from any institutional burden of recording the shows, Zakharov’s archive is fastidious on the one hand and completely subjective on the other. An unbiased historian and a dreamer-inventor, he was making an extensive document for himself and others who were living through the times, places, and situations he archived. As a result, the collection of videos—the only comprehensive exhibition history of three generations of an artist-community to ever be made—contains evidence of seminal projects, as well as lesser-known but no less important episodes in the history of Russian contemporary art, featuring renowned artists such as Yuri Albert, Ivan Chuikov, Ilya Kabakov, Yuri Leiderman, Andrei Monastyrsky, Pavel Pepperstein, Viktor Pivovarov, and Dmitri Prigov, among many others, including artists who are now otherwise lost to history.

In the end, after a quarter of a century, the function of “chronicler” became a chore, rather than a passion for Zakharov. The process of documentation stopped representing the freedom of his choice to be an artist that refused categorization. With the same spirit through which he entered his project, in his manifesto, written for this show, Zakharov explains, “I liberate myself and others from the need to conceptualize and contextualize my work. I abandon all theory that could frame it.”

This exhibition and it's title, Postscript after RIP, represents the moment when Zakharov leaves his archive to rest in peace, and Garage Museum of Contemporary Art takes on the role of taking care of this collection. Designed by Zakharov, the show makes public an edited version of the archive using a format that resonates with the artist’s own practice—the file and folder—as an animated system through which audiences can take time, or browse through his lived experience of learning, celebrating, and sharing with a community.

Postscript after RIP is both an installation made by Vadim Zakharov and the first major display of his archive, which is now part of Garage Archive Collection.

The exhibition is curated by Vadim Zakharov and organized by Sasha Obukhova, Head of Garage Archive Collection.

Vadim Zakharov was born in Dushanbe, now Tajikistan, in 1959. He graduated from the Moscow State V. I. Lenin Pedagogical Institute with a degree in painting and drawing in 1982. Zakharov regularly exhibited at APTART Gallery from 1982 to 1984. In the early 1980s, he took part in compiling the MANI (Moscow Archive of New Art) folders and MANI’s To the Studios 1 publication, as well as starting his own collection and archive of contemporary art in Moscow. In 1989, Zakharov moved to Germany and founded Pastor Zond Editions, which published the small-circulation Pastor journal on Moscow Conceptualism from 1992 to 2001. He was the compiling editor of Moscow Conceptualism (2005) and participated in the Kapiton and Corbusier art groups from 2008 to 2010. Zakharov is a recipient of the Innovation contemporary art prize (2006) and the Kandinsky Prize (2009), and he represented Russia at the Venice Biennale in 2013. He is currently based between Berlin, Cologne, and Moscow.
www.garagemca.org