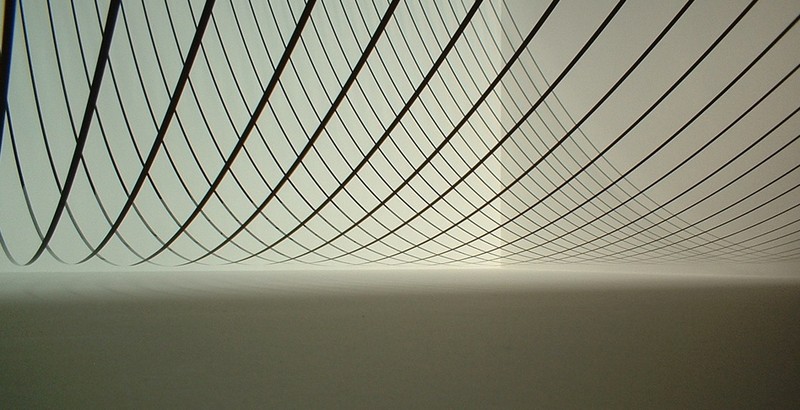 The New York-based artist Zilvinas Kempinas has attained world-wide fame for his large-scale installations and dynamic sculptures of magnetic tape. His constructions take the form of ephemeral architectural elements, which may be static or dynamic and volumetric or planar.

The project Still, created by the artist for the Garage Center, is an installation consisting of countless strands of magnetic film. Hung around the perimeter of the hall, they form a gigantic composition of parabolic lines.

Kempinas’ art is intended to alter our sense of space and reveal the hidden qualities of our familiar world. Placed in a particular environment, the objects create unexpected visual effects that cause the space to begin to break up, move, and vibrate. It appears capricious, suddenly taking on a clear shape, then immediately losing it: upon gaining a structure, it disintegrates.

The primary categories of Kempinas’ art are volatility and ephemerality; words which can also be used to describe our reality. The world today is seen by us as fragmented and inconsistent, and the endless streams of information only reinforce our sense of disorientation. In Kempinas’ works, the magnetic tape does not convey anything specific, but immerses us in an atmosphere of visual intensity and abstract contemplation; wherein the viewer is free to find his or her own meaning and means of interpretation.

Kempinas’ work has much in common with the aesthetics of minimalism, kineticism, and constructivism. In his works, the art of the past generates unexpected connections with the present and takes on a new and topical meaning. Still has a direct association with the legacy of constructivism through the architecture of the Garage Center. Like Kempinas, the constructivists were interested in creating a perfect spatial structure, the possibilities of transforming an object, and the dynamics of audience perception. However, unlike the work of his predecessors, Kempinas’ art is devoid of functionalism and practicality. The artist does not simulate the objective environment, but our new human experience, the value of which lies in the unpredictability of an individual’s life course.

Curator of the exhibition:

After graduating from Russian State University for the Humanities in 2002 she worked at the Newest Trends Department of the State Tretyakov Gallery and realized independent curatorial projects, such as special projects at First, Second and Third Moscow Biennale.
In 2008 she completed her studies at Curatorial Training Programme, De Appel, CCA, Amsterdam.
In 2009 started career at Garage Center for Contemporary Culture as the Head of Educational Department.
In 2010 realized "Russian Utopias" project at Garage Center for Contemporary Culture.
www.garagemca.org