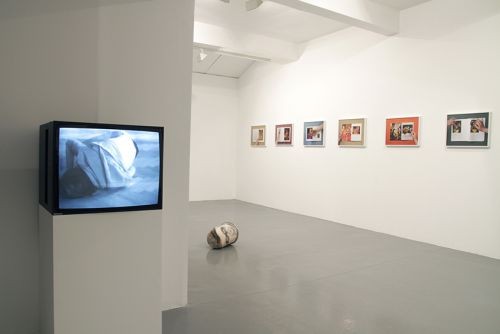 Focusing on the notion of corporeal memory, the group exhibition Late Barbarians explores how shifting social codes and cultural values have been embodied in canonical Western European art and architecture.

The exhibition takes its title from an expression by German sociologist Norbert Elias, which suggests that our future descendants may eventually consider us to have lived during an extended medieval period, implying that we share far greater affinities with our Barbarian forefathers than we might like to think (1). Similarly, the works on show question linear interpretations of history, invoking a present that is haunted by the gestures of our ancestors.

Paying particular attention to art historical representations of the body, photographs by Matts Leiderstam propose a queer re-reading of the gestures depicted in Renaissance paintings, whereas Lili Dujourie’s abstract, single-take “dances to camera” attempt to divorce particular habits of the body from their entrenched social connotations. In contrast, a new commission by Sidsel Meineche Hansen entitled HIS HEAD (2013-) comprises a clay sculpture and symposium that together examine the male human head, separate from the body, as a symbol of patriarchy and power.

Other video works in the exhibition explore reflections of the self in historical art and architecture. Juan Downey’s The Looking Glass (1981) decodes the iconography of the mirror in paintings housed in famous European museums and heritage sites, considering them as tokens of an adopted culture. Sharing Downey’s incisive humour, Chris Marker’s Pictures at an Exhibition (2008) presents a virtual exhibition tour in the online world of Second Life that weaves together personal and collective histories in an ad-hoc museum for the digital age.

Late Barbarians is the second exhibition of The Civilising Process, a yearlong programme of exhibitions and events at Gasworks inspired by Norbert Elias’s eponymous 1939 book, which looks at the development of the tastes, manners and sensibilities of Western Europeans since the Middle Ages. Between October 2013 and November 2014 Gasworks is working with invited artists to tackle a wide range of issues raised by this book in an attempt to understand their relevance for contemporary debates and practices. The Civilising Process comprises five exhibitions, a programme of interdisciplinary events, contributions to Gasworks’s online platform Pipeline and a printed publication.