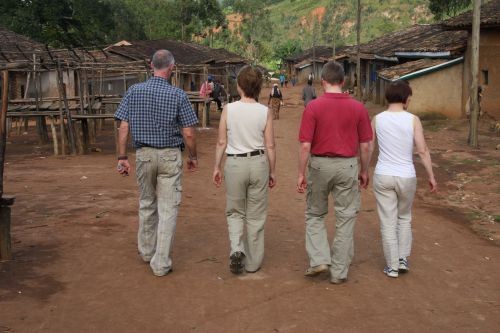 Model Court investigate the spatial, aesthetic and geopolitical aspects of legal procedure. Using video, sound, drawing and installation, the group interrogates the production, dissemination and transmission of the law, addressing the many technical problems encountered in the administration of international justice today.

Their exhibition at Gasworks comprises a newly commissioned film and installation focusing on the recently concluded trial of François Bazaramba, a Rwandan national convicted of genocide by a small district court in the Finnish town of Porvoo. Bazaramba’s trial was particularly unique because it made use of so-called ‘telepresence’ technologies in unprecedented ways. During the course of the trial, Finnish judges and prosecutors travelled to Rwanda and Tanzania to gather testimony, eventually setting up temporary courts in the Rwandan Supreme Court and a Hilton hotel room. Meanwhile Bazaramba was held in Finland and became a Skype participant in his own trial from his Helsinki prison cell.

Owing to these peculiar circumstances, Bazaramba’s trial is an unparalleled case study for understanding the relationship between media technologies and the much debated principle of ‘universal jurisdiction’ – whereby states or organisations can claim criminal jurisdiction over accused subjects regardless of their nationality or where an alleged crime was committed. To what extent do emerging technologies used in these forums reorient the process of justice geographically? And how do fibre optic cables, video conferencing software such as Skype, and cameras alter the conventions of testimony?

Written from the perspective of an unnamed technician responsible for the audio-visual setup of Bazaramba’s trial, Model Court’s film uses a semi-fictional narrative to explore the trial’s relationship to notions of aid, neo-colonialism and the production of history. Housed within an installation that appropriates the infrastructure present in the original trial, as well as in other courts of law, the film critically examines the complex and often dysfunctional audiovisual infrastructure used to bridge the jurisdictional divide.

Taken together, the film, installation and an accompanying series of events aim to interrogate this extraordinary yet naïve attempt by a regional Finnish court to intervene in a genocide that took place many miles and years away. The intention is not to present a history of Rwanda or to contest the culpability of Francois Bazaramba, but rather to tell a story about the transmission of the Finnish legal space into Rwanda, thereby engaging with the cultural specificity of so-called ‘international’ justice and its vision for Africa (so far the only continent to have been investigated by the International Criminal Court).
www.gasworks.org.uk