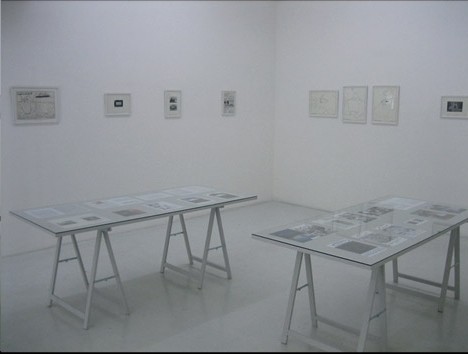 Following its participation to the collective exhibitions De ma Fenêtre (Ensba, Paris, 2004) and Links(gb agency, Paris, 2003), Július Koller, born in 1939, has chosen to present, for his first solo show in Paris, the activities of the “U.F.O Gallery Ganek”, a fictive contemporary art gallery that he founded and directed from 1971 to 1989.
Placed on the flat surface of the Ganek peak in the High Tatras Mountains of

Czechoslovakia, the “U.F.O Gallery Ganek” should be, according to the artist, « a hard accessible fictive location for a thought communication of myself and other earthmen with the unknown cosmic world.With its 'high ' location, it symbolized an encounter of the earthly with the unearthly (the Earth and the Cosmos).The natural high-mountain environment become a psychological cultural space - a medium (between the Earth and the Heaven) where a new artistic thinking can shoot up. »

Since the mid-60's, Július Koller's work questions the possibility of a better life in our social reality and the connection between people through art. Each piece, each action, each almost invisible gesture is deeply related to the real world, between imagination, poetry and political statement. “Roman Ondák: I'd like to ask you what led you, in 1971, to found the “U.F.O. Gallery Ganek”.

Július Koller: As the name suggests, it has some connection with the cosmos and it's in essence a fictive gallery, because my activity as a U.F.O.-naut needed a gallery of some sort and that's the way I created it. Roman Ondák: Where was the gallery actually located? Was it a normal gallery, or...

Július Koller: It had a precise location: on a peak in the High Tatras. The terrain there is very difficult for climbing, and it's inaccessible for the average person. The gallery is just a narrow strip which is immediately below the summit and is actually called a “gallery” in Slovak mountaineering terminology. So I used the term for my gallery, which is situated far above the ground and is actually a sort of symbol, a connecting of the worldly and the otherworldly. Roman Ondák: So, for us humans it would be inaccessible - theoretically... Július Koller: Theoretically, for normal people ... even for climbers. So it actually served as a meeting-place of the easy to access and the difficult to access. (...)” Excerpts from a conversation between Július Koller and Roman Ondák, published in Július Koller Univerzálne Futurologické Operácie, Kölnischer Kunstverein, Tranzit,Verlag der Buchhandlung Walther König, 2003
www.gbagency.fr