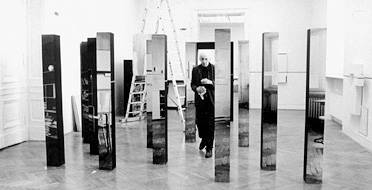 The Generali Foundation is devoting a retrospective to Edward Krasinski, one of the most important protagonists of the Polish neo-avant-garde from the 1960s and 1970s. It is the first retrospective to take place since the artist passed away in 2004.

Dark rooms with sculptures, enhanced by lighting effects; labyrinthine architectures and pedestals on which performative objects are arranged; the artist as actor who stages himself and his works in front of the camera, also thematizing his own creations ...

This exhibition focuses on Edward Krasinski’s unique exhibition designs, grandiose settings for his works for which he transformed the respective spaces into completely new spatial situations. The retrospective will also feature the first-ever comprehensive display of the (self-) representations that Krasinski created, often in collaboration with the photographer Eustachy Kossakowski. One series of these remarkable works was already included in the exhibition COLLECTED VIEWS FROM EAST OR WEST at the Foundation in 2004. At the same time, reference will be made to one of the main locations of his work, the legendary Foksal Gallery in Warsaw, which he helped to establish in 1966. Important exhibitions are reconstructed – including, for the first time, his contribution to the 1970 Tokyo Biennial. During the research for the retrospective exhibition, several works were found whose whereabouts had been unknown up to then and that are now being shown again for the first time.

Rooted in Surrealism and Constructivism, Edward Krasinski (born 1925 in Luck in what is today Ukraine) in the mid-1960s produced sculptures that are virtually reduced to a line. Quite early he employed conceptual strategies: at the end of the 1960s, he discovered for himself a standard, commercial, blue adhesive tape that he henceforth attached to various surfaces, always at a height of 130 cm – a standardized “scotch tape,” and at the same time the artistic marking for which he is known today. When the artworks for his exhibition at the 1970 Tokyo Biennial did not arrive, he sent the word “BLUE” 5000 times by telex, and exhibited this text on the long paper strip. In Paris, accompanied by concept art pioneer Daniel Buren, he pasted the blue tape on the walls of the courtyard of the municipal Museum of Modern Art and on the windows of the Rive Gauche art galleries. Even during the communist regime in Poland, Krasinski’s works were shown at international exhibitions early on, including in New York.

An important field of work is his studio, which Edward Krasinski took over from the Polish constructivist Henryk Stazewski, at first sharing it with him. From 1988 on he then turned it into his own artistic environment, making it again the subject of his works. At the same time, the studio functioned as an important communications centre – in the 1990s he had increasing contact with young artists from Poland and abroad. With humour and irony, Edward Krasiński created a heterogeneous and complex body of works that oscillates between painting, sculpture and installation art, covering performative and conceptual aspects.