Modernism as a Ruin 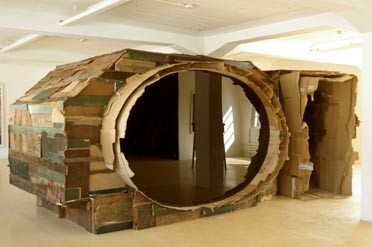 The exhibition focuses on the design for a more human and timely society developed by Modernism from the beginning of the twentieth century: design for new forms of living and for new cities. What has become of this utopia?

The architectural and design concepts of the featured artists reflect the “models” of utopian, pure design in its stage of deterioration, sometimes preserving moments of the crystalline or which embrace decay, entropy, ruin, “rust” (Smithson), but also the idea of bricolage, the use of “what there is,” related to the concept of recycling.
As such, these concepts formulate attempts to survive using the remains of a fallen civilization—the final resources of the “last days”. But they also bespeak an almost utopian notion of “sustainability,” the idea of a better society, born out of the spirit of dystopia. If desolation, dilapidation, and slummification—as hopeless and merciless final signs of an exploitative, inhumane society based on competition, profit, and fanaticism—bring down the utopia of a humane, enlightened society, then humility is called for in order to make something out of nothing with whatever disaster leaves behind.

The resulting dystopias consist of fragments from millennia of human history, resonating with a mirrored remembrance of utopian design and architecture, calling for a new awareness that the available resources are finite and that the definition of the NEW, of progress, needs to be rethought.