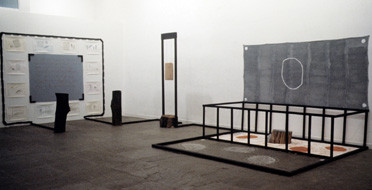 Ree Morton (1936–1977), an artist who is virtually unknown in Europe and has only recently been rediscovered by a growing American audience, was of the generation of Eva Hesse and Paul Thek. Not unlike them, she challenged conceptual art and the orthodoxy of 1970s minimalism by fusing elements of historic art, aspects of ritual, and decor with the analytical rigor of a structural mapping of space. Her thinking drew on a great variety of literary, philosophical, and ethnological sources. This exhibition at the Generali Foundation will be the first comprehensive retrospective of her work in thirty years, and the first show at an European institution.

Light and ironic on serious subjects without frivolity.
Ree Morton, Notebooks, 1975
Influenced by structuralist thinkers and writers and their predecessors such as Martin Heidegger, Maurice Merleau-Ponty, Ludwig Wittgenstein, Claude Lévi-Strauss, Rudolf Arnheim, Raymond Roussel, and Walter Abish, and by architects such as Christian Norberg-Schulz and Louis Sullivan, Morton was especially interested in the phenomenology of real or imaginary topographies and—a pursuit not uncharacteristic of her time—in the ritual sign-systems of indigenous cultures. Her early work, for instance, consists of cartographic transpositions of literary texts and biographically tinged mental maps into spatial experimental arrangements based on natural and found materials, such as logs and branches, combined with markings suggestive of signs. Later on, her repertoire also includes a rich vocabulary of heraldic and other iconographic borrowings. A witness to the urbanist modernism of her time, she—like Gordon Matta-Clark, Robert Smithson, and many Land Art artists—reflected on a particular interest in how to engage the relationship between nature and culture, between an archaeology of the industrial age and the recourse to so-called archaic methods of construction, especially the “primitive hut.”

Morton emphasized the value of intellectual action, of a mode of thinking that becomes effective only when it enters into real and everyday action. With the philosopher Miguel de Unamuno, she spoke of the “method of vitalizing thought.” Morton’s notes form instructions of a sort, intended to guide her own actions, instructions she used to compel herself to be precise as she engaged other artists and intellectual currents.
From 1974 onward, her idiom becomes more expressive: as an interloper of form, she did not shy away from ornaments, extreme color choices, and unconventional materials. Later on, her repertoire also includes a rich vocabulary of heraldic and other emblematic borrowings. Her installations, as it were, became baroque stage designs. At the same time Jerzy Grotowski, the Polish theater director and theoretician of the “poor theater”, inspired many during his stay in the United States and also influenced Morton’s tendency toward the theatrical and performative minimalization of effects.

In 1977, after a phase of proliferating shapes and colors, she called herself to order and earnestness: “It seems to me that things have to be more serious ...” Her Manipulations of the Organic, an homage to Louis Sullivan, were her last work.
Morton came to art late in life; as she explains in a notebook entry: “My career probably began at the age of three, when I took up watching ant hills and protecting lady bugs. This caused a long interruption in my artistic progress, because my family read this as an interest in science and directed me to nursing.” Morton married a naval officer and gave birth to three children before she began to study art; she graduated with a BFA in 1968 and received an MFA in 1970. Morton died from injuries sustained in a car accident at the age of 40.

This exhibition at the Generali Foundation, Vienna, featuring ca. 40 central works, is the first comprehensive show of Ree Morton’s art since the 1980 retrospective at the New Museum, New York. The exhibition seeks to recognize Morton’s work, which is characteristic of its era and yet seems timeless, and to make it accessible to a wider audience.