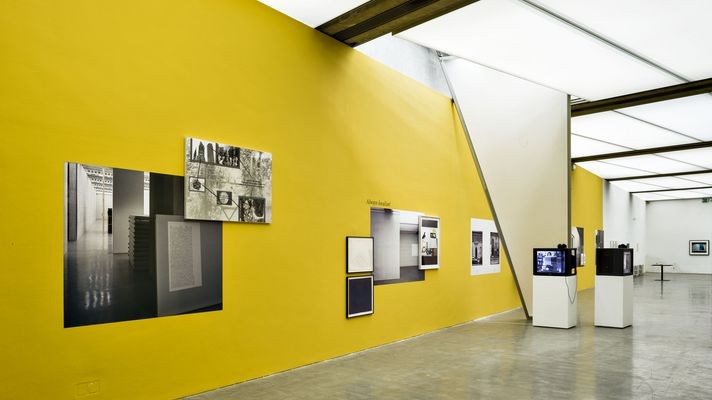 On occasion of the twenty-fifth anniversary of the Generali Foundation, three international curators—Guillaume Désanges, Helmut Draxler, and Gertrud Sandqvist—will each design an exhibition using very different presentation formats to reflect, from their individual vantage points, on the Generali Foundation’s collection, institutional and exhibition politics, and hence its contribution to historiography on the basis of institutional work. These different perspectives the curators illuminate, the questions they raise concerning the definitions of what is called conceptual art or—more broadly conceived—conceptualist art and what it means to collect and curate it, and their reflections on the relationship between conceptual as well as historic display strategies and the works of art form the point of departure for the subsequent discussion events and lectures throughout the anniversary year. Guillaume Désanges has turned his attention to the “pioneering days” of conceptual art in the 1960s and 1970s, embedding the works in a display that draws on the didactic formats used, for example, in exhibitions of cultural history. Helmut Draxler, meanwhile, focuses on the complex interrelation between the principles of collecting and exhibiting.
Exhibiting and collecting: a reciprocal relation
Collections constantly move between the accumulation and the arrangement of objects, between their preservation and their exhibition. They develop their own logics and a historical thinking that is immediately bound up with the self-conception of modernity between knowledge and order, imposition and power, accumulation and extravagance. The collection itself has long become the object of a debate that is mostly about its modes of arrangement in space and its sequences in time. The modes of arrangement in space “represent” an order constituted by knowledge, capital, and power; the sequences in time engender a genealogical or evolutionary principle that confers a past and a future on this order.
The exhibition The Content of Form seeks to demonstrate that these codes of spatial and temporal arrangement are fundamental traits of modern thinking. It is accordingly meant to be something other than just a selection from the Generali Foundation’s collection: it is a curatorial-discursive project that explores the collection as a principle. Operating along three fundamental concepts—“representation,” “conversation,” and “genealogy”—that will be modeled in the exhibition by details from historic paintings, a wall design is developed that comprises exhibition photographs from the history of the Generali Foundation, colors, and texts that relate to the selected works. The latter are thus always assigned to specific discursive and institutional contexts. But they may conversely also be read as peculiar modes of articulation whose formal organization always already adumbrates the “logic of the collection” (Boris Groys). Considered in this light, collecting and exhibiting no longer appear as extrinsic to the works; they just as importantly structure the works internally. Works, exhibitions, and the collection are revealed to be mutually interrelated modalities of symbolic production.
The fragility of the collection
The Content of Form will lend the individual works an aura of the representative, while also rendering the collection’s aspects of contingency, marginality, and exclusivity tangible—for instance, by including exhibition photographs of a number of works that were not acquired for the collection. In its formal decisions, too, the exhibition will tend to take a contrapuntal approach to the aesthetics of the Generali Foundation as it stands today, where modernist techniques have played a dominant role; the goal will be to highlight the fragility of all decisions between historicization and adaptation to contemporary issues, between canonization and marginalization, between universalization and localization.

In addition, monitors in the concrete exhibition space will connect the collection to the depot, the corporate leadership, and the public sphere. The tensions between these diverse elements—between the wall design featuring texts and photographs, the monitors, and the works—will, it is hoped, invite complex associations, creating leeway for experiences that defy didactic resolution, and facilitate application of the collection’s imaginary “codes” to the concrete institutional and site-specific dynamics.

Helmut Draxler is an art historian and cultural theorist; he lives in Berlin. He was director of the Munich Kunstverein from 1992 to 1995 and professor of aesthetic theory at the Merz Akademie Hochschule für Gestaltung, Stuttgart, from 1999 until 2012. Draxler was a member of the Generali Foundation’s Artistic Advisory Board from 1992 to 1994. Between 2004 and 2006, he was involved in the research project “Film and Biopolitics” at the Jan van Eyck Academie, Maastricht (with Sabeth Buchmann and Stephan Geene). Since January 2013, he has been professor of art theory and art education at the Academy of Fine Arts, Nuremberg. Current research foci include a theory of the communication of art and the thinking of history in the historiographies of modern and contemporary art. Draxler has also curated exhibitions, including Shandyism: Authorship as Genre at the Vienna Secession (2007). He has published widely on the theory and praxis of contemporary art. Writings include Gefährliche Substanzen: Zum Verhältnis von Kritik und Kunst (Berlin: b-books, 2007); Die Gewalt des Zusammenhangs: Raum, Referenz und Repräsentation bei Fareed Armaly (Berlin: b-books, 2007); Film, Avantgarde, Biopolitik (with Sabeth Buchmann und Stephan Geene, Vienna: Schlebrügge Editor, 2009); and Theorien der Passivität (coedited with Kathrin Busch, forthcoming).
foundation.generali.at