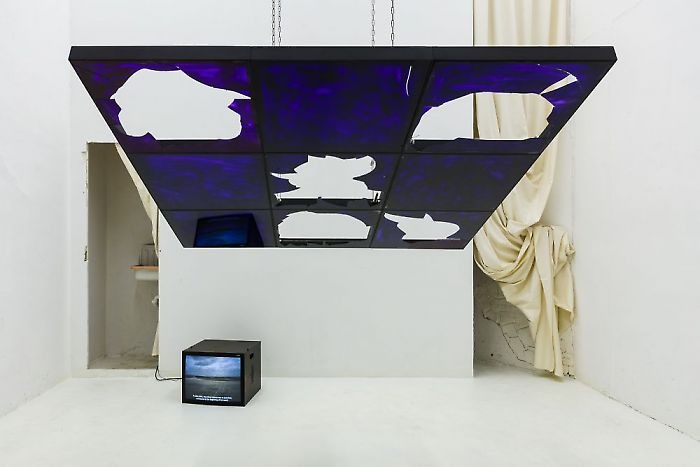 All works of art are like a window open to creation; a kind of transparent screen is mounted in the window frame; through this screen, objects appear more or less distorted, as they undergo greater or smaller changes in their lines and colors. These changes depend on the nature of the screen; thus, creation is no longer credible or realistic, as creation is transformed by the medium through which the image passes. In Salinger’s Teen Novel, Zooey looks out the window and watches a little girl playing with her dog. He says: „There are nice things in this world, we are all such morons to get so sidetracked”. The window appears as a vantage point to gaze into other people’s (beautiful) lives. In Emma’s house, the window is tantamount to a screen, where she can project her fantasies (which shall never turn into reality); a dissociation; a tie between the external space and the interior space; two sides; two perspectives; a facial expression reflects in the window glass, while a view outside turns into an expectation; „There it was before her – life”. To the Lighthouse ; a family observes as the days pass and their lives develop through a window; outside the window; a distant object – apparently unobtainable, reveals yearnings, frustrations and desires; the sun sets; days go by; images, impressions and sentiments remain as fragments of the past and sometimes the present. There is no window without a story; for the window is an architectural work of art, that stores memories and tells different sides of one particular story. There is no window without a screen; a certain gaze or a plain glass is always in between; a created separation; as time passes, the window becomes a symbol for contemporary longings and memories of past days; a cracked screen; a broken window; capable to reveal one’s inner feelings; sometimes hidden behind a bunch of curtains, that once belonged to a (familiar) home. -Alexandra-Maria Toth
www.georgkargl.com
Edit Georg Kargl
Isa Melsheimer
Kindl
Berlin
Eugenio Ampudia
Gran Teatre del Liceu
Barcelona
Nam June Paik
Stedelijk Museum
Amsterdam
How to Make a Paradise
Frankfurter Kunstverein
Frankfurt
Steven Parrino
Kunstmuseum Liechtenstein
Vaduz
Katrín Sigurðardóttir
National Gallery of Iceland
Reykjavik
Katharina Grosse
Hamburger Bahnhof
Berlin
Christo and Jeanne-Claude
Palais Populaire
Berlin
Siren Eun Young Jung
Kunstverein Düsseldorf
Düsseldorf
Gilbert & George
Kunsthalle Zürich
Zürich
Jasmina Metwaly & Yazan Khalili
KW
Berlin
Jeremiah Day
Badischer Kunstverein
Karlsruhe
Sheela Gowda
Lenbachhaus
Munich
Biennale of Sydney 2020
Sydney
Bergen Assembly 2019
Bergen
Steirischer Herbst 2019
Graz
Whitney Biennial 2019
New York
58. Biennale di Venezia
Venice
Urbane Künste Ruhr 2019
Bochum
33. São Paulo Biennial
Sao Paulo
6. Athens Biennale
Athens
Manifesta 12 Palermo
Palermo
Riga Biennial 2018
Riga
Liverpool Biennial 2018
Liverpool
Steirischer Herbst 2018
Graz
10th Berlin Biennale 2018
Berlin
Made in L.A. 2018
Los Angeles
Biennale of Sydney 2018
Sydney
New Museum Triennial
New York
Odyssey
Möhnesee
Skulptur Projekte Münster
Münster