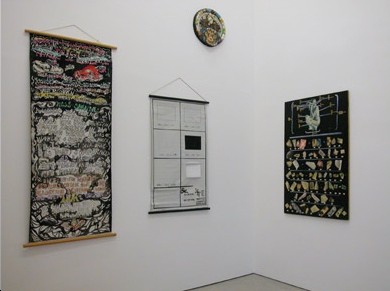 These two basic principles run through all works of the artist Arthur Köpcke, which still today challenge the beholder to face everyday life in an inventive fashion. With both humorous as well as serious intentions, they present us with a challenge: “Use your own imagination in an infinite process.”

The life of Arthur Köpcke, born in 1928, was marked by the questioning of his very existence and surroundings, as conditioned by his biography. Traumatic xperiences at the end of World War II left Köpcke with the sensation of living in a ermanent state of emergency. A self-taught artist, his work included literature, painting, object art, conceptual art, and action art. When he failed to make a living from his art in the 1950s, he decided to make the best of his situation in Denmark: Köpcke discovered likeminded individuals in the international Fluxus movement, hich had the fusion of art and life as its goal. An issue was no longer creating orks to be sold, but making art that fed on everyday life. The focus was on the ustomary, not the exotic, the event and not the pose, the process and not the rtwork.

Köpcke seemed to direct his entire attention towards the media image and the consumer articles of his time, in so doing developing a new respect for things therwise only perceived in passing. Köpcke ironically and humorously reflected upon massproduced items, affordable, quickly used up, and then often carelessly discarded, in his collages and montages, developing them into something else by integrating written elements into his images, later having his texts read, and then releasing recordings of readings, he emphasized the importance of the relationship of text to image: characteristic for his visual language was the alternating use of mpty spaces and textual or visual signs. With textual and visual questions and nstructions (‚Fill: With Your Own Imagination’) he tried to remove the beholder from a passive attitude.

In late 1957, together with his wife, Köpcke opened Galerie Køpcke in openhagen,
originally to secure his Danish visa. With his roots in futurism, Dadaism, and urrealism, the focus of the gallery lied in Fluxus and Nouveau réalisme, and for the following five years of its existence the gallery became a center of avant-garde art in Denmark. Köpcke thus became a key figure in bringing Fluxus to Denmark and ultimately to all of Scandinavia. Not only did he move among the media with ease, but among roles as well—as an artist, gallerist, and art educator. As an organizer and participant of many Fluxus events, Köpcke developed to an independent figure of the scene. In his spectacles with actionistic character, artists such as Piero Manzoni, who exhibited his Merda d’artista in his galleries, Niki de Saint Phalle, Daniel Spoerri, and many others took part.

Köpcke’s Piece No. 1, Music While You Work, performed during the first Fluxus oncert at Nikolaj Church (Köpcke’s new gallery location as of 1962) is a very complex fusion of music, poetry, and visual art. This piece represents what is very characteristic for the two legendary Fluxus events Fluxus Fluxorum (1963) and Festival of Misfits (1962): the destruction of barriers between music, poetry, and visual arts—or any other discipline. Between 1963 and 1965, the key work eading/work-pieces-manuscript emerged, a simple collection of 127 (resp. 129) pieces that marked a turning point in Köpcke’s oeuvre. While up until this point the artist had taken up impulses from outside, from now on he began creating his own unforgettable style that transported the thematic core of Fluxus (but without dopting its typical layout).

The exhibition at Georg Kargl BOX shows a selection of twelve works by the Fluxus artist. The collage from 1973/1974 Time (&) [plus] yours. combines many of the elements mentioned: on the Köpcke advertising board are bits of paper plates, aper, porcelain tiles, and ribbon, in part painted. The elements form in their light and playful character a contrast to the rough material aesthetic of the beer keg cover. The hourglass placed on the lower part of the picture, together with the ext, implies a reflection on the general and subjective cycle of time and fugacity. The work Treatment of a Canvas, + You: Play Chess with Money: Each Team Its Side of the Coins from 1965 with framed by two wooden rods on both sides, eminiscent of a map, challenges the beholder to a game of chess; coins replaced the various chess figures, depending on their nominal value.

Köpcke inspired Danish art with his own actions and by promoting new currents. In is famous quotation (“I think every night about Addi Køpcke, Joseph“) Joseph Beuys expressed his respect for Arthur Köpcke as a person and an artist, nderscoring the importance of the artist, who died in 1977 at the young age of 49.
www.georgkargl.com