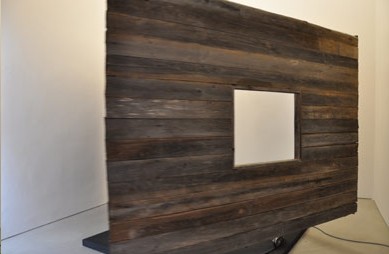 A dark wall of boards fills the gallery space of Georg Kargl BOX. The object, which
looks like a cabin, is placed on metal tracks and rotates on its own axis driven by an electric motor. The cumbersome sculpture fills the space, and makes it imp ssible to enter the white cube, creating a space within the space, but only allowing a view from the outside through the gallery window. Vision has to compensate for what is lacking in terms of physical-haptic experience in the viewing space. In so doing, the gallery space changes into a stage situation and the street in front of the gallery changes into a spectator space. This spatial separation from the object and the beholder alludes to the screening situation in the cinema, which assigns the viewing gaze a fixed location. Besides its materiality (construction wood), an antithesis to the white cube and the aesthetic of the façade of the gallery designed by Richard Artschwager, the object fascinates in its play of gaze constellations. The rotating wooden body generates a visuality that is produced by the apparatus, and is a visual prosthesis like those nineteenth century optical devices, such as the mutoscope or the kinetoscope, that experiment with the laxness of vision.

The young media artist Björn Kämmerer, whose oeuvre already encompasses a range of noteable found-footage works and video installations, designed this spatial installation. It engages with the relationship between architectural and cinematographic space as most of his more recent film works and video nstallations. The wood object at Georg Kargl BOX played the main role in ämmerer’s current film gyre (2009), a 35 mm sequence, that shot the rotating object in various camera and light settings. On the film set and in the gallery redesigned as a theatrical space, the different dimensions of the wooden walls play with the visual format of the moving images. For example, the second largest wall is built in dimensions of 1:1.66, and can be seen as an ironic commentary on the relations in the wide-screen format. The exhibition space in a certain sense ennobles the craft of film, showing insights into the visual practices of the cinema. They present in a single image both the mechanics of the apparatus (projector) as well as the level of filmic representation (projection). Walls and window openings create different framings and generate a permanently changing film in film. The apparently unimposing wooden construction thus represents nothing less than a way of thinking about the cinema. It could be understood as a kind of built reflection on the filmic representation of the moving image. In so doing, chitectural and filmic space serve as two media equal in terms of visual xperience. The only fixed indications are quotations and references like the built ommentaries on projection sizes. Borrowing from Gordon Matta-Clark, the wood onstruction includes cut-outs, here window openings in a relation of 4:3 that cut the spatial texture and open up the inside of the structure. The window is a familiar metaphor for the cinema itself and offers in the context of this exhibition he possibility of a further decoding, that is, as a shop window in urban space. ince its early days, the cinema has been closely linked to the commercial staging of commodities and to other entertainment forms like the circus, the variety show, or the fair. In Björn Kämmerer’s spatial installation, this metaphor of the window, hat is, the viewing of an image in a frame converges with the exhibition of a esired object, and thus plays with pleasurable and illusory projection in cinema xperience (for example, cinema as a virtual space).

What we can see is a door that cannot be opened towards the outside. This frustrates the expectation of the beholder. The “missing” entry on the outside of he cabin clarifies the break with everyday perception. This results in this case not in a homogenous visual space. Associated with the film genre of the uncanny, which since the early narrative cinema has operated with the limit between the outside and the inside, the impression emerges of a paranoid film space that with constant reference to the continuous practice of visual spatial construction refuses an overall view (and visual control).

An especially striking aspect of the works of Björn Kämmerer is the way they allow film and architecture to enter into dialog with one another. The exhibited nstallation and the film gyre intersect with one another for they open up new ossibilities for thinking about media space in the realm of architecture, cinema, and film.
www.georgkargl.com