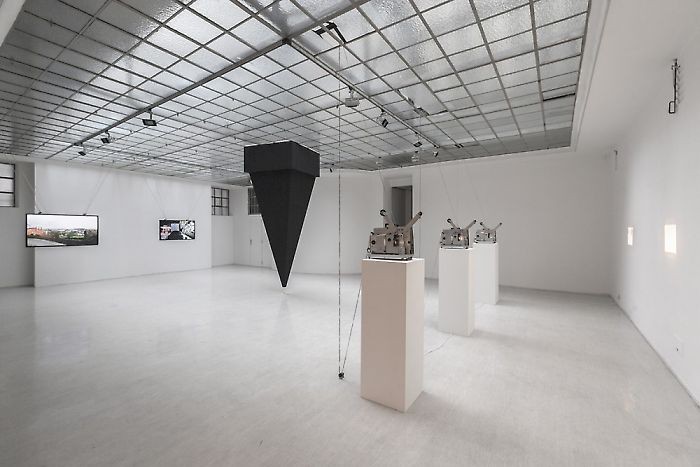 The exhibition Cinematic Scope at Georg Kargl Fine Arts combines the work of several young artists who engage with the realm of expanded film. With a title that can be understood either as the space of film action or a possible development, Cinematic Scope renews a discussion of traditional forms of projection in the contemporary reflection and artistic appropriation of the achievements of the expanded cinema movement of the 1960s and 1970s. If the artists of that period contributed to a new understanding of the media image and an expanded experience of the body in physical space through actions, happenings, environments, and multiple projections in a very fundamental way, the artists of the current generation engage with cinematographic spaces of projection under digital, post-media conditions. In the mid-1990s, the moving image finally arrived in classical spaces for (re)presenting art; ever since projectors have divorced images from their support, they can also be positioned freely hovering in space outside a black box that imitates the cinema situation. The entire architectural space can become a temporary screen beyond the apparatus of the cinema and integrate the beholder in the expanded visual space.

Cinematic Scope collects positions that show that the fascination for the now “classical” medium of film has by no means been lost; rather, the traces of a film aesthetic in visual art have multiplied enormously due to the rapid progress of technology since the 1970s. This is expressed in a whole range of installation concepts, from 16mm film sculptures to HD flat-screen environments, from DVD multiple projections to fully digital animation. Here, it cinematographic configurations of space with links to a specific architecture, the mise en scène of the framework of presentation, and the opening of post-media visual spaces still offer potential for development.


At the entrance of the gallery, German artist Björn Kämmerer placed a scaffold three meters in height, upon which a 16mm projector slowly rotates, projecting a short film of a bicyclist riding against the wall. In the restive architecture of the space, the image disappears again and again, reemerging after a brief period on the opposite wall, and ultimately including the public space of the other side of the street in the filmic experience of the space. In that the apparatus and the bicyclist sometimes move in the opposite direction, an almost oppressive sense of the infinite is generated.


Using computer animation, Manuel Knapp projects a geometrically reduced structure composed of violently moving surfaces and lines on two shiny black screens positioned separately from one another. Not only do the visual zones inside the virtual spatial constellation overlap in front and behind, changing, shifting, and refracting, they also seem to open the limits of the actual space when the projection meets with either the changing surface or the matte wall. The result is an inextricably interwoven spatial configuration subject to constant mutation. Knapp is interested in surveying the limits of perception, for the intermediate spaces, gaps, and defects that emerge due to creations of the media system, which are calculated, and yet unpredictable.


In his three-part 16 mm film installation Texas Loud Texas Proud, German artist Wolfgang Plöger silkscreened the last words of executed Texas prisoners onto blank film. Originally not intended for this purpose, the result on the polyester material is an irregular writing with varied colors that, as soon as it passes by the lens of the projector, becomes an abstract, scrawled fragment, while the text remains legible on the filmstrip that leads through the space. In the transfer from the classical print medium to the moving image, he creates a constant oscillation between narration and abstraction. The reception of film is subject to deconstruction and recoding and the representation of reality by the cinematographic apparatus and the linked change in perception is questioned. At the same time, in that the visual text loses its information content the failure of technology due to material moves the projection device and the film itself to the focus of attention.


The monumental work Pre-Projection by Slovenian artist Tobias Putrih takes the paradoxical position of simultaneously being a monumental sculpture and an apparatus of projection. A blunt pyramid turned upside down hangs freely from the gallery’s glass ceiling and transfers a tiny, abstract moving image to a silver spoon lying on the floor. The title of the work seems to indicate that there is no elaborate mechanical or digital apparatus hidden inside the pyramid, but a camera obscura, a device that has been known since antiquity. The image emerges through an illuminated ceiling fan, whose reflection falls through a small opening onto the spoon. By way of the complete dismantling of the medium of transmission, Putrih takes the principle of the cinema to its absurd limit, tying it to the realm of art, and points to the fragmented character of the reality and fiction of filmic representation.


In his three-part video installation Constructing/Dismantling, Andreas Fogarasi is concerned with a cultural complex of buildings outside Santiago de Compostela that was designed by star architect Peter Eisenmann. Ciudad de la Cultura de Galicia was planned to house a library, archives, an opera house, and several museums. Yet the spectacular project of immense dimensions is currently threatened with failure due to the lasting financial crisis in Spain, and is about to become one of around 800,000 ruins of modernity spread across the country. A video shows the abandoned construction site and the surrounding desolate landscape, the second video was filmed at a fair in Santiago and documents the dismantling of temporary fairground architecture. The third video focuses on a carpet of flowers that forms the number 2010 that is swept away by street sweepers until only the chalk outlines remain. Played backward, this results in an endless loop of reconfiguration and destruction that in relation to the other two videos becomes a fine emblem of development and the changes of city space that reflect in their architecture the promise of a better future and its failure, due to their ruinous state, setting a melancholic tone.


In his two-channel video installation Out of Projection, Croatian artist David Maljkovic also engages with the interweaving of memory and future visions, referring to film genres that are opposite in nature, documentary and science fiction. Out of Projection was filmed at the carefully guarded test course at Peugeot headquarters in the French city of Sochaux. The large screen in the foreground shows the former protagonist of the car company. For his film, Maljkovic brought the retirees back to their former workplace, and staged them as a missing link between the past and future by having them walk slowly across the test course pushing futuristic looking prototypes. The second smaller projection in the background shows a close up of interviews with the former engineers of the future. Quietly recalling the past, they reflect former utopias, desires, and promises that are interwoven to create a delicate image of time.