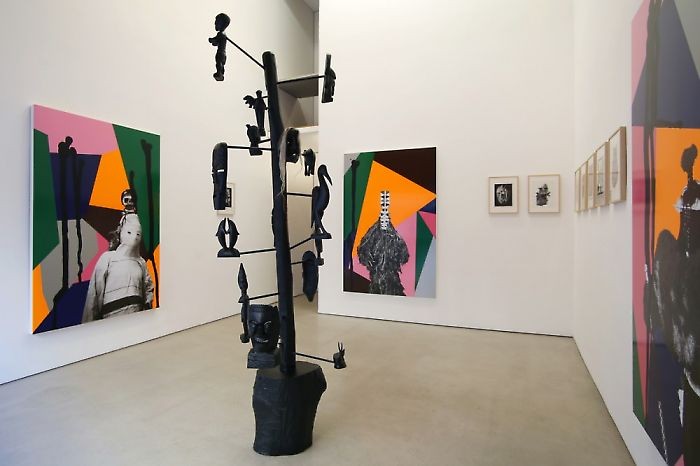 Since the 1990s, Costa Vece has been using social critique and the political to create art. His work is shaped by experiences growing up as a child of Greek-Italian parents in Switzerland and the issues of cultural identity and belonging that result. For some self-evident, but for others something unattainable: Costa Vece has made the issue of citizenship of an industrialized Western country a focus of his work in using flags. In 2006 at Georg Kargl BOX, he presented a tent made of the flags of those non-EU countries whose citizens were living in Austria at the time. As material, he used old clothing that he assembled in the patterns of the flags with safety pins.

At the latest with his participation at the Venice Biennale in 1999, Costa Vece has become something of a fixture among critical Swiss artists, such as Thomas Hirschhorn, Christoph Büchl, and Gianni Motti, whose “art is motivated by social politics and—because nourished by a personal background—is absolutely credible,” according to art critic Claudia Spinelli. All the same, he is still today not a Swiss citizen. Based on his sense of belonging to a country where he remains a foreigner, the tension between self and other forms the foundation for the artist’s latest exhibition at Georg Kargl BOX. The central element, the mask, finds its way into his sculpture, collage, and silhouettes in the most various forms. The mask as an emblem of identity or “non-identity,” that is, camouflage or masking, is used across cultures in ritual and religious contexts as part of dress or costume.

Costa Vece weaves them in his works into impressive overall structures that make it almost impossible to separate African masks from Swiss carnival masks. He arranges dolls, folkloric figures, and masks like trophies along a tribalesque wooden stick to branches, so that they appear like the leaves of a tree. In so doing, he combines two symbolic objects, the masks and the tree, standing for diversity and universal life. The material of the “trophy trees” is taken not only from countries such as Indonesia, Africa, South America, or Lötschen Valley in Switzerland, but also from the Internet. Finally, he paints “mask trees” consisting of tourist souvenirs and archetypical original material, with black paint, thus leveling diversity and differences in terms of quality. By way of this universe of incommensurable cultural regions, condensed in a single sculpture, Costa Vece sums up the contradictions of our globalized society.
While the “tree sculpture” evokes associations of cultic rites, the neon-colored collages on the walls seem like components of our Western culture, although Costa Vece here pursues a similar approach. He collages motifs from ethnographic volumes and magazines with neon-colored PVC foils, thus creating constructs of identity that surpass all barriers of space and culture. In so doing, he uses the collected and the found. Since the beginning of his artistic practice, Costa Vece has worked consistently with found material. He himself says that the material forms the starting point for the idea, concept, and form taken by his work. By way of the found objects of our time and our world, Costa Vece’s work possesses a link to reality that is palpable to all.