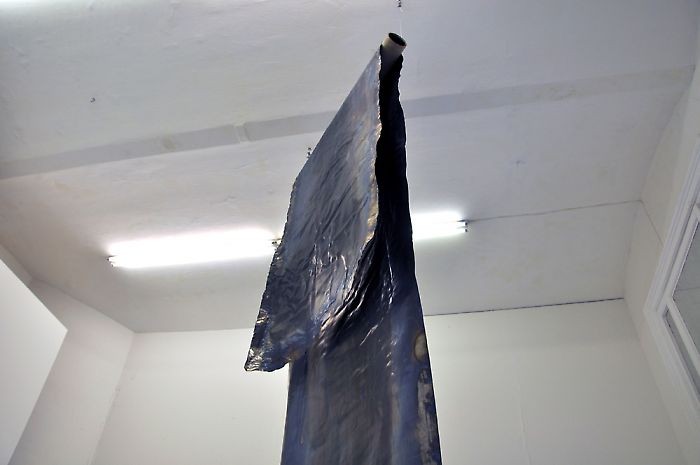 At the exhibition space Georg Kargl Permanent we present a new work by Erwin Thorn in the exhibition Aropros Blein: Considering Words, the Eloquence of Foil. As the title already indicates, at issue here is an installation conceived especially for the space that is the result of an approach to lead as a material. In so doing, the artist playfully explored its composition as well as the perspective of perception. Just as in Thorn’s early works from the 1960s and 1970s, here too a curiosity about the execution of formal concepts, an interest in visual communication, as well as irony and humor are central to his work.
The initial inspiration for his engagement with lead foil was a visit to an exhibition in 2005. In using the metal, Thorn empirically developed a new understanding of the material that lead him to conclude that it is a “material without memory.” It can be altered in shape without any resistance and metaphorically forgets its original form. At the same time, each change is inscribed in the five meter long lead foil; each intervention leaves its traces.
With the various ways and forms in which lead can be used, in all its aggregate states, for issue at issue is ultimately the “eloquence” of the foil itself. This serves best as a reference for lead. The ultimate character of the work as it is presented now in the exhibition space is the result of a process of “regressive” revision and implies from the very start a certain degree of failure.
The work of this artist, born in Vienna in 1930, can be located in the context of the conceptual avant-garde. Initially influenced by Karl Prantl, bythe mid-1960s he was soon participating in exhibitions from the realm of the ZERO group. All the same, Thorn’s work remained a very autonomous, singular position. His work has been on view at individual exhibitions at the Museum des 20. Jahrhunderts, Galerie im Taxispalsis in Innsbruck, and most recently at Georg Kargl BOX.
www.georgkargl.com