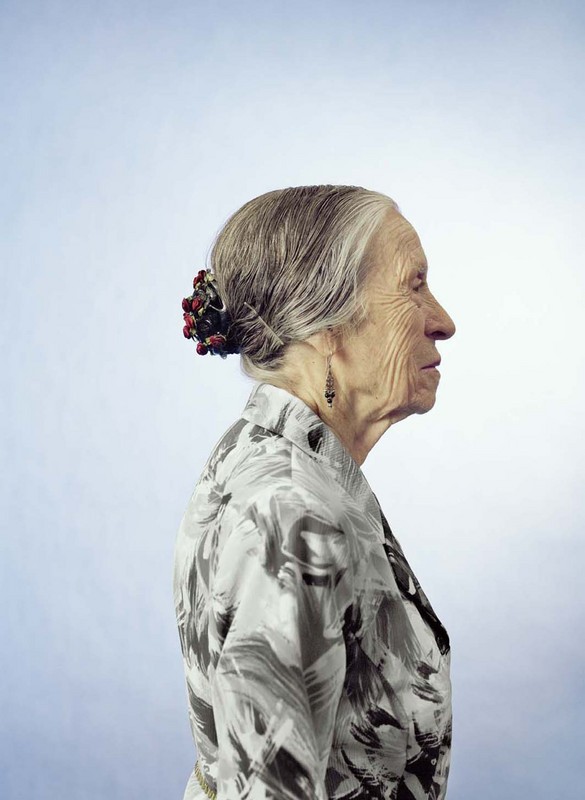 In the work of Jitka Hanzlová (born in 1958 in the former CSSR), autobiography, memory, and the question of identity play an important role. She constantly pursues the issue of the relationship between the individual and the space surrounding him or her, exploring at the same time the ways in which one’s homeland and environment shape identity. Hanzlová attempts to plumb her experiences in her photography, creating a body of work that is poetic and true.

In There Is Something I Don’t Know (2000, 2007-2012), Jitka Hanzlová began to explore the potentials of Renaissance archetypes, an era that marks the beginning of the formation of the concept of the individual and identity. She began this work with a portrait in 2000, which would later become the foundation for her further engagement: referring to the tradition of the Renaissance portrait, which claimed to communicate the special characteristics of an individual, Hanzlová focuses her gaze on people she encounters, yet who seem to come from a past time. The works on view at Georg Kargl Fine Arts are interrogate identity in today’s globalized world and are a product of an emphatic link between the photographer and the person portrayed. The relationship of trust created in this way allows the individual portrayed to turn inward. The portraits, created in quiet, emotional dialog, are able to preserve a secret and create a special resonance that goes beyond physical verisimilitude.

In 2007, parallel to the portraits, Hanzlová also began her new group of works Horses. Even if these pictures only barely depict horses, they powerfully communicate the essence and the visceral, instinctive qualities of these animals. Horses communicate through their clear and direct body language, which is very immediate: they mirror humans. Jitka Hanzlová is able to bring the horse, which in our efficient, technological age is increasingly pushed to the margins of society, back to the center. Each individual photograph, no matter how abstract and seemingly coincidental, possesses an unsuspected direct presence and is able to capture our attention. The horse brings itself into every surroundings, and communicates a link to the earth. The act of taking a photograph takes place in an intuitive, brief moment, and marks a pinnacle, which however is preceded by an emotional moment and unites the entire dialog between human being and animal. Across a timeframe of seven years, images were created that take on their strong expressiveness through proximity and intimacy, allowing us to grasp the artist’s profound relationship to these animals.
www.georgkargl.com