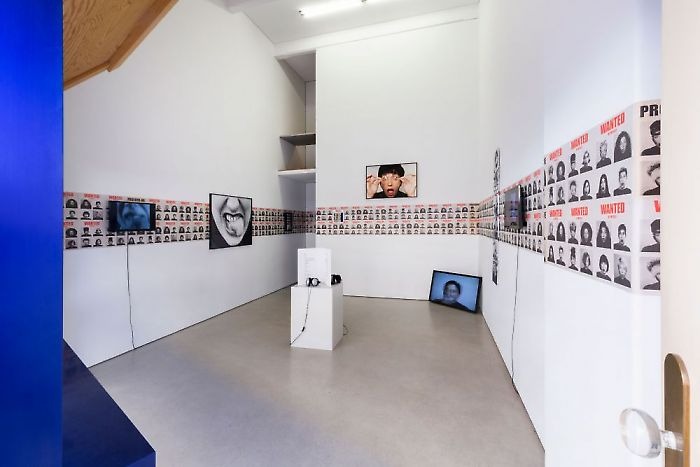 Georg Kargl Fine Arts is proud to present the work of renowned Brazilian artist Lenora de Barros for the first time in Austria. The exhibition, on view from June 27 until October 12, will feature a curated group of works representing the gamut of her artistic practice, from 1979 through 2019, including photography, video, multiples and an installation enveloping the Georg Kargl Box.

“I have always been interested in the contact between languages, in generating meanings through the confrontation of different languages, particularly the verbal, visual, and acoustic aspects of words. I derive great pleasure in creating relations between codes by means of juxtaposition and contamination — working at the limits, at the borderlines. There is no fixed rule in my creative process that determines priorities or hierarchies. At times, it is a word, a sentence, a budding verse that crops up, and from that element I establish the visual and oral expression ascribed to that ‘content’. At other times, the process is reversed: the visual language imposes itself first, and the text follows. Sometimes, I create “pure” texts or just photographic images, visual sequences (videos) or just objects, object-poems and/or installations, where the various language forms blend into a dialogue (or a ‘trialogue’), so as to produce variousmeanings.”

The exhibition highlights LB’s unique amalgam of visual poetry and language-based performance. The artist draws inspiration from Brazil’s richly experimental modernism, from Oswald de Andrade’s concept of cultural anthropophagy (1920s) to Concrete Art and Poetry (1950s), of which her father was one of the main practitioners. Included here are some of the artist’s most iconic works, starting with one of her first visual poems, Poema (1979), a photo-performance composed of a series of 6 black and white photographs depicting the artist's tongue coming into contact with the keys and mechanisms of a typewriter.

An important group of LB’s unusual and extraordinary poems created during the late 70s and early 80s were published in her first book Where It's Seen in 1983. Some of these poems dispensed with words altogether, and were instead constructed as photographic sequences wherein the artist acted out different characters in performative actions. The book carries LB’s unique voice, informed by a Duchampian twist, often employing irony and referencing the feminine universe. One such poem is Laugh/Cry (1975), comprising two mirrored “scores” with a written sequence of sounds relating to the act of laughing and crying that overlap. This work is presented here as a plexi-mounted folding multiple with an audio component performed by the artist.

Prominently featured in the recent groundbreaking exhibition “Radical Women,” Homage to George Segal was the artist’s first experiment with video in 1984. The video sequence shows the artist frantically engaged in the banal action of brushing her teeth, the foam gradually developing into a sculptural mask that obliterates her face, ultimately recalling the signature plaster-bandaged figures by the American artist George Segal. This performance had been staged earlier by LB in 1975 and served as a starting point for the video. Both the 1975 sequence of black and white photographs and the 1984 video are featured.

As made evident in the exhibition, the artist’s mouth (as subject and as site) figures prominently in numerous manifestations throughout her oeuvre: as a stand in for the spoken language, as a means of inferring violence, and as a sign for open sexuality and individual expressivity. LB’s photo-performance In the Land of the Great Tongue, Give Meat to Those Who Want Meat, which shows the artist forcefully biting her own tongue, was created for the 24th Bienal de São Paulo in 1998. It was the artist’s response to Oswald de Andrade’s Cannibalist Manifestoof 1928, which proposed cultural cannibalism as a form of resistance to European colonial cultural domination. The artist later redeveloped this work in new mediums such as the video performance that is part of this exhibition.