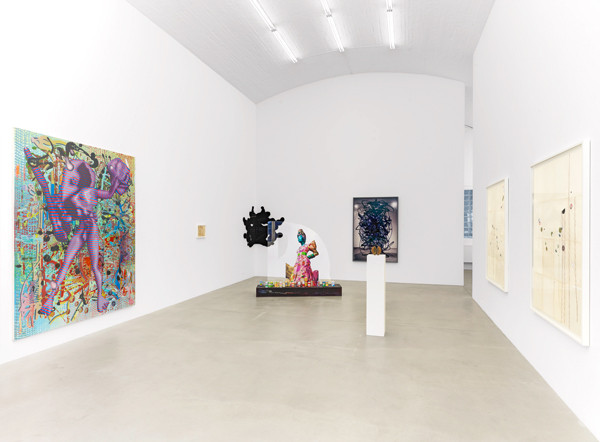 Gerhardsen Gerner Berlin is delighted to present a selection of works by various artists of the gallery.

The main room of the gallery is dominated in terms of colour by the early Markus Oehlen painting, Das Friseur (1999/2000). One is immediately faced with it on turning the corner. The image is criss-crossed with gridded structures and at its centre stands an organic form reminiscent of a human silhouette. Its left hand is lifted and intertwined, its fist clenched in what could be a threatening gesture.

The large format Oehlen piece emphasizes the intimacy of the small, delicate pastel painting by American artist Amy Adler from her series Runaway (2010). The work shows the face of a young girl in extreme close-up. The person shown is a young actress, who is also starring in some of Adler's short films and the pastels of the series are based on stills from the artist’s own films.

Dirk Stewen is represented with two new confetti works, Untitled (Soft Corps XVII) and Untitled (Soft Corps XV III) on antiquarian paper. They are the logical consequence and antithesis of his earlier black confetti works. The aged and stained sheets of paper are contrasting the fresh, filigree confetti and string compositions. At the same time, the confetti circles are taken from reproduction graphics of previous work by Dirk Stewens. Thus they are focussing detail and serve as a kind of peephole.

The work Untitled (Scribble) (2008) is by the Norwegian artist Vibeke Tandberg, who has been known for her digital photo collages. Digital imaging has provided ways of questioning both, photography’s truth claim as well as concepts of identity and gender roles by means of manipulation of images. Untitled (Scribble) shows a photographically enlarged version of the full-body image of a person who has been "wiped out" in a wild analogue gesture with a broad, black marker pen. Only her bare feet in trainers peek out from the scribble.

Jim Lambie’s corner piece Sympathetic Anaesthetic (2008) is a collage of fan posters, which reflects into itself like a Rorschach inkblot. The black skin of fabric made out of Fan T-shirts, however, eliminates any attribution – yet it leaves behind an impression of what could be an elegant black ‘mask’, reminiscent of Late Baroque masquerades.

The sculpture Glorious Gloria installed on a plinth in the middle of the exhibition space is by Danish-Swiss artist couple Yarisal & Kublitz. What we see at first is merely an opened coconut. Yarisal & Kublitz’s works are not dissimilar to traps in that they instinctively retrieve the moments of surprise that arise when we realize that, although things seem quite normal, on closer inspection they are rewriting their immanent codes, hence suddenly changing meaning and context... Thus is revealed on closer examination the idiosyncratic interior of the nut.

Lothar Hempel is represented with two sculptural works. Fata Morgana (2011) recalls by its play of colours an experiment in chromatics. An African model clad in an opulent, colourful ethnic designer dress is towering over of a collection of beverage cans, which are seemingly ordered according to their colour. Even the black base of the installation seems to have an ongoing colour-scheme with its traces of thread inscribed within.

PLAKAT I (Gespensterliebe) (2007) can be found on the front side of the small exhibition space. It shows ballet dancer Mikhail Baryshnikov in ‘spiritual connection’ with a female model. The faces of both persons are characterised by their tenseness and concentration, their connection is explained mainly by aspect of the material used.

A small-scale work on paper, Untitled (2011) out of Carroll Dunham's series of female bathers flanks the room. Situated in varying ecstatic poses with arms extended out and upwards, legs submerged under translucent washes of bright and dirty blues and hair splayed in bold graphic lines, Dunham's figures are both in and of their surroundings, composed of recurring motifs that are at once subject matter and formal devices.

Yet another ‘trapper’ is represented here with his work – located in the centre of the small exhibition room is Andreas Slominski’s Raubvogelfalle (Habichtfalle) von 1992. These rather absurd seeming decoys, at the interface of sculpture and functional object, can be read also as a commentary on both the deceptive and seductive power of art.
www.gerhardsengerner.com