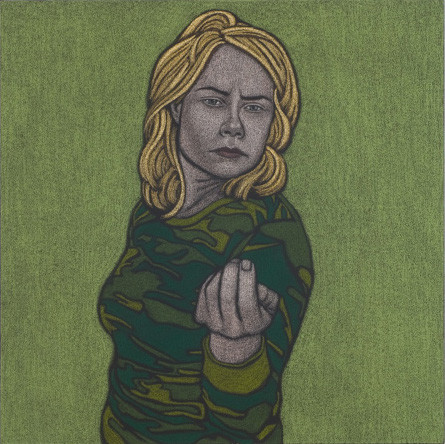 For her third solo show with c/o – Atle Gerhardsen L.A. based artist Amy Adler will present seven new works entitled Phantom Instrument. These full color pastel drawings on canvas depict the artist in various poses. In each drawing she appears to play an instrument, possibly a cello, a violin or a flute. Adler leaves the instrument invisible, in it's absence both the artist and viewer must imagine the instrument exists.

In her two previous shows with Atle Gerhardsen Amy Adler addressed absence and the instrument in likewise indirect ways. In the exhibition The Only One in 1999 Adler was seen playing chords on a guitar in a series of six photographs from pastel drawings. Only those who played guitar themselves could ‘hear’ the works. Likewise, in the show Young Photographer (2003) a young boy holds a camera, his oversized zoom lens focused on unseen things outside of the frame.

Adler has often performed in her own works, while other times she has taken a more directorial role. In Phantom Instrument the artist draws inspiration from 70's performance works of Francesca Woodman and Ana Mendieta among others. She further considers the choreographic works of Yvonne Rainer and Simone Forti as well as the collected lectures of John Cage entitled "Silence". The physical act of drawing is mirrored in the awkward poses the artist holds.

For the past several years Adler has veered from the process for which she is best known, namely unique photographs of her own drawings. No longer photographing her works she presents the original drawings. In her photographs, it was the drawing that was invisible, here she substitutes the instrument in it is place. In these and other recent works Adler continues her exploration of the unobtainable but employs different strategies for her investigation.