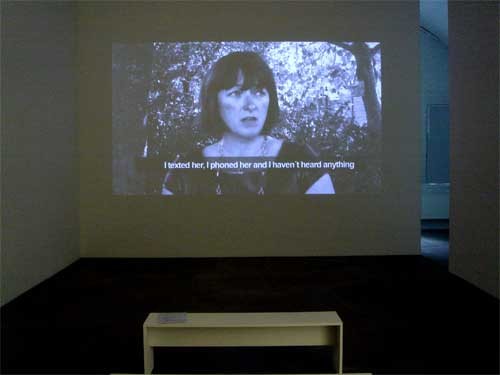 We are very pleased to announce our fifth exhibition with the Swedish artist Annika Ström. Annika Ström will present her current film project during this new show with c/o – Atle Gerhardsen. To date, the artist is especially known for her video art, songs, music clips and text pieces. In the exhibition the announcement of a full-scale film to be produced in 2009 takes on the form of a five-minute film "After Film – trailer" (2008), hereby becoming an artistic event in its own right.

In her art, Annika Ström always entertains the option to disrupt and derail the course of events, often in an amusing manner, serving to trigger thought processes and question things with a sense of humour. Failure is a recurring theme in the artist's work, and similarly to in the video "The missed concert" (2005) she alludes to this human quality in "After Film –trailer": "Failing as an artist and failing as a human being are recurrent themes in Annika Ström's work. Her songs, text pieces and films all touch on the question of inadequacy – if not miserable failure. The content and aesthetics repeatedly play with the notion of imperfection. Ström's text pieces are clearly hand painted, the videos include shaky, blurred images, and her rhythm-box compositions flirt with an amateurish Eurovision aesthetic.
(...)
After film (...) documents Ström's incompetence even before the failure has become a fact. The video predicts the artist's first feature will be a total flop. Upon the film's release in 2009, friends from Ström's neighbourhood in South England are questioned about the sudden disappearance of the film maker and her son. Some speculate that she has quit her career as an artist to join an aid program for children in Argentina – or was it Indonesia? All in all, After film is not only about failing. It plays with the romantic notion of secretly leaving your old life behind to begin a new." (Lotte Møller)

Parallel to this show onestar press will be launching Annika Ström's third artist book.[1] The book poses as a link between the artistic and actual reality: it finally seems to provide the visitor with a sign of life from the vanished artist.

In autumn two solo exhibitions in the Bohuslän Museum, Uddevalla and Ystad Konstmuseum will be showing the artist's work.