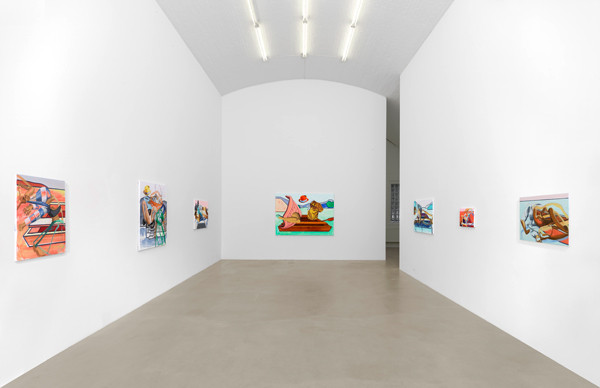 Gerhardsen Gerner is pleased to announce its first solo exhibition of an exciting group of new works by the American painter David Salle (*1952 in Norman, Oklahoma).

David Salle is among the most important contemporary American painters, and his work has been cited as an influence on a broad range of other artists working in a variety of media.

Salle’s education began with mentor John Baldessari at California Institute of the Arts, Valencia, near Los Angeles, where he studied visual arts, film and theatre, as well as ballet, music and philosophy. Passages in Salle’s work not only reference artists like Robert Rauschenberg, Frank Stella and Andy Warhol, but also more diverse cultural figures such as Ludwig Wittgenstein and Jean-Luc Godard. Painting and drawing as well as film and installation, performance and stage design can all be associated with Salle’s work. As a painter whose work comes out of a tradition of installation and performance, Salle also designs sets and costumes for ballets and operas.

In his newest works, as shown in our focused cycle of 19, mostly small format canvases, David Salle develops an open-ended, yet concise visual poetry. His paintings seem to announce the end of painting’s grand narratives and how these narratives dissolve into numerous incompatible truths. His breathtaking and complex compositions set up a coexistence and an interweaving of heterogeneous material. The synthesis of two-dimensional, schematic drawing, Surrealism and old-masterly perfection gives the group of works presented at Gerhardsen Gerner a very unique character. The paintings are subtle and nuanced, and yet have an immediate visual impact.

In the large scale painting Lookout, 2010, the viewer sees an Adirondack chair in the lower part of the painting, and a female body in stage of undress in the upper part. The body is rendered in economical precise thin washes which somewhat paradoxically increases a monumental sculptural presence. In these paintings as a group, there is a reciprocity of body, object, solidity, transparency, of inside and outside – which results in a feeling that the paintings just „happened“ more than that they were „made“. At times, it is as if the painting is caught unawares, in the midst of arranging itself.

Salle works primarily with composition – there is an analogy in his method to that of an orchestra conductor, or a choreographer. In larger works, Salle cites from art history, and then superimposes upon a somewhat schematic ground, motifs from cartoons, advertising, still-life painting, and the like. In some paintings, he places fresco-like nudes, tapestry-design elements, shells, pensive female portraits, objects like rowboats, fabrics or sculptures in the centre of the canvas. One moment the viewer tastes a bit of commercial materialism, the next moment, suburban theatre or even a little sex. Salle hereby never spotlights the new, he instead recombines pre-existing ideas with new application like contemporary computer aesthetics. One of the most sophisticated colorists working today, Salle’s figures at times seem to be accidentally exposed on a ground of lush color. The application of the paint appears casual, and yet is finely calibrated to the overall schema.

Over the course of the eighties, Salle quickly became the protagonist of the figurative painting scene in New York. Since then, his works have been presented in many international solo exhibitions, for instance at the Stedelijk Museum Amsterdam, the MUMOK Vienna, the Castello di Rivoli Turin, the Guggenheim Museum Bilbao, the Whitney Museum of American Art New York, and the Museum of Contemporary Art Los Angeles. His works are included in major public collections such as that of The Art Institute of Chicago, MoMA, the Whitney, the Essl Collection Vienna, the Guggenheim Museum New York, the Ludwig Museum Cologne, the Nationalgalerie Berlin, among many others.