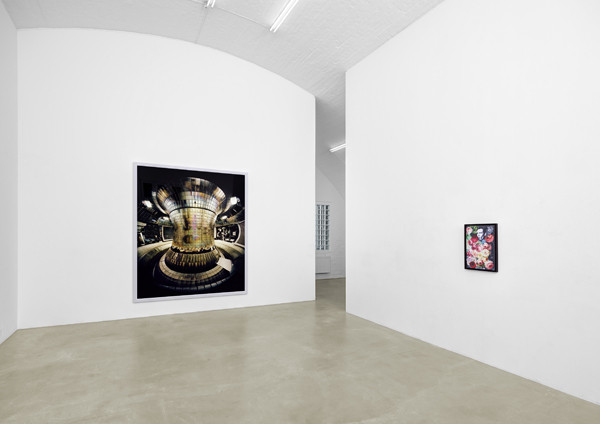 Gerhardsen Gerner Berlin is very pleased to announce our first exhibition with the musician Parra for Cuva. Parra for Cuva will play live on the opening night. In parallel, we will show works of art that can be associated with the theme of music and club culture by Saâdane Afif, Jan Christensen, Liam Gillick, Jeppe Hein, Jim Lambie, Julian Opie, Thomas Struth and Yarisal & Kublitz.

The young electronic music scene in Berlin shines with talents such as Sascha Braemer, Oliver Koletzki, Jan Blomqvist, Solomun, Niko Schwind and others. Parra for Cuva is Nicolas Demuth, and for some pieces he is joined by the singer Anna Naklab, who enriches the electronic sounds with her voice. Parra for Cuva creates a uniquely emotional sound experience, which nevertheless contains a certain lightness.
Nicolas Demuth was born in Cologne in 1991 and studied audio design at the University of Popular Arts in Berlin. He lives and works in Berlin and has produced electronic music under the name Parra for Cuva for two years now. Parra for Cuva has completed training in classical and jazz piano, and thus comes from a background in instrumental music. The piano continues to be an important aspect of his productions.

- Nicolas, how did you come to electronic music?

Parra for Cuva: Primarily through playing the piano (which I've been doing for 13 years now!). A few years ago I wanted to record my piano pieces, so I bought a cheap DAW (digital audio workstation), which happened to include a couple of hip-hop samples.
Quite simply, I started to mix these beats with my piano playing. Eventually, I couldn't stop, so I continued to "educate myself".

- Can I use the term "Deep House" for your music, or would you prefer not?

Absolutely not! There are tracks like Fading Nights, Swept Away, or Wicked Games, that touch on that umbrella term. But in general I consider my music to be a lot more versatile than just Deep House. These days it is very difficult to categorize music within a specific genre, because there are so many ways of combining genres. But I also think that it's not my role to determine what genre it might be. I just make the music. Others can judge.

The first release Fading Night Remixes was released by Delicieuse Musique Records in the spring of 2013, followed in summer by Something Near on the Berlin label Well Done! Music. Parra for Cuva says that they are the two most playful pieces he has ever made. On Wicked Games for example, we hear sounds of analog cameras and steel drums that he found somewhere under the bed, or even a children's toy piano.

The name Parra for Cuva came about during a long night, with the help of a Spanish and Portuguese dictionary. Parra means "between worlds" and Cuva could be a girl's name. Perhaps something like "between worlds for Cuva".
Atle Gerhardsen and Nicolai Gerner-Mathisen got to know Parra for Cuva at various concerts in Berlin's clubs Kosmonaut and Suicide Circle. Nicolai was enthusiastic about the music and tried to get Parra for Cuva involved in an exhibition project. That kind of gallery project initially seemed quite abstract for the young musician, but then while visiting a museum in Japan he came across a work by the British artist Julian Opie, who is represented by Gerhardsen Gerner.

- Can you imagine other projects with the art scene?

Parra for Cuva: Of course! It's something very different from playing in a club, which is rather nice. Because my music is very quiet, my live performances are more like attending a concert than going to a club. I can imagine it actually working well in the art scene.

The track Fading Nights can be heard at http://www. youtube.com/watch?v=Irb4xeklQFU

The British artist Julian Opie (* 1958 in London) uses a computer program in his portrait series to reduce facial features to the essentials using black contour lines, without losing the distinctive character of the depicted person. For Fading Nights he has contributed a portrait from a series started in 2011, depicting ladies of high society in representative poses and surroundings.
Maria 2. (2011) against green background in evening wear delights us with her presence!

The Norwegian artist Jan Christensen (born 1977 in Copenhagen) will be represented with a new wall painting. From the beginning of his artistic career, Jan Christensen has worked across a range of media and made intensive use of the spectrum of options offered by the most varied of media. He thus incorporates elements of design, sound and light art or photography in his works, or collaborates with architects and creates installations of sound machines that can only function through visitors' actions.
His projects often move beyond the traditional exhibition space and its limitations. Christensen's work will welcome visitors before they enter the Fading Nights exhibition.

Thomas Struth (* 1954 in Geldern) began in 2010 to create a series of photographs of anonymous sculptures coming from buildings and facilities whose function remains enigmatic to most, confronting the viewer with strange forms of industrial and technological progress. The title Tokamak Asdex Upgrade Interior 1, Max Planck IPP, Garching (2010) enhances the formal character of these photographs, which analyze and document both human ambition and the progress of today's cutting-edge industries. Clubs for electronic music often refer in their design to industrial and circuit board aesthetics in order to visualize the sounds of electronic music.

Jim Lambie (* 1964 in Glasgow) especially refers to the universe of pop music in his work: discos, clubs, nightlife, song lyrics, legendary bands, fandom. For example, his "Zobop" floor installations use multi-colored vinyl tape to achieve through color and line exactly what a visitor to a good club experiences: the pulsation and vibration takes your breath away, you let go and become one with the music.
Jim Lambie will present one of his portraits of musicians that are collaged using old still lives of flowers: Dog Eat Dog (2013), which shows Adam Ant, the lead singer of the successful punk and later new-romantic band Adam & the Ants in the 1980s. The black-and-white picture of the singer gazes dreamily to the right, out of the picture, entwined with flowers. His hair seems to continue in a bouquet blue flowers.
Deep Inside (2013), is a tribute to Aldous Huxley, the British writer who is famous for, among other things, having written Brave New World. In bright yellow and pink, framed by two large quotation marks, stand Aldous Huxley's last words, which he wrote to his wife on a piece of paper: "LSD 100 mg, i.m. "

A shining silver balloon by Jeppe Hein (* 1974 in Copenhagen) clings to the ceiling of the exhibition space above the heads of visitors. It moves gently whenever there is a draft. Because of its shape and its reflective surface, the balloon produces a distorted view of the surrounding area and the viewer. Only the ceiling seems to prevent the balloon from rising up into the air and expanding the reflection into infinity.

Liam Gillick (* 196 in Aylesbury) shows the work Big Conference Center Renovation from 1998. For this, the entire floor of the gallery was impregnated with single malt whisky and silver glitter.

A central part of the working method of Saâdane Afif (* 1970 in Vendôme) has for quite some time been to commission texts from fellow artists, curators and critics on the basis of his project proposals in order to translate his work into another medial register. Mostly, these contributions are then funnelled back into the corresponding exhibition as wall texts, providing an embedded layer of reflection. Some of them also serve as song lyrics, set to music by Afif in collaboration with musicians.
Yarisal & Kublitz' (* 1981 in Geneva and 1978 in Copenhagen) works function like traps. They instinctively seek that moment of surprise which arises when we realize that, although things seem quite as usual, on closer inspection they suddenly turn out to be completely different than they appear, thus changing the meaning and the context.
Charlie & George (2012) is a copper object with a triangular body. Five rolled dollar bills are inserted into a drawer on the top of the triangle and are available for the potential consumption of whatever intoxicants happen to be available.
www.gerhardsengerner.com