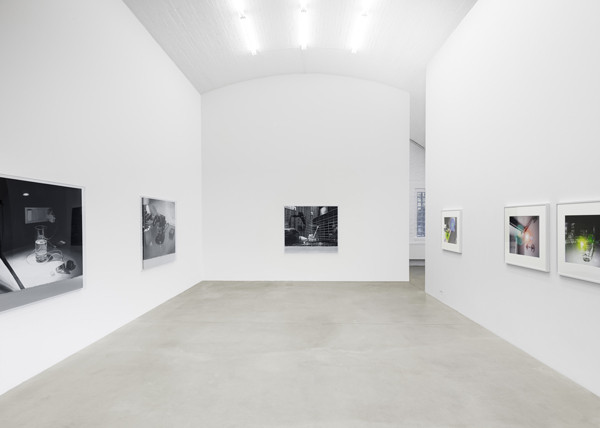 Gerhardsen Gerner is pleased to open its autumn with the third solo exhibition of the British artist James White.

With Another Hotel James White presents five new paintings on aluminium and a series of five new photographic pieces.

The monochrome paintings show precisely demarcated cuttings taken whilst occupying anonymous hotel rooms across Europe. These could be read as diary entries from a nomadic life, were it not for their cold, silent, almost artificial elegance and the systematic omission of any sense of private atmosphere or comfort.

Indeed, the smooth, reflective, black surfaces emphasize the central position of quotidian objects hailing from a consumption-orientated life, such as the iPhone, Coca Cola cans or video game controllers. Through this, White devotes particular attention to the game of contrasts played between those areas of the image rich in light and those receding into the shadows. Lights illuminate the diverse parts of the paintings and react to the texture of the materials, appearing either matte or reflective, while objects are thrown back mirrored from the sleek surfaces. In general, White has a sensitive feel for the quality, composition and characteristics of the surface. The objects he depicts convey their original feeling and texture, while their materiality arouses an interest in the standard of perfection laid down by old masterworks. With an extraordinary meticulousness, White pursues the folded arrangement of curtains and, in what the tradition of painting has counted as the test of a master's hand, the refraction of light as seen through a glass object containing water. The theme of mirroring appears to be pervasive in all five paintings, a theme that art historically has always been connected with self-reflection and a critical gaze towards circumstances.

Initially, the artist uses his own photographs as the basis for his paintings. Now, for the first time, James White exhibits photographs from the new series Abstract Thoughts, also taken in hotels and along his travels. Moreover, the first sight of color is born: large, round, colorful reflections spread out over the black and white photographs, negotiating the impression of "blended-ness" and alienating that which is represented. Two of the photographs are additionally troubled through a subtle use of inversion, what at first glance may be only barely perceptible in the shiny, reflective black and white distortion of reality.

James White (born 1967, Devon) studied at the Royal College of Art in London. He lives and works in London. His works have been shown in internationally renowned institutions such as the Goss-Michael Foundation in Dallas, Kunsthal Rotterdam, Neues Museum Weserburg and the Institute for Contemporary Art in London.
www.gerhardsengerner.com