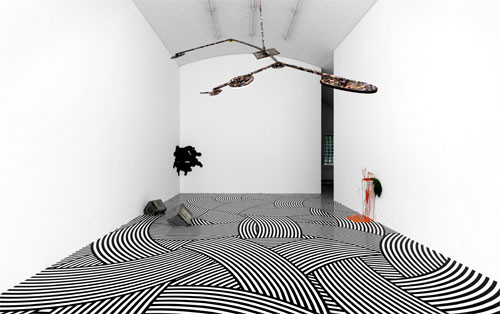 We are greatly pleased to announce the first exhibition of Jim Lambie at c/o - Atle Gerhardsen. In his first solo show in Berlin, the artist will transform the gallery into an installation tailor-made for the architecture of the space.

Jim Lambie created his first Zobop floor installations with multicolored strips of vinyl tape: in these works, the geometrical contours of the pool of color expand into the room, vibrating as the pulsations seem to move the viewer. Lambie's art breathes the atmosphere of trendy, glamorous clubs, preferably places where music is made at the pace of life. The Zobop installations evoke 70’s glam rock in the exhibition space, visualizing the throbbing music and psychedelic dance floors, where in the heat of the moment everything seems possible.

"My materials and installations often infer the kind of performance you get in a nightclub, I guess, there could be an energy rush which one gets from entering a disco. Or in the case of the floors, what I enjoy is how the floor can activate other objects in the way a dance floor does people (Jim Lambie in an interview with Sinisa Mitrovic).“

Jim Lambie will pave the floor of the gallery in black-and-white vinyl. In contrast to the brightly colored geometric forms in other architecturally geared installations, here he makes use of a kind of wave motif, reflecting the water of the Spree river flowing by the gallery. Lambie calls this pattern "The Strokes", after the New York rock band, with a double reference to brushstrokes in painting. The unity is interrupted by seven cubes of concrete, rising up out of the sea of waves.

The "Soulstick" casually leaning against a wall -a bamboo stick wrapped in string and cloth, with interwoven fetishes- appears to mark both the beginning and end of the entangled stripes, as it conveys its magic energy into the vinyl floor. It seems to be a relict of a mythical ritual, in which rhythmic music is always the key. Collages with posters and flowers complete the installation.

The artist will also use the height of the exhibition space for a hanging "constellation" sculpture, re-enacting astrological zodiac signs with aluminum and mirror components. Each mirror takes the place of a star in a constellation, and not only reflects the psychedelic pattern on the floor, but also the spectator. With his work "Silver Clouds" in the Leo Castelli gallery in 1966, Andy Warhol released silver balloons filled with helium, which floated weightlessly throughout the room, showing a warped reflection of the visitors. Jim Lambie employs mirrors in much of his work, returning the reflection of the viewer and the surrounding objects, hereby triggering a self-reflexive process.
With his comprehensive installations the artist unconditionally adopts the exhibition space at hand, and the works settle into their environment with nearly anarchic occupying force. In this way Lambie's art shapes an extraordinary spectator-awareness of the place in which they are situated.

Jim Lambie was born in 1964 in Glasgow, where he still lives and works. Numerous international solo exhibitions have been dedicated to the work of the artist, and in 2005 he was nominated for the Turner Prize. From 6 March to 24 October his work can not only be seen in the group exhibition "Thyssen-Bornemisza Art Contemporary - Collection as Aleph" in the Graz Art Museum, but simultaneously also from 11 April to 29 September in the solo exhibition "Forever Changes" in the Glasgow Museum of Modern Art and in the group exhibition "Sympathy for the Devil: Art and Rock and Roll since 1967" from 31 May to 8 September in the Museum of Contemporary Art North Miami.

On 1 August, the ACCA in Melbourne will be opening a solo exhibition with Jim Lambie (running until 21 September 2008) and in November, the Hara Museum of Contemporary Art in Tokyo will be showing some of the artist's work.