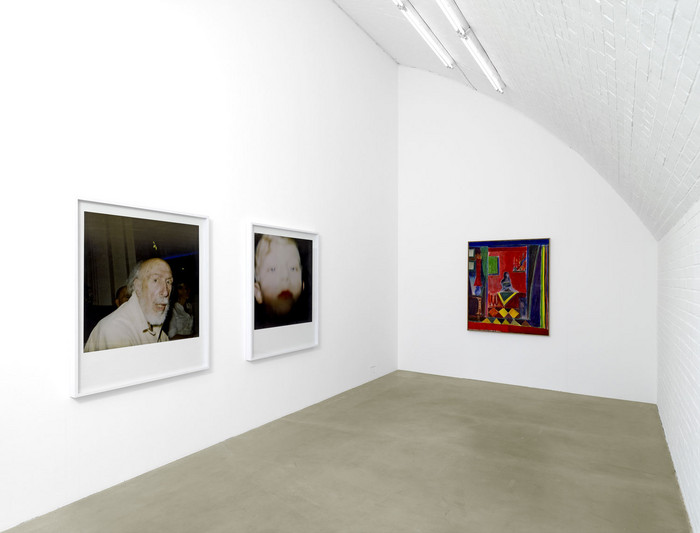 Portraits brings together the work of ten international artists in a focus on contemporary portraiture.

The tradition and premises of the portrait have changed dramatically: painting and photography are no longer its privileged media and only rarely is it executed in praise of a celebrated individual who symbolizes the state and its institutions. In fact, the new portrait might appear at first glance completely devoid of human affiliations.

As Michel Foucault famously concluded in his book The Order of Things (1966), “man is an invention of recent date,” an invention held together by certain hierarchies of knowledge. If for any reason these hierarchies were to crumble, “then one can certainly wager that man would be erased, like a face drawn in sand at the edge of the sea.” Similarly, when the ground beneath representation erodes, portraiture’s means and methodologies begin to challenge artists in new ways.

Several of the artists included in Portraits might be unexpected. The installations of Michael Elmgreen & Ingar Dragset, for example, are usually depopulated, the human reduced to a trace or simulacrum. In many ways, Gay Marriage (2010) plays with the traditional portrait’s mechanisms of recognition by questioning how homosexual marriage — still a controversial subject — might engage the viewer. Or perhaps it is simply an image of the emotional entanglements that invariably stem from married life.

The 2010 Turner Prize winner Susan Philipsz contributes to the exhibition with one of her signature sound works, Songs Sung in The First Person on Themes of Longing, Sympathy and Release (2003). Philipsz’s work is presented in collaboration with Michael Fullerton, whose screen prints show family portraits of Paddy Joe Hill, one of the “Birmingham Six” who were unjustly convicted in the bombings of two Birmingham pubs in 1974.

The artistic legacy of Andy Warhol hovers over Anselm Reyle’s Little Cody (2010), a partially completed paint-by-numbers portrait of a dog. Warhol elevated the familiar Sunday Painter’s kit to high art, adopting its mechanical performance of painting in the name of Pop Art. In Reyle's version, however, either the numbers denote a seemingly punk colour composition or the application of colour and materials follows an idiosyncratic pattern.

Knut Henrik Henriksen’s geometric steel sculpture Monument of Doubt XV (2009), presented atop the crate in which it was transported, calls to mind Constantin Brancusi’s 1929 symbolic portrait of James Joyce, which depicts the Irish author through a set of abstract notations: three vertical lines and a hypnotic spiral reduce the sitter to a state of mind, a transformation to a literary mode of being. A similar analytical procedure is at stake in Henriksen’s work.

As spontaneous or even naïve as Tal R’s paintings may appear, he approaches his work in the same deliberate and strategic manner with which a martial arts fighter engages his opponent. As a result, Tal R imbues painting with raw mythology and methodological savvy reminiscent of modernist painters such as Picasso, whose combination of brute painterly force and sly tactical moves within the field of art history are widely celebrated. Tal R created a new work for Portraits.

Douglas Gordon’s previous work with portraiture includes the sound piece Something Between My Mouth and Your Ear (1994), in which the visitor could hear the various popular songs Gordon's mother might have listened to while the artist was still in the womb — in other words, a self-portrait that is not based on physical likeness or identification, but on generic cultural signs that contribute to forming a subject at the limit between existence and nonexistence.

According to myth, the devil waits at the crossroads. Lari Pittman’s dense and elaborate canvases place painting at the heavily trafficked intersection of art, folklore, and the culture industry; here, forces battle for the viewer’s attention — and very soul — in unlikely and stimulating meetings. The ethos of bastardization in Pittman’s work is present in a double-edged sensibility that is as warm as applied art and as cool and semiotic as appropriation. Pittman’s work Untitled #9 (2008) depicts a couple, dancing and wearing large hats along with a pair of testicular lanterns.

The viewer always has a place in the work of Olafur Eliasson, whether through the ecstatic dimension of his large-scale installations or the human interaction elicited by his titles (Your Sun Machine or Your Spiral View, for example). Folded Ellipse 75° (2008) is a tilted, elliptical mirror that opens up space from a corner, offering a vista into what seems to be another dimension through the broken self-reflection perceived by the viewer.
www.gerhardsengerner.com