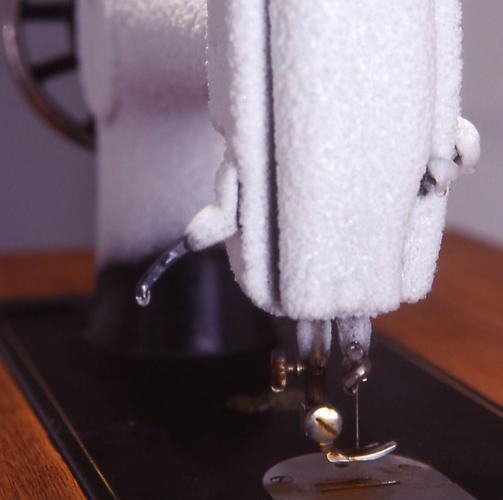 JANE SIMPSON
"My Inheritance and Other Bloody Tales"

Gering & López Gallery is pleased to present My Inheritance and Other Bloody Tales, a solo exhibition of new sculptures and drawings by British artist Jane Simpson. "Through relics modeled using such unconventional materials as silicone or ice, Simpson composes a discourse which speaks of memory, the past and nostalgia" (Fernando Francés, Director, CAC Malaga, 2004). The blood she speaks of remains flowing within the body, the inheritance is in both gene and object form, and the tales are there to be consumed.

Objets Trouve
The tales are told in elegant lacquered boxes. They feature both made and found objects; a mixture of antiquities from flea markets, junk shops and eBay, the great junk shop in the sky. Others are closer to home: antiques collected by her mother and physical artifacts of the artist's childhood memories. Simpson feels these heirlooms will be immortalized as art works, and set free to begin a new life, away from family commitments.

Family Ties and Familiar Traits
"...her arrangements of objects present themselves like family portraits...suspended in time" (Louisa Buck, Tableau, 2004). Elements from the Simpson sculpture family are present and diverse. The exhibited works are made from ice, silicone rubber, wood, precious metals, glass and ceramic. Simpson equates the production of her exhibition to making a large and elaborate meal, collecting pertinent ingredients of the season, as well as some local flavours.

Neighbours from the Not So Distant Past
For many years, Simpson has had her feet solidly placed in the past, now allowing her to leap into her future. Communication with other artists is of great importance to her: "Life can be a bit dullish without them," she says.

The Crown Building, already renowned for its architectural beauty, also hides a lesser-known cultural fact. From 1929 to 1931, it housed the first Museum of Modern Art. Simpson has engaged in an "84 Charing Cross Road" style of communication with the MoMA, which has supplied her with numerous checklists from exhibits during these early days. While conceiving this new body of work, Simpson surrounded herself with many images of artworks from this time. Echoing and reflecting in these new pieces are a hint of Edward Hopper, a direct flirt with Arthur Dove (Jane is showing her drawing I heart Arthur Dove) and a stroke of Georgia O'Keeffe.

Welsh Roots
The centrepiece of the exhibition is The Dresser, an item maybe not so important in the age of the sofa, but once the prized piece of furniture in the Welsh family home, displaying and explaining the family history and wealth. They were utilized as vast storehouses of memory and objects, hosting wedding presents, the best china and crockery barely used. Reflecting even the most formal of family portraits, Simpson's dresser is practically alive with palpable tension.

Jane Simpson, born in 1965, lives and works in London. She graduated from the Chelsea School of Art in 1988 and earned an MFA from the Royal Academy of Art in 1993. In 1994 she was included in the seminal exhibition "Some Went Mad, Some Ran Away," curated by Damien Hirst, at the Serpentine Gallery, London. Simpson's work was also part of the controversial "Sensation" exhibition of 1997.

Recent solo exhibitions include: "A Three Way Conversation with Myself" at the New Art Centre, Roche Court, Wiltshire (2005); "Tableau" at CAC Malaga (2004); and "Somewhere (between freezing and melting) there lies passion" at both Galería Javier López, Madrid and Sandra Gering Gallery, New York (2004). Recent group exhibitions include "kissingcousins" curated by Jane Simpson and Sarah Staton at the Henry Moore Institute, Leeds (2007); "Weather Report (Art and Climate Change)" at the Centro Atlántico de Arte Moderno, Canary Islands (2007); and the Valencia Biennale (2005). Simpson's work is part of many public and private collections including the Saatchi Collection, Arts Council of England, Damien Hirst's Murderme Collection, British Council and the Colección Ciudad de Pamplona.

Jane is currently the production manager of a portfolio of prints called "House of Fairy Tales," which includes work by Dexter Dalwood, Cornelia Parker, Sir Peter Blake and Gavin Turk. The portfolio will be available in Spring 2008. Sales benefit the London based non-profit, "House of Fairy Tales."
www.geringlopez.com