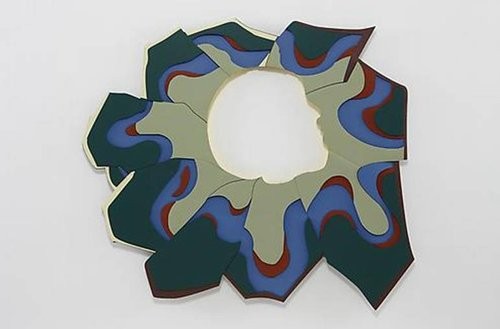 Continuing to experiment with software and robotic fabrication, Simon adds another dimension to the translation of his drawings from the digital to the physical. The new bas-reliefs made of wood and formica in Simon's current exhibition elaborate on his long term fascination with automated mark making.

In his first exhibition with Sandra Gering Gallery in 1998, Simon showed pen-plotted ink drawings on paper generated from software tools he wrote called “Mobility Agents.” This new body of work relies on similar computer control to realize larger scale pieces. By layering line, color, and material, Simon invites you to “consider how things are defined by what surrounds them.” The innerhole calls attention to the negative space at the center.

The conceptual aspect of the work reflects Simon's deepening dedication to drawing and understanding the sources of his own creativity. For the past eleven years, Simon has committed himself to a daily practice of drawing through which he observes his own intuitive markings, posting them on iclock.com. He then seeks to codify these improvisations, interpreting the drawings through different media including software, paper and wood. In setting out to automate improvisation through self-observation, he is guided by the practices of artists like André Breton, Jean Arp and John Cage, whose work relies on impulse and chance.

innerhole is John F. Simon, Jr.'s eighth solo exhibition in New York. Born in Louisiana in 1963, he currently lives and works in Orange County, New York. He has an MFA in Computer Art from the School of Visual Arts and additional degrees from Brown University in Providence, RI, and Washington University in St. Louis, MO.

Two works from the innerhole series will be included in the upcoming group show curated by Hubert Neumann, The Incomplete, at Galerie Jean-Luc & Takako Richard, Paris, France. His work is found in prominent museum collections such as the Museum of Modern Art, New York, the Solomon R. Guggenheim Museum, New York, the Whitney Museum of American Art, New York, and the Los Angeles County Museum of Art, California.

Gallery hours are Tuesday through Saturday, 10am to 6pm. For further information please contact Julie Bills at 646.336.7183 or julie@geringlopez.com.

Please join us for a reception with the artist on September 11 from 6-8pm.
www.geringlopez.com