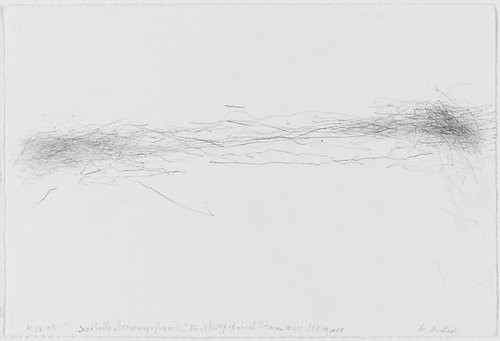 Please join us for a reception with the artist on Saturday, April 24 from 6-8pm.


GERING & LóPEZ GALLERY is pleased to present WILLIAM ANASTASI: Drawings. This will be Anastasi's first exhibition with the gallery, and his fifth solo exhibition with Sandra Gering.

In a recent statement for the Foundation for Contemporary Arts in honor of his receipt of the 2010 John Cage Award, Anastasi remarked that one of his earliest memories was his Italian immigrant mother calmly telling him that "But of course the best thing anyone could be in this world is an artist." Although his canonical works have influenced generations of artists and are in the permanent collections of the most prestigious institutions in the world, Anastasi closed his statement to the Foundation for Contemporary Arts with a quotation from Kant's Critique of Pure Reason: "Nearly through the whole of my work I have felt doubtful what to do." Well-known to art world insiders as the perennial "deadpan conceptualist," there is a strikingly human vulnerability in the artist's oeuvre and method.

Anastasi's practice is interdisciplinary, informed by physics, music, and social thought. Like his close friend John Cage, Anastasi is fascinated by the element of chance in creation. The strongest intentionality in his work comes from his attempts to block out his conscious sensory responses to his surroundings. He has famously blindfolded himself and drawn to the background noise of classical music, making every effort to not allow the sounds to influence his movements. He carries noise-canceling headphones with him while he rides the subway in order to create his own sensory deprivation experience while he produces his Subway Drawings. By attempting to exclude his senses from the artistic process, Anastasi acts as a passive conduit through which Art passes, the perfect example of the ideal Heideggerian artist. Anastasi finds chance much more interesting than volition, and has always thought the aesthetic result of his works was far better when he did not look at the drawing, or when he let a pair of dice decide where the markings should go.

The drawings in this exhibition showcase the conceptual and tangible possibilities randomness brings forth. Works include examples from major series that Anastasi began in the 1960s, as well as new works from the present day such as pocket drawings, subway drawings, constellations, theatre drawings, bursts, and drop drawings. This complex figure, perhaps plagued by self-doubt and on a ceaseless quest for self-discovery, has secured his position as a seminal Artist, and continues to innovate today.