For Official Use Only 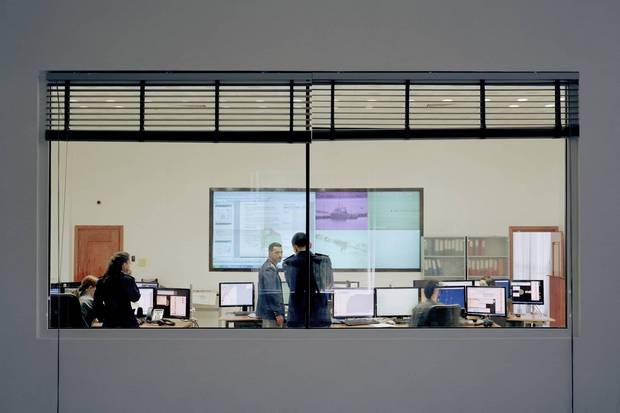 In times of internal political radicalization and resurgent nationalisms, the question of the relationship between identity, law, and community is thrust to the fore. What does Europe entail, whom does it include, and whom does it leave behind?

In an effort to deal with these questions, this year’s winner, Leon Kahane, looks back at the fundamental conditions of post-war European societies. He reflects on geopolitical changes and their impact on the public perception of states and their relationships with one another. Again and again, Kahane draws our attention to events in which history’s inherent contradictions are revealed, that cannot be treated on a purely analytical level. They reflect historical, political, and economic aspects, but also mythical and biographical ones. In his work, he perceives, addresses, and processes these aspects.
Issues such as diaspora, migration, and globalization have an existential significance in Kahane’s own family history. Travel and personal localization are important parameters for his art. Leon Kahane lives in Berlin and Tel Aviv, two cities with very different backgrounds that determine and propel his multifaceted approach.

For the exhibition in the GfZK, Leon Kahane has developed a connective spatial layout whose parts can be read both as an autonomous work and as contiguous elements of a larger narrative framework. Departing from the Michelin Guide published in 1944 by the U.S. Army in order to provide appropriate maps for the liberation of France (For official use only), he traces strategic maneuvers into the present: streams of goods and people, in addition to their regulation by economic and political interests.

The core of the exhibition is a simple but important intervention into the spatial structure of GfZK Villa: By opening up the middle of the building, he creates a perspective that provides a semantic, conceptual, and visual view of current political conditions, tensions, and contradictions. By means of altered spatial relations, Kahane also generally questions the routines of reception. His aesthetic operations present their arguments at the interface of reference, material, and medium. Their target is the ideological core of the institutional framework of presentation. The complexity of digital media as a document of social reality can be found here as well,as can the pressure to expand political debate by a horizon of physical experience.
www.gfzk.de